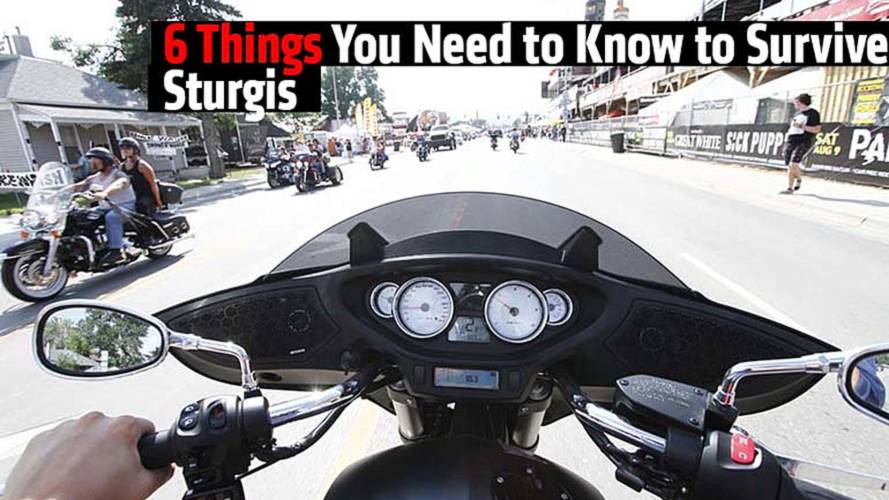 Sturgis is a marathon, not a sprint. Here's some advice on surviving one of the biggest motorcycling events in the world.

Sturgis. That's really all you need to say. Technically, the annual South Dakota gathering of motorcycles and motorcycle culture is known as the Sturgis Motorcycle Rally, but just the one word will do. The world's largest motorcycle rally, it attracts upward of 700,000 people a year.

READ MORE: The Sturgis Rally: Then and Now | RideApart

Filled with every type of bike imagined, giant parties and too many live concerts to count, it's quite the experience. Also, it's one of the few times you'll see an entire town overrun with motorcycles. Like, the whole dang town.  Unreal. When I first attended Sturgis in 2014 it was the fulfillment of a lifelong dream to experience it, and nothing like we expected.

It started with a group of guys – the Jackpine Gypsies motorcycle club – who held a series of motorcycles races in 1938. Somehow the rally has evolved into this extravaganza of motorcycles that takes in and around the otherwise sleepy little town of Sturgis, South Dakota. The town is so quiet the rest of the year that most the bars and shops are only open during the event.

We did our research, watched a ton of videos and read every travel guide we could before heading there, but nothing was able to capture what it's really like being there for yourself. Here are six things you need to know in order to survive Sturgis.

Watch for Deer and Cops

Both come out around sunset. The police force in town seem to make their bonuses during this week – often camped between the bars on the outskirts of town, like Full Throttle and Buffalo Chip, where it’s a 35-mph speed limit. They’re in heavy force looking for drunk riders and speeders. Don't even roll through a stop sign or run 5 mph over the speed limit unless you want to take home a souvenir from the cops.

Meanwhile, the rally is nestled in the countryside, so you’ll often find yourself surrounded by woods where deer can jump out in front of you. We encountered at least two that were spooked by the vehicles in front of us.

Everything in Sturgis costs money. Everything. If you want to explore any of the numerous state and national parks you can expect to pay admission (these parks offer great scenery, so you may want to consider getting an annual pass – especially in the case of national parks). The Crazy Horse Memorial, which has grown in popularity over the years, also charges admission.

Meanwhile, you can expect to pay a cover charge at most of the bars outside of the main area, especially if there is a band playing.

It doesn't matter what you ride, just as long as you ride and have fun. Yes, it's still mostly old guys on baggers, but that's changing somewhat. There were guys with pieced-together Honda CB750s and Kawasaki sport bikes. It seemed as though no one cared what you rode or how you rode it, just so long as you were there for the experience. Leave the brand-loyalty attitude at home.

Stick With One Thing

There’s so much going on at Sturgis, yet very little. Stick with a plan. If you’re up for the rowdy party life and lack of sleep, then stay somewhere like the Buffalo Chip. Wrist bands are crazy expensive – several hundred dollars for the week – but you’ll see races (truck and bike), swimming, concerts, games, motorcycle shows, and vendors.

Unlike other rallies, It's difficult to pop in and out of different stops. It becomes expensive and dangerous if you’re dropping into different stops and drinking. Few bars list daily schedules online, or anywhere else for that matter, so if you jump around too much it’s easy to miss out on some of the fun.

Camp; Don’t Stay in a Hotel

Grabbing a night in a run-of-the-mill hotel, like a Best Western or Holiday Inn could cost you more than your motorcycle is worth. The week can range around in excess of $3,000 depending on the location. It’s not worth it. Places like the Broken Spoke have great campsites and limited cabins. A lot of the real riders don’t stay in the town of Sturgis but surrounding towns like Rapid City or Deadwood.

The Black Hills are filled with tight twisties, 45-55 mph speed limits, and quaint little gas stations and convenience stores. The beauty and geography of this place is a large reason why Sturgis has evolved into such a big rally. The Black Hills National Forest is gigantic and spreads through the southwestern part of the state. But enjoying it can be a challenge with so many other people around.

If you’re on a motorcycle because it’s a solo experience you should visit Sturgis, just not during Sturgis. Go ride the Black Hills at a different time of year. Grab a hotel when they’re a lot cheaper. One of our favorite rides was heading from Mount Rushmore to Deadwood via US Route 385. The good and bad thing about the hills is that you lose cell phone service. Could make for a bad day, or a great day.