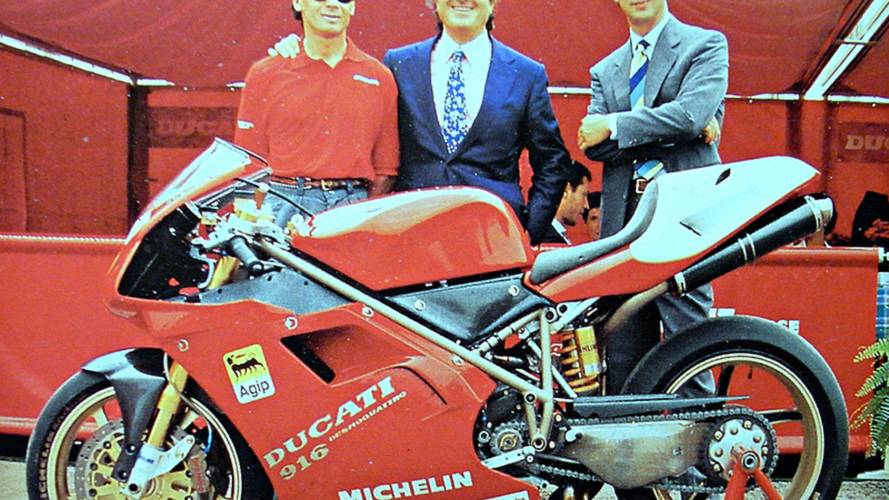 News of the recent death of Claudio Castiglioni has made the rounds in the motorcycle community, which has been quick to offer sympathy and heap praise on a man seen by some as a visionary. Certainly many of the fruits that came from the companies controlled by Castiglioni (pictured, center) became some of the most desirable motorcycles of the modern era, indeed of all time. But calls in various o...

News of the recent death of Claudio Castiglioni has made the rounds in the motorcycle community, which has been quick to offer sympathy and heap praise on a man seen by some as a visionary. Certainly many of the fruits that came from the companies controlled by Castiglioni (pictured, center) became some of the most desirable motorcycles of the modern era, indeed of all time. But calls in various online publications, including this one, that seem to hail the man at the helm of the Cagiva/MV empire as a kind of extraordinary genius are naive. I do not wish to demean the brilliance and passion that created the F4, Brutale, Monster or 916; in fact I love those motorcycles and personally aspire to own them all. I also don't wish to speak ill of a deceased man who is undoubtedly worthy of praise. But to blindly heap accolades regarding his business acumen or boast of his accomplishments in industry without also including some of the significant failures of the companies he led is shallow and disrespectful not only to his legacy, but to the hard work and hard times of those who worked for him.

It is true that he built up Cagiva into “Italy's largest producer of motorcycles” in the 1980s, but that was easily done in the years when Italy was a protected market where Japanese motorcycles were hit with massive, punitive import taxes and Piaggio pushed Gilera into the much more lucrative scooter market. Yamaha and Honda purchased factories in Italy at that time purely to level the playing field, a move that signaled renewed competition in the domestic market. Harmonization with the EU and the lowering of those barriers revealed how uncompetitive Cagiva and Ducati were on the open market. Rather than concentrating his assets on meeting this challenge, he wasted fortunes in Grand Prix racing resulting in the fire sale of Ducati to TPG and the frequent shut down of the Cagiva plant in Varese. The passion of racing is inspiring, but irresponsible to the workers assembling the motorcycles that keep the racing going, if they are the first to suffer.

The resurrection of MV Agusta, the so-called master stroke, was a business failure not once, but repeatedly. I will remind you that the original F4 took seven years to complete, not least because Massimo Tamburini ordered a complete redesign delaying the entire product launch in the search of perfection. In manufacturing, missing one season of sales potential is akin to burning cash in a blast furnace, you are still paying for overhead and R&D. Missing several is suicide. The result of these delays was that, by the time the F4 Serie Oro was released in late 1998, it boasted performance that could be bested by the plebeian Suzuki GSX-R 750, a motorcycle costing less than a quarter of the Oro's $40,000 price tag. I don't dispute for a minute that the F4 is incomparable to the Suzuki on many levels and that the idea of some plucky, passionate men pushing against the somewhat generic output of Japan is a compelling story. But we are talking about business and the leadership thereof.

The 2003 recession clobbered the firm, forcing Castiglioni to sell MV to Malaysian auto maker Proton for about $100M. Only the deal fell through less than a year later when due diligence revealed the extent of unpaid bills and half-finished motorcycles within. There were rumours of other large conglomerates expressing interest, such as Volkswagen, but still no deal materialized. In 2005, the company was taken over by GEVI SpA for a token 1 Euro, excluding debts. Three years later, they sold out to H-D for $109M, having sufficiently fluffed up the business with "new" models. which any engineer will tell you were nothing more than tarted up, bored and stroked versions of the dinosaur F4/Brutale mix, along with some limp cross-branding ideas linking MV with Hollywood (think Gone is 60 Seconds), the Italian National Soccer team and Louis Vuitton. In the middle 2000s, MV was the laughing stock of industry professionals, attracting dreamers and trade show visitors with pretty models in small dresses. Cagiva was closed down permanently, Husqvarna sold to BMW and most of the talent in the engineering department poached by Piaggio to head up Aprilia's brilliant entry into the MX/dual sport segment (SXV 4.5/5.5). The rest of MV's sordid tale with Harley-Davidson is well documented in HFL.

MV, Cagiva and the dramas surrounding the Casiglioni empire made motorcycling more interesting, and produced the most lust worthy machines of the modern age. But looking back, we should remain mindful of the cost of doing business in this way, both in lost capital and human suffering, particularly in light of Italy's recurring economic stagnation.

My sincerest condolences to the Castiglioni family. I remain hopeful that the new winds driving MV will result in a stable, successful business that continues to endow us with spectacular motorcycles.

For the record, also, here are the designers responsible for the motorcycles mentioned in the tribute.

The Cagiva Research Center (CRC) was run by Massimo Tamburini andm at one time employed Pierrre Terblanche, Adrian Morton (of Benelli Tornado fame), Miguel Galuzzi, and many other, less known, but equally important designers. Cagiva also had Crimson Design, a studio that covered Cagiva and Husqvarna brands, which was headed by Galuzzi at one time and employed Olivier Béboux (now design manager at GK Europe) and other very talented designers including my first boss at Piaggio, Peter Beselin.  CC was, in terms of design, involved as a business leader, but not in actual, practical design. I mention this because Italian corporate culture (in most sectors) has an unfair tradition of giving credit to putting all the laurels on the nominal head of a company, and not to the staff. Something I find insulting to the hard work of good designers everywhere.