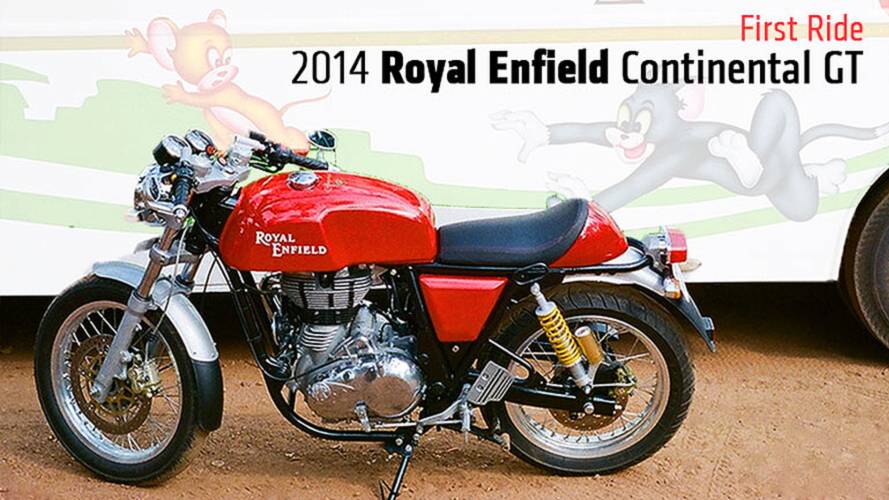 The 2014 Royal Enfield Continental GT is the lightest, fastest and most powerful bike the company has produced. Its also their first new bike in 50 years!

The first all-new design from the Indian brand in 50 years (you read that right), the 2014 Royal Enfield Continental GT is the most faithful recreation of the original café racer yet attempted. Can a classic bike work in the modern world? RideApart contributor and Mumbai resident Bjorn Schutrumpf took one to Goa to find out. - ED

The Continental GT is the lightest, fastest and most powerful bike Royal Enfield currently makes. It is also the first to use international-quality components: the double-loop steel frame was designed by England’s legendary Harris Performance, tires are Pirellis, brakes are by Brembo and the shocks are Paioli units, complete with remote reservoirs. Best of all, the design was penned by Xenophya.

It truly does look like it came from a different time, when bikes were simple and honest machines. The air-cooled, single-cylinder unit is equipped with a kick-starter in addition to the electric pushbutton start on the handlebar. Two simple gauges show speed and revs and the single-rider seat is basic and flat - without being uncomfortable. The wheels are spoked and covered by metal fenders, there’s a simple round headlight and absolutely no bodywork interferes with your view of the engine.

But that’s not a speed I felt comfortable testing on the Goan highways in India. Here, those are jointly shared between cars, trucks, TukTuks, motorcycles, scooters, cows, stray dogs and even boy racers using all of the above as chicanes.

In those conditions, the Continental GT was perfect. It’s diminutive size, easy going performance and accessible nature paired with the high quality components to deliver a great sense of control in a chaotic environment. The skid marks leading to a truck that pulled out in front of me can testify to that. I survived unscathed, but took it as a sign to explore the traffic-free back roads.

Through those rural corners, with only cows and stray dogs to dodge, the Continental GT comes into its own. The stiff frame is untroubled by potholes and bumps while the suspension is compliant and nearly plush. Steering is quick and responsive, allowing you to eat up corners while using the entire rev range.

This new motor has been set-up to make its top end more useable in comparison to the existing range of 500cc thumpers. That gives it a more willing nature, asking you to push it.

Riding at 60 to 65 mph on this bike is a real thrill. At speeds that wouldn’t get a modern performance bike out of first gear, you’re testing the limits of the Enfield’s narrow tires.

Fitted with clip-ons, albeit ones mounted above the top yoke, the riding position is a good compromise between comfort and control. A full day of riding will strain your wrists, but this is, after all, a café racer, one that’s entertaining and engaging to ride, so its worth it.

I haven’t yet had the chance to ride the bike through the gridlocked mayhem of Mumbai, but the lightweight, narrow bars and nimble nature should make the Continental GT a great commuter.

Royal Enfield has opened a new production line for the Continental GT. Foreign parts, design and quality control as well as modern assembly lines and processes have gone a long way toward creating build quality that is much better than expected. The aircraft-style filler cap is one such example, beautiful to look at and perfectly finished.

It delivers a much more authentic retro experience than any Bonneville will ever provide.

Despite that originality, the gear lever is on the left side! This deserves special mention, as the brand made that switch just 10 years ago.

The Five-Speed gearbox wasn’t shifting perfectly, trapping itself in neutral as I tried to shift up into 2nd. Not good while fleeing packs of feral dogs.

The bike could easily make 10 bhp more. Hey, at least tuning it will be easy.

The horn is overly loud. This is a problem when using it to say, “thank you,” “hello,” or signaling a direction change, as it is commonly done on Indian roads.

Well, it’s definitely going to be cheaper than that other Continental GT… This is the big question hanging over the bike’s U.S. release next year. At the likely $6,000 price point, you’re really going to have to want retro style to pull the trigger. The Honda 500 trio offers vastly more capable performance at the same price.

Royal Enfield hopes the Continental GT will help it expand sales outside of India. Whether it can do that depends on the market’s readiness to give up modern performance for something that doesn’t just look like its straight out of the 1950s, but rides like it too. They gained at least one customer though. I’m going to go ahead and buy one. I’ll let you know how it holds up to Mumbai’s monsoon season.