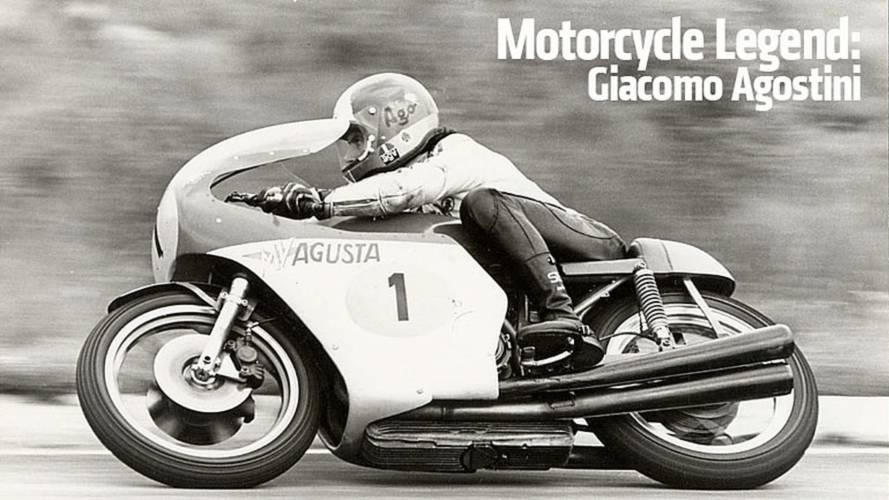 A profile of one of motorcycle racing's most prolific racers, we cover Giacomo Agostini’s World Championship Debut from 50 years ago.

Each week RideApart looks back to highlight key milestones in motorcycling history from innovations to significant model introductions to racing successes and, of course, some of the disastrous things we’d rather forget. This week it’s Italian racing legend Giacomo Agostini's World Championship debut.

It’s 50 years ago this year that arguably the world’s greatest Grand Prix motorcycle racer Giacomo Agostini took part in his debut World Championship race on a 250cc Moto Morini in Spain. He failed to score any points that first season but in the years that followed, Ago (as he’s known to his fans) went on to become the most successful rider of all time.

Over a 13-year career (from 1963-1977) this Italian rider won 122 Grand Prix in both the 350cc and 500cc categories (even today he is still ahead of Valentino Rossi) plus 15 World Championship motorcycle titles. Of those he won 68 races and eight titles in the top 500cc class with the remainder in the 350cc class.

Agostini began his career as a factory rider for Italian manufacturer Moto Morini and won the national 350cc title in his second year of racing in 1964. Agostini’s performance caught the attention of Count Domenico Agusta – then owner of the MV Agusta factory – who signed Agostini and Englishman Mike Hailwood for the 1965 350cc World Championship. It turned out to be a season-long battle between Agostini and Honda’s Brian Redman with the Italian just missing out on the title in the Japanese Grand Prix at Suzuka when his Agusta developed a mechanical problem.

The following season, in 1965, Hailwood left the Agusta team for Honda, leaving Agostini as the top rider for the Agusta factory and racing in both 500cc and 350cc World Championships.

It was that 1966 season where Agostini started to dominate motorcycle racing. He went on to win seven consecutive 500cc Grand Prix titles (1967-1972) and seven 350cc titles (1968-1974). In those years the Isle of Man featured as a round of both World Championships and Agostini won both classes of the TT 10 times. In 1972, he announced he would never race at the Isle of Man again as his close friend and fellow Italian rider Gilberto Parlotti had been killed that year and Agostini felt the circuit had become far too dangerous for Grand Prix racing.

In 1974, Agostini made the surprise move from Agusta to Yamaha winning the Daytona 200 in the 500cc class but was hampered by technical problems. He did though continue to win on a Yamaha in the 350cc category taking the world title that year.

For 1975 he won the 500cc Grand Prix title for Yamaha, which marked the first time ever that a two-stroke motorcycle won the top World Championship class. His penultimate season in 1976 saw Agostini riding both Yamaha and Agusta bikes in the 500cc championship (try doing that today) but with limited success. He retired at the end of the 1977 season finishing sixth in the 500cc World Championship standings as well as competing in 750cc endurance races for Yamaha.

After retiring he tried his hand at car racing running his own team and competing in a national Formula One Championship. Agostini returned to bike racing in 1982 running the Yamaha Grand Prix team and oversaw the careers of Eddie Lawson and Kenny Roberts. In the early 1990’s he even ran the Cagiva works motorcycle team. Agostini still works as an ambassador for Yamaha but no longer competes.

Today Giacomo Agostini’s astonishing record of 186 starts, 122 wins, 159 podiums, 9 pole positions and 117 fastest laps has yet to be beaten.