Meet the 'Scary' Bikers of BACA Who Stand Up For Kids 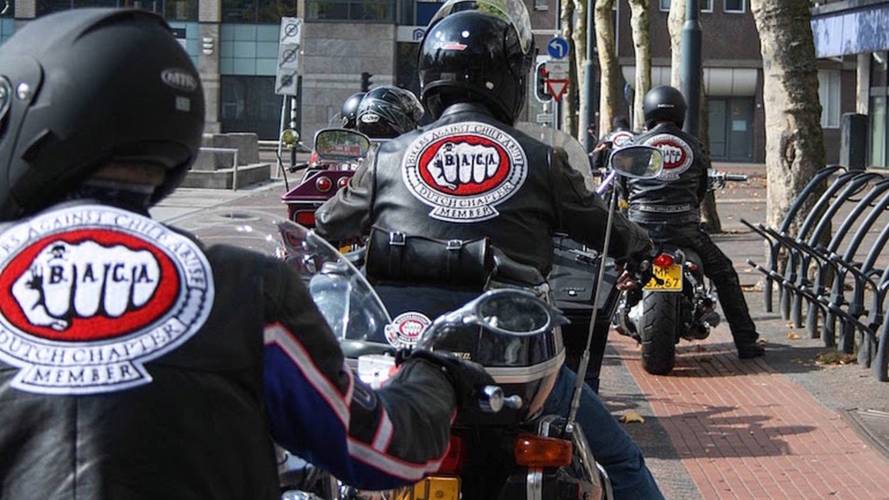 Meet the members of Bikers Against Child Abuse: a group of 'scary' that use their image to help protect kids.

Bikers Against Child Abuse: Meet the 'Scary' Bikers Who Stand Up For Kids

When most people hear the word "biker" it conjures images of Harley-riding, vest-wearing roughnecks with unkempt facial hair. Popular culture has long portrayed motorcyclists this way; Discovery Channel specials on 1 percenter clubs, "Sons of Anarchy," and countless other films and television programs over the decades have perpetuated this generalization.

But there are myriad bike organizations and riders who make an effort to positively impact their worlds through charity rides, fundraisers, and other good works. Among these noble two-wheel folk are some very special "scary" Harley guys who do happen to fit the stereotype – almost. Regardless of affiliation, these individuals come together in an effort to protect and enrich the lives of children in their communities.

Bikers Against Child Abuse (BACA) is a group that consists of motorcycle enthusiasts and club members (typically full patch-wearing members) who work to curb child abuse and protect its victims. Its mission statement says it "exists with the intent to create a safer environment for abused children.

"We exist as a body of bikers to empower children to not feel afraid of the world in which they live. We stand ready to lend support to our wounded friends by involving them with an established, united organization. We work in conjunction with local and state officials who are already in place to protect children. We desire to send a clear message to all involved with the abused child that this child is part of our organization, and that we are prepared to lend our physical and emotional support to them by affiliation, and our physical presence. We stand at the ready to shield these children from further abuse. We do not condone the use of violence or physical force in any manner, however, if circumstances arise such that we are the only obstacle preventing a child from further abuse, we stand ready to be that obstacle."

BACA started with current president John Paul "Chief" Lilly. Lilly is a registered recreational therapist and licensed clinical social worker, which means he is all too familiar with child abuse. Having heard about a particularly traumatized 8 year old, Lilly took the child under his wing and welcomed him into his circle of bikers. Lilly himself had come from a broken home but had positive experiences with older bikers when he was a kid.

Eventually Lilly's idea grew to include more young people and a ride was organized to raise awareness, and then another, and then another, until BACA was born. More and more people joined and BACA eventually was registered as a nonprofit organization and expanded to become a nationwide group with hundreds of members and dozens of chapters.

Members of BACA say they strategically fight against an opposition that operates behind close doors and out of sight the majority of the time. Their tactics in attempting to end child abuse require an immense amount of dedication, commitment, patience and time – not to mention the emotional toll that likely weighs on each member. The basis of their strategy is pretty straightforward. By working with local pre-existing and often state-run agencies, BACA is able to get connected to children who are in need of help.

Once a member has been assigned a child (or children) they will begin stopping by on a regular basis, not only in order to get to know the kids better, but to also get a firm understanding of the child's situation, and most importantly,to gain the child's trust – which can be an uphill battle. This is the key to the efficacy of BACA's strategy. If the child truly believes that they have someone they can call on to defend them, (or at the very least call to ensure whatever happened doesn't happen again) the cycle of abuse can be combatted. Gaining the faith and trust of a victimized child is difficult as a total stranger; add to this the fact these strangers happen to look scary to most adults, and you can get some sense of how kind and gentle BACA's members really are.

In addition to the regular visits there are BBQs, group rides, holiday gatherings, pizza parties and other events. This aspect of their method clearly focuses on allowing the kids to enjoy themselves and have fun while building a positive rapport with BACA members. With the negativity surrounding what necessitates BACA's effort, they place some importance on fun. And in their words, "letting the kids be kids."

Trust and an open line of communication between child and biker is crucial, as most abuse goes unreported. By empowering kids and convincing them they don't deserve harm BACA is often able to get them to start reporting incidents.

As part of its effort to end any new or ongoing abuse and to insure the prevention of any future abuse, BACA also injects itself into the legal proceedings. This is accomplished by a fleet of members escorting children to and from court in a parade-like convoy of bikers and kids (Two-up and sidecars obviously). These large groups not only include the member(s) assigned to the case, but also members who come out for a show of force. They then flood the courtroom and remain throughout the duration of the trial.

In many cases, for testimony to be applicable the child must testify in court about what happened to him or her. This is often a scary and traumatic experience for the child, having to do this in the presence of their abuser. BACA's hope is it's presence will take power and fear away from the abuser, making the child feel as comfortable and confident as possible.

BACA says its method has been proven to be effective. When asked about their current or previous involvement with "one percenter" clubs, no one from BACA confirms or denies anything, saying that the question is irrelevant to the group's focus. Fair enough. I will admit that I personally assumed the organization employed the use of strong-arm tactics and intimidation to achieve its goals. This really isn't accurate, though.

BACA makes it clear that it doesn't break or bend any laws, claiming to operate as a legitimate and 100-percent legal organization. But because so many of its early members came from a motorcycle club background, BACA does feel similar to MCs in some regards. To be a member one must have "regular access" to a working motorcycle capable of highway speeds limit. (Sorry, Vespa enthusiasts). Once fully accepted, one is referred to as a "full patch member." BACA members wear club vests, which they also provide to kids in their size. And as with MCs, there is a lot of symbolism and meaning found within BACA's logo, or "patch."

Arguably, one positive byproduct of BACA's efforts is the subtle dismantling of the "biker" stereotype. While members may look the part, their volunteer work not only helps children in need, but is a reminder to everyone else that people on two wheels are a lot more than a stereotype.

Even though everyone I've seen or come across who's associated with BACA rides a chopper or cruiser-style bike, BACA encourages every rider to join the effort. I spoke to several members and even though I made it clear that I'm only into sportbikes, I was still invited to attend a local chapter meeting. The commitment is serious and extremely time-consuming but I encourage everyone to check out the group. What these men and women are doing is genuinely important and has a profound impact on our world and the lives of children.

Find out more at www.bacaworld.org