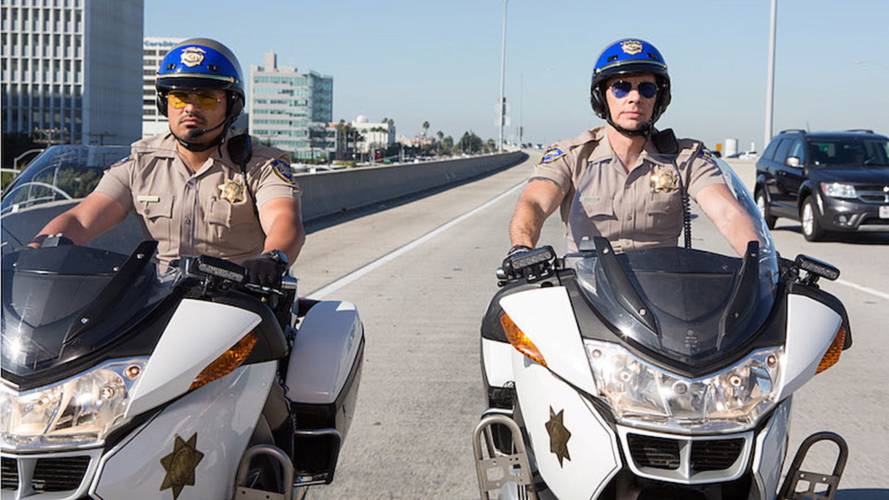 He doesn't just play a motorcyclist in the movies. CHiPs star Dax Shepard loves his motos and takes the time to tell us about it.

Dax Shepard is seriously passionate about motorcycles. When he recently spoke to RideApart about his upcoming action/comedy, motorcycle-focused buddy-cop movie CHiPs, it became increasingly clear it’s no coincidence that his latest film is centered around the two-wheeled machines he loves.

Over the course of my interview with the Detroit-born actor/writer/director/producer, he opened up on his thoughts about many moto-related topics, from his MotoGP fandom to his personal stable and some of his favorite Southern California twisties. Shepard says he prefers discussing motorcycles over his normal acting- and promotion-filled schedule. Which is probably why our interview ended up lasting longer than his handlers had planned.

RideApart: How long have you been riding and what’s your motorcycle background?

RA: I’ve read recently that you have a GSXR1000 and a Hypermotard, do you have anything else in your garage at the moment?

RA: What’s your favorite kind of riding to do these days?

DS: I think canyon and track are my favorite. Angeles Crest is one of the best rides in America, I think. And it’s, like, 10 minutes from my house. The backroad canyons that splinter off from (California SR 2, aka the Glendale freeway) are amazing. We’re five minutes away from Disneyland for motorcycles, and if you go during the week it’s like you can’t find a cop, even if you need one.

DS: I do. I’m obsessed with MotoGP, favorite hour of my week every other week when it’s on. I’m very public about my... love for Valentino Rossi, my 4-year-old daughter calls him my boyfriend. (laughs) What I love about Valentino is that he’s not ever the fastest (in qualifying) – well, unless it’s raining – but invariably you’re gonna have to duke it out with him and when it becomes a mental game, it’s, like, 100 percent he wins. If you start swapping paint with Valentino you’re gonna be in the infield pretty quickly. I find him to be the most exciting. The guy is like a bullfighter.

RA: Do you think he has a shot at another world championship?

DS: Oh yeah, especially if it’s a season with bad weather. That puts him in serious contention. I also think because I’m old I really like how the guy who’s 38 years old is still in the top three every week. Rarely is there a Michael Jordan of motorsports but that’s him.

RA: So, you wrote and directed CHiPs in addition to starring in it. Did you do this because you were able to involve motorcycles to this extent?

DS: Yeah. 100 percent. I start by looking for something that can hold both comedy and motorsports. This was a show that stars motorcycles, so I thought I could make a cool motorcycle movie out of this.

RA: Did you do any practicing or training for any of the stunts you performed in CHiPs? What did that look like?

DS: Noooo. All practice does is up your odds of getting hurt before you shoot. I'm more of a, "Let's just do it," kind of a guy. I did crash the big bike doing the front endo. I crashed twice before we got a usable take of me. Well, the front half that you see me and the back half is this guy who has the world record for the longest stoppie. I think he initiates his world record stoppie at like 130mph. Joe Brown. He's incredible.

RA: Your CHP training scene towards the beginning of the film, that was on a BMW right?

DS: Yeah that’s like a really old BMW, too. It’s not one of the newer ones. The cop bikes we had for the movie were particularly shitty because we knew we were gonna bust 'em, so we bought old, used ones. That is a piece-of-shit 2003 BMW, (laughs), with, like, 100,000 miles on it. There was nothing altered on it, shockingly. It would barely wheelie. You had to dump the clutch at 6,000 rpm to get it to pick up.

RA: Impressive. Did you write and choreograph the motorcycle sequences in the film or did you bring in a full stunt team or a coordinator?

DS: Almost every time on movies people do have second-unit directors for action (sequences) but: A, I wanted to do it and, B, we didn't have the budget for that. So, I directed all those scenes and mapped them all out. But I did have a stunt coordinator who was great. He's actually a good friend of mine I knew through riding motorcycles and found out he was actually a stunt man.

RA: Did you have any say in picking any of the gear you wore in the film such as the blue Dainese suits?

DS: Yeah, Dainese made those suits just for us. I went and met the guy who designs them and they were built in Italy for us so there was the full custom measurement treatment.

RA: Is it a coincidence that many of the chase scenes were shot on the East Side (of Los Angeles), near where you live?

DS: Well, they’re everywhere kinda. The big chase happens in Long Beach, but yeah, I do live on the East Side and especially for the L.A. River sequence I knew exactly where I wanted to shoot it when I wrote it: Elysian Park. I’ve ridden through there a million times and fantasized about riding up the those hills. There was only a single stunt where we didn’t use the actual bike and we digitally changed it. That was for that hundred-foot dune-to-dune jump. But other than that (we did) everything. But they (the stunt guys) jumped over the wall into the compound, they drove over cars, they went up and down staircases.

RA: What was Ducati’s official involvement in the production of CHiPs? In addition to the bikes featured in the movie, I noticed a handful of Ducati stickers and posters in the background of various scenes. Was there an official agreement of some kind?

DS: Well, no, actually. There was no kickback or advertising, it’s simply my favorite motorcycle. I knew I wanted to showcase supermoto stuff, some drifting stuff and track riding. There’s really only one bike currently that you can do all that on. It’s really only the Hypermotard that you can be barreling up staircases and jumping over walls and also for the riding up at Angeles Crest. There was a KTM that was great... but they got rid of it, so they were hard to find even if I wanted to use those.

RA: Were there any major accidents or injuries that involved motorcycles during the making of CHiPs?

DS: No, shockingly no one got hurt, 'cause there were a million motorcycle stunts. One guy got stitches on his chin because he hit the windshield when he crashed a BMW on that hill climb, but he got stitches and he was fine. No broken bones, no concussions. It was miraculous, really, when you consider how often we were doing (dangerous) motorcycle stuff. The coolest aspect for me was that the technology has gotten to a place where you can actually film motorcycles. You couldn’t have really made this movie five years ago, even. You know in MotoGP how they have that camera on the back (of the bikes) that self levels to the horizon? Well we had a rig we could mount on the front of a bike and I could be leaning in turns and it was keeping everything – when it wasn’t going haywire – level. We could also put it on another bike and film from behind, which hadn’t been done before. We have drones now, so you can do a tracking shot of the motorcycles going up a staircase, which you couldn’t have done in the past. Just all these different tools were at my disposal.

RA: What are your wife’s thoughts and feelings about your riding?

RA: Do you have any plans on getting your kids into riding?

DS: Ummmmm, I haven’t really even decided. I just taught my 4-year-old daughter how to ride a bicycle, which was more exciting to me than when she walked for the first time, I was like, "Oh God," and she was really good as soon as she got it. I raced BMX as a kid, so I think seeing her on a bike made me extra happy.”

RA: Thanks so much for taking time out to talk and answer some questions.

DS: Thanks, it’s always nice to take a break from acting to talk about motorsports for a bit. See you out on the Crest.

CHiPs is in theaters now