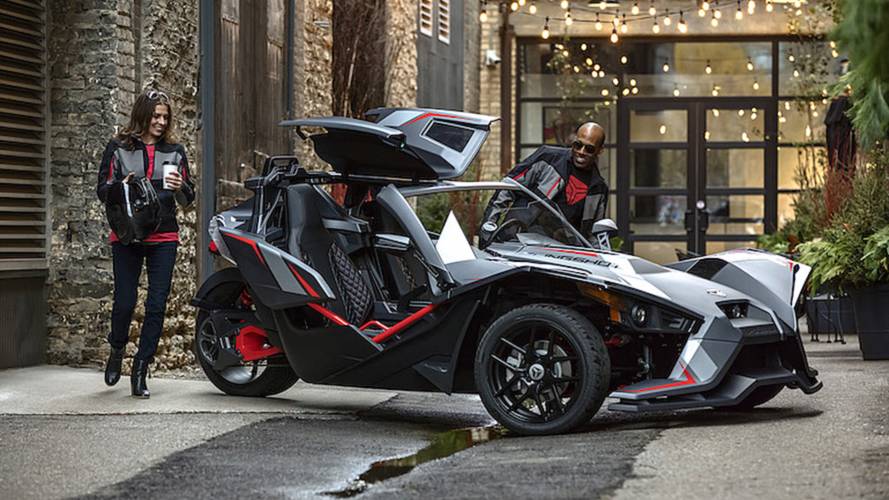 Now less like a motorcycle than ever before, but still pretty cool, this Slingshot is aimed at those wanting to 'ride' far.

With 'Slingshade' roof as standard, Slingshot is now more 'not a motorcycle' than ever

Polaris has announced a new accessory-laden Slingshot Grand Touring LE model, which it describes as "the ultimate in comfort, style, and technology."

THIS WAS OUR IDEA: Slingshot Touring: 1,500 Miles on Three Wheels

Perhaps inspired by former editor Jesse Kiser's road trip in a Slingshot late last year, Polaris fully outfitted the Grand Touring LE with "everything you need to make your escape," including a ridiculously named Slingshade roof, quilted seats, and the company's noteworthy Ride Command infotainment system (the same system is to be found on Indian's touring bikes and it is really handy). Available in Matte Butt Gray and Indy Red paint finish, it also comes with a limited-edition graphics package.

Polaris is launching the model in its hometown of Minneapolis on February 3, 2018. Something else really important happens in Minneapolis that weekend, as well, but we can't remember what it is... Anyway, a lot of people will be in town for that thing, including the folks partying at Maxim’s “Big Game Party,” which is where the new Slingshot will be displayed.

Although federally classified as a motorcycle, driving requirements for the Polaris Slingshot are directed by legislators at the state level. Under a new classification known as “autocycle,” Slingshot drivers in 41 states do not need a motorcycle endorsement to operate. Only a valid state driver’s license is necessary.

Starting at $29,999, the Grand Touring LE will be available at Polaris Slingshot dealers throughout the U.S. and Canada starting in early March.