Harley-Davidson has produced the Sportster for over six continuous decades. Despite the nameplate dating back to the Eisenhower administration, the Sportster canon only contains two periods: the Ironhead years and the Evo era. Since 1957, a pushrod-actuated, 45-degree V-Twin always thrummed at the model's core. Along with the vibey powerplant, a cradle frame, conservative styling, and spartan accommodations defined the platform. That all changes with the 2021 Sportster S, however.

For the first time in the model’s history, the brakes read Brembo, the gearbox touts six speeds, and the lighting is LED. Boasting a feature-rich electronic suite, the historically entry-level Hog gains premium status overnight. A daring new design encompasses the brand's acclaimed Revolution Max engine and aligns with the model’s performance ambitions. Of course, the 1,252cc, 60-degree V-twin doesn’t deliver the cruiser’s customary vibes. Instead, it delivers 121 horsepower. The Sportster may be a sexagenarian, but it's spryer than ever in 2021.

To prove the new model’s mettle, the Motor Company invited us to a day-long ride through the picturesque canyons of the Angeles National Forest and the man-made canyons of Downtown L.A. With such a dramatic makeover, questions naturally arose. Will the 2021 interpretation appeal to the customer base? Will it retain its David vs. Goliath attitude? Is it still a Sportster? Like all Harleys, the answers center around the V-twin mill.

Since 1986, the Sportster harnessed the MoCo’s Evolution engine. Long after the Big Twin class moved on to the brand’s Twin Cam V-twin, and subsequently, the Milwaukee-Eight, the Sportster continued championing the bulletproof Evo. Undersquare, air-cooled, and rumbly, the engine’s charisma overshadowed its crudeness. Instead of refining the platform over the years, H-D didn’t fix what wasn't broke.

Instead, it reinvented the model 35 long years later with the aptly named Revolution Max engine. Fresh off its debut in the Pan America, the liquid-cooled, DOHC, 1,252 V-twin earns a cruiser-appropriate retune in the Sportster S. The Revolution Max 1250T may concede 29 ponies to its adventurous cousin, but it's hard to notice the difference in the saddle.

Unlike the Pan America, which spools up to its powerband, the Sportster S is all teeth all the time. Well, in Sport mode, at least. As expected, Road is more mannerly and Rain is downright pleasant. Two additional custom ride modes allow users to adjust power delivery, traction control/ABS parameters, and engine braking settings to their liking. Whether you prefer a chill ride or a thrill ride, the Sportster switches identity with the tap of a button.

In Sport mode, performance reigns supreme. From the initial throttle crack, the torque piles on, peaking at 94 lb-ft at 6,000 rpm. The 1250T really shines in the mid-range, but power is accessible all the way up to the 9,500-rpm rev limit. On the other hand, the throttle-by-wire system exhibited an abrupt, on/off quality in Sport mode.

Snappy roll-ons frequently pushed me to the edge of the plank-like seat and the front end dove under quick throttle cuts. What Sport mode lacks in finesse, it makes up with enthusiasm, so I reserved it for highway and canyon duty. In the city, Road mode smoothed out the V-twin's power pulses without sacrificing too much raw acceleration. However, the Revolution Max and high-mount exhaust system threw off significant heat when confined to surface streets.

While the Sportster S does feature rear cylinder deactivation at a stop, the tracker-style pipes not only contribute to the engine heat, it traps it under the seat. Unsurprisingly, the rider's right leg receives the first heatwave, but the engine’s port side follows suit in short order. In motion, the warmth goes unnoticed, but from light to light, the heat forced me to rest my right foot on the peg at a stop. Otherwise, the exhaust was liable to broil my inner thigh to a medium-well shank.

Despite those drawbacks, the Revolution Max remains the star of the show. Of course, to optimize that star performance, Harley had to surround it with a complimentary cast of components.

Composed of three separate frame sections, the Sportster S chassis is like nothing in the company’s current cruiser lineup. The front, middle, and tail trellis frame units bolt directly to the 1250T engine, reducing weight while increasing rigidity. In turn, the handling improves markedly over the Evo era models, jumping from a 28-degree maximum lean angle to 34-degrees of lean. Tip-in and steering rate are predictable and stable.

Despite the 160/70 Dunlop GT503 tire wrapped around the 17-inch front wheel and the 180/70 rubber shod onto the 16-inch rear, the Sportster is surprisingly agile. Similarly, the 320mm single-disc front braking system seems lacking for a 121-horsepower machine, but the Brembo master cylinder delivers excellent bite along with nuanced feedback and feel. Needless to say, we would love to see how the Sportster S performs with slimmer tires and a dual-disc setup, but the stock equipment exceeds expectations.

The rear suspension suffers the same fate. With just 1.5-inches of travel, I anticipated the Showa monoshock to be one step removed from a hardtail. Thankfully, the linkage system helps the unit outperform the spec sheet, but the setup still has its limitation. The shock happily soaked up slow-speed bumps, but fast-bump compliance was another story. Several large hits bucked me out of the seat or sent a shock directly through my back.

Of course, the model’s aggressive, low stance may look sporty, but it also restricts the suspension travel. Again, we would love to see a taller monoshock on the sportiest of Sportsters, but the piggyback unit performed admirably considering its handicaps. Luckily, the fully adjustable USD fork isn’t hindered by the same issues.

The front end only boasts 3.6 inches of travel, but the appropriately damped fork never bottoms under hard braking or big bumps. In a corner, the Sportster S holds its line in a smooth and predictable manner. The Dunlop GT503 tires suit the model well, with enough feedback and grip to inspire confidence. Of course, dragging the single-piston rear caliper on the 260mm disc helps stabilize the 500-pound rig upon corner entry.

The Sportster S was in its natural element in the canyons. The model holds its own in the city, but it reveals its naughty side on a curvy road. The high-spec componentry and adjustability certainly contributed to that nature, but the rider posture also factors into the Sportster's performance.

At 29.6 inches, the S model’s seat height should fit a broad range of inseams. Despite the large exhaust heat shields pressing into the rider's right leg, flat-footing the Sportster is effortless. Reach to the bars is a slight stretch, with the rider’s upper half leaned forward and a small bend at the elbows. The forward controls position the legs at a 90-degree angle, but feet point slightly upward on the pegs.

While the forwards increase long-distance comfort, they also place more weight on the rider’s hindquarters and off the pegs. As a result, I preferred the mid control-equipped Sportster S despite the acute leg bend. The sense of control provided by the mids would make it an instant upgrade for me. Unfortunately, the Motor Company doesn’t offer an option for mid control, but customers can purchase a conversion kit for $660.

The Sportster doesn’t perform poorly with the forwards, as both setups yield a 34-degree lean angle, but the mids allow the model to reach its full performance potential. Not to mention, after several hours with forward controls, my rear end started to ache due to so much of my weight bearing down on the thinly padded seat.

Harley also outfits the forwards with an extended shift lever (compared to the mid controls). The lever’s long throw resulted in numerous unintentional shifts into neutral when kicking from first to second gear. I didn’t encounter the same problem once on the mid controls. I should note that the mids may prove too cramped for taller riders. At five-foot, 10-inches, I fit comfortably into the new rider triangle but the user’s purposes and preference will determine what’s best for them.

Last but certainly not least, the all-new round, four-inch TFT display is a first for the Sportster family. While the switchgear gains a host of new buttons and switches, the interface is intuitive and easy to navigate. From ambient temperature to engine temperature, from tire pressure to battery voltage, the rider can check every metric impacting the bike’s performance.

Bluetooth connectivity unlocks navigation, incoming call identification, and music-playing features. However, the Sportster S doesn’t include a GPS receiver, so the system relies on the rider’s smartphone network for those services. Also, without speakers included, the user will need to link their helmet communication system to the motorcycle.

The breadth and technology of the new infotainment system may be a giant leap forward, but the limited screen real estate can be restricting in navigation and diagnostic modes. With so much information crammed in such a small area, fonts quickly become illegible, especially at speed. For that reason, I stuck with the standard setup, pairing a large mph readout, needle-style tachometer, gear position indicator, and trip meters. 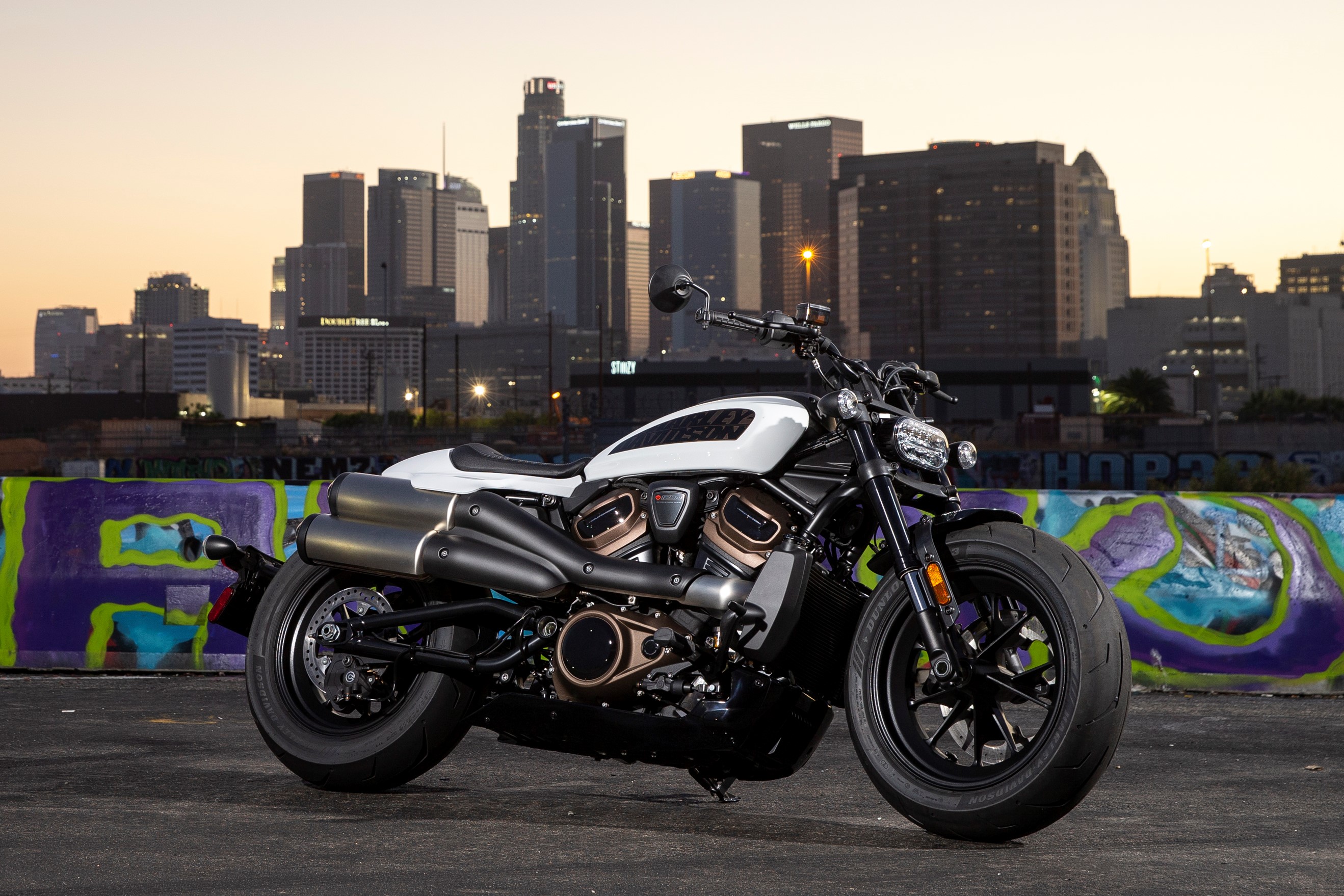 The 2021 Sportster S marks a watershed moment for Harley's longest-running production model. From side valves to overhead valves to four valves per cylinder, the Sportster has come a long way, but its latest form is a major departure from the previous iterations. The Sportster S should appeal to existing, performance-oriented Harley customers but also draw new blood into the brand.

At 500 pounds and 121 horsepower, the historically entry-level model is lighter and more powerful than any other cruiser in the Motor Company’s portfolio, making it more of a giant killer than ever. By Sportster standards, the 2021 S model is a marvel, warts and all. While the Sportster S is a seminal entry in the Harley history books, the potential it presents is even more intriguing.

We can’t wait to see what the Bar and Shield does with the platform as it fills the slots under the flagship trim. No, this isn’t your grandad’s Sportster, it’s something entirely new, and Harley-Davidson is poised to build on the model’s possibilities for the next 64 years.

Harley-Davidson Reports Global Bike Sales Up 24 Percent In 2021 Q2
By: Dustin Wheelen
++
++
Got a tip for us? Email: tips@rideapart.com