For the past year, the COVID-19 pandemic has made one piece of clothing optional: pants. Running to the store? Shorts will do. Jumping on a Zoom call? Sweats it is. As vaccines roll out, businesses reopen, and people go back to the office, pants are en vogue once again. However, throughout the shutdowns, there’s one activity that always encouraged full coverage—motorcycling.

I'll shamelessly admit that riding jeans are the only jeans I’ve donned in the past 15 months. If I’m going to wear pants (by choice) without the pressure of social convention, they’re going to protect my backside in a slide. Needless to say, countless hours in the saddle forged a pair of trousers unique to my body. I started wearing them off the bike as well. They were that comfortable.

So, when I got my hands on Pando Moto’s Robby Arm 01 riding jeans, the moment was bittersweet. I needed a second option in my rotation, but I had grown attached to my quarantine security blanket. Luckily, the Robby Arm 01 put me at ease with equal parts comfort and protection.

Pando Moto’s website touts the Robby’s Armalith construction. In fact, the jean takes half of its name from the abrasion-resistant material. Frequently used in military and space apparel, Armalith is comprised of cotton fiber and ultra-high molecular weight polyethylene (UHMWPE) fibers. Yes, it’s a mouthful, but the fabric lives up to that lengthy title, resisting tearing, snagging, and abrasion at a higher rate than leather.

The single-layer Armalith found in the Robby Arm 01 qualifies for a CE level AA rating, which protects up to 35 meters (115 feet) or a four-second slide. Pando Moto reinforces the material’s pedigree by claiming that its 15 times stronger than steel. With such a focus on the protective properties, I assumed the Robby Arm would be stiff and unyielding. I couldn’t have been more wrong.

To my surprise, the 13-ounce denim is one of the softest pair of riding jeans (or any jeans) I’ve ever tried on. The material is supple and nothing like the selvedge-style denim I envisioned after reading the product description. I personally enjoy breaking in a new pair of jeans, but the process can include months of uncomfortable riding. Right out of the box, the Robby’s super-stretch denim was pliant and soft to the touch, which typically requires months or years of washing with selvedge denim.

To match the tactile condition, Pando Moto distressed the Robby Arm with creases at the lap. An overall fade applied to the black denim also adds to the aged styling. The result is a jean that looks and feels like a well-worn pair of Wranglers or Levis. It’s a little bit country, a little bit rock and roll. That quality holds true in the saddle or off the bike, but the same can’t be said for the included knee and hip armor.

The CE-approved Sas-Tec protectors provided with the Robby Arm 01 easily contour to the rider’s body, but that flexibility is also the armor’s worst attribute. Without rigid denim to keep the knee protectors in place while standing, the sheets of armor frequently flip into a convex shape instead of retaining a concave form. While seated, the knee armor can also fold at sharp angles, creating an unflattering look.

For €339.00 ($411 USD), I would have liked to have seen a more robust set of knee armor. Pando Moto does sell additional protectors, though, so customers can upgrade if they find the provided protection insufficient. Other than the floppy knee pads, the Robby Arm 01 are inconspicuous riding jeans. You can wear them to a café, restaurant, or even the park, and seldom a soul would notice. They would do just fine in the modern workplace as well, but those with more formal dress codes can slot them in for the weekend road trips.

Unlike the knee protectors, the hip armor stayed put when the jeans were in use. On the hanger, however, the flexible sheets slumped into the Velcro-less pockets. It only resulted in a minor inconvenience when fitting back into the jeans, but it's worth mentioning nonetheless. Despite the minor fitment issues, the knee and hip arm, most importantly, stayed in place while on the bike.

The thin protectors generally go unnoticed during stints in the saddle and adjust to the rider's movements without pinching, creasing, or folding. The Robby Arm 01 imitates non-riding jeans with no exterior stitching to reveal its armor pockets, but a reflective strip along the bottom of the outseam provides a motorcycle-specific benefit.

Though the riding jeans possess no other visibility-enhancing features, the small reflective strip is only exposed when the user cuffs the pant legs. That, in turn, exposes the rider’s ankle and lower calf, sacrificing coverage for a modicum of additional visibility. For that reason, I eventually kept the Robby Arm 01 at full length when on and off the bike.

No matter what length, the Armalith material is known for its heat-reflecting properties. That may be the case in the lab, but on a bike like the Ducati Monster, there’s no hiding from the engine heat. Unfortunately, I wasn’t able to compare the Robby Arm to non-Armalith jeans, but the difference seemed negligible. I would have preferred a vent along the inseam/outseam, similar to the brand’s Mark Kev 01 riding pants, to whisk away engine heat.

However, that would also sacrifice the low-key aesthetic championed by the Robby Arm 01. With that said, the heat was more noticeable than uncomfortable. I would happily include the Robby Arm 01 in my fall, winter, and spring rotation. In summer, I’d go for something with increased airflow.

Pando Moto’s Robby Arm 01 is a stylish yet comfortable, protective yet discreet pair of riding jeans. Fortunately, I wasn’t able to test the Armalith fabric’s abrasion resistance first hand, but there’s no replacing the confidence that such a material provides. The aged wash adds a little edge to the riding wardrobe and features such as hip armor, knee protectors, and reflective visibility strips add to the jean’s practicality.

Of course, I plan to replace the knee pads with more robust and rigid units, but the CE level AA rating is more than enough slide protection for the streets. Yes, with more businesses opening and social events returning, we will have to go back to the tyranny of pants. Luckily, if you’re going to wear any pants, the Robby Arm 01 has you covered on and off the bike. 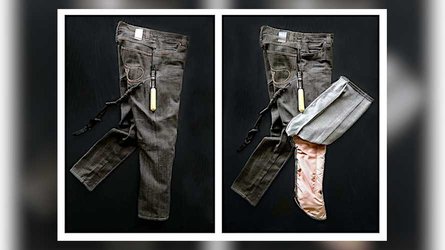 Airbag Jeans For Motorcycle Riders Under Development In Sweden 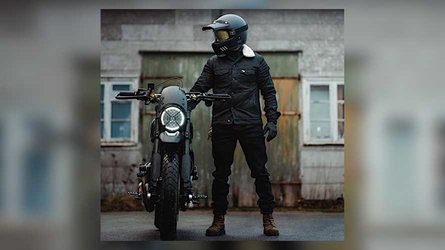 Australian Gear Maker SA1NT Brings Its Moto Jeans Back To America
By: Dustin Wheelen
++
++
Got a tip for us? Email: tips@rideapart.com