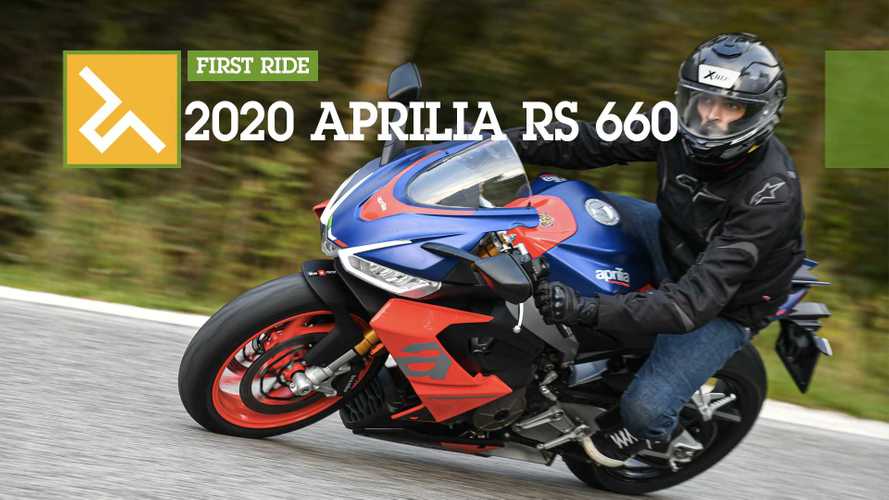 The new sportbike from the House of Noale is finally here.

This all seems like a vague memory now in 2020, but Aprilia just stepped up to remind us of those glory days The RS 660 revives the whole street-friendly sportbike concept, stuffed to the brim with technologies, and reaping the benefits of the House of Noale’s continuously evolving know-how. The result? A motorcycle that we haven’t seen in a long time.

The RS 660 is exactly the type of sportbike you expect from Aprilia. With its compact format, dynamic lines, and sophisticated features, you really get to enjoy the bike thanks, among other things, to its its quintessential sportbike ergonomics that aren't overly exaggerated.

Its most distinctive feature is the fairing that plays on Aprilia’s signature design. The daytime running lights underline the headlights, and openings on the nose act as aerodynamic appendages. If in this case, Aprilia didn't opt for winglets like it did on the RSV4, this innovative design helps increase the bike’s stability. At the back, the design ends on a three-LED pod taillight cluster.

The bike comes in a choice of liveries inspired by some of Aprilia’s most iconic models. In addition to the Apex Black colorway reminiscent of the firm’s racing team colors, the model also comes in Lava Red—inspired by the RS 250 Reggiani Replica—and a color called Acid Gold which is inspired by the AF1 Futura’s sulphuric yellow paint.

The 660’s family resemblance to Aprilia’s flagship bikes goes far beyond its looks. At its core, the RS 660 is powered by a parallel-twin derived from the V4 found inside the Tuono and RSV4. Though mathematics is a science of precision, it's often limited by engineering which means that instead of 550cc (half of the 1100cc V4), the displacement was increased to 660cc to meet the Euro 5 emissions standards.

The liquid-cooled parallel-twin features four valves per cylinder, a 270-degree dual over-head cam, and uses a combustion chamber, pipe, cylinder, and piston design inspired by the V4. The 81-mm bore and 13.5:1 compression ratio are almost identical to the 1100s’.

Aprilia’s main objective with the model was to respect certain dimensions and weight figures, which it achieved using innovative solutions including the use of offset cylinders integrated into the crankcase to reduce the block’s internal friction and exterior dimensions.

The mechanical and electronic components work hand in hand as this model also features a six-axis Inertial Measurement Unit (IMU) and the Aprilia Performance Riding Control system. The electronics include eight levels of traction control, switchable anti-wheelie control, cruise control, cornering ABS, and engine braking control. The six-speed transmission with up-and-down Quickshifter relies on an assist and slipper clutch and a ride-by-wire throttle teamed with five riding modes, three for the road and two for the track.

Chassis are one of Aprilia’s strengths and for the RS 660, the engineers have come up with a cast aluminum frame and swingarm. The former is built from two lateral beams attached at the head and at the back and uses the engine as a stressed member. The latter is a monoblock unit attached directly to the engine that takes advantage of the Kayaba monoshock’ position on the frame to obtain optimal support even without any leverage. At the front, the bike sports a KY adjustable 41mm inverted fork.

The 17-inch wheels are wrapped in Pirelli Diablo Rosso tires and feature a pair of 320mm discs with Brembo four-piston calipers at the front and a 220 mm disc with Brembo caliper at the rear. Weight-reduction measures were adopted at every level which shows in the numbers: the frame weighs 18 pounds; the sub-frame, 4.36 pounds, while the wheels weigh in at 7.9- and 12.78-pounds front and back which results in a dry weight of 372 pounds.

The bad weather put a damper on our ride, and the 125 miles of twists and turns we were looking forward to turned into a brief trip to a closer mountain pass in the Venetian Alps. Despite the shorter mileage, it wasn’t long before I discovered just how cozy the RS 660 is for a sportbike equipped with clip-ons. The arms and legs don’t get tired and the 32.3-inch saddle is narrow where you need it to be which ensures a good weight distribution, even if you are shorter than 6 ft. Only riders taller than 6’2” might find the ride a little cramped, but this is a sportbike after all.

These are some of the model’s compromises if that’s what you want to call them. They don’t make the bike less sporty and I think they even serve to make it more enjoyable.

The riding position allows less experienced riders to fully enjoy themselves, even in more dynamic situations. The weight is definitely shifted forward but not to the extreme. The padded saddle is comfortable even if it proves a little slippery during the braking leading up to a bend. The subframe is narrower by half an inch compared to the RSV4’s and provides immediate feedback.

The engine is smooth throughout the power curve without being too sharp in the low-end—it’s actually very flexible even at low revolutions. In the mid-range, the engine is steady and provides sufficient pull without immediately spiking towards the redline.

Beyond the 7,000rpm mark, however, the claws are out and the motorcycle lunges forward, sending the rpm waltzing up to the 11,500 line. You shouldn’t rely too much on the specifications to get an idea of what the motorcycle is capable of. For instance, the torque figure isn’t anything spectacular but the delivery is astute. You also get to take full advantage of the motorcycle’s power, to the point where you could be fooled into believing it produces more horsepower than it actually does, especially if you use the perkier riding modes (Dynamic and Custom).

The Quickshifter works well, though it feels a little choppy, especially on the upshift, while the rest of the electronic systems quietly go about their business. You must work very hard indeed to foil the RS 660’s electronics. Another one of the bike’s strengths, and it won’t come as a surprise, is the chassis that transforms the bike into one of the most intuitive, efficient, and possibly svelte models in the bends. It folds with ease, remains precise even when I up the tempo, and reacts with an efficiency that stuns.

It forgives and forgets even the most daring behaviors that not even my colleagues with track experience would attempt. You won’t have to beg to go fast and though the mph might increase, the RS’s behavior remains unchanged. Steering isn’t exactly lightning fast and prefers a more predictable behavior but it compensates with a solid entry and delightful course through the curve.

Aside from the Pirelli Diablo Rosso soles, the suspension deserves a special mention. Though it doesn’t quite manage to filter out all the bumps on the gnarliest surfaces, it provides great feedback and weight transfers operate seamlessly. The choice of Brembo hardware is a bonus and on the RS 660, the braking deserves all the praise.