The conversion for Harleys and Goldwings provides the two-wheel riding experience with three-wheel stability.

A few years ago we took a first look at a prototype of unique kit by Tilting Motor Works. It turns a Honda Goldwing or Harley-Davidson into a three-wheeler that still leans into the turns like a two-wheeler, sort of like a Yamaha Niken. Since our first report, the TMW kit has gone into full production, and I managed to get a ride on a TMW-equipped Harley Road King for myself.

THREE WHEELS ARE DIFFERENT THAN TWO 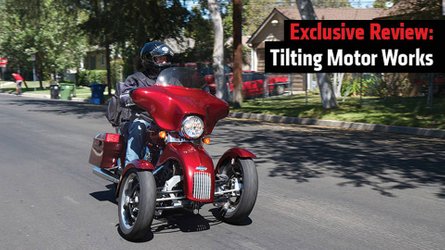 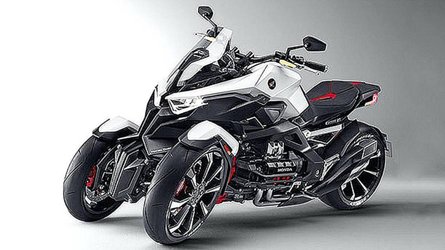 Perhaps the most striking feature of the TMW kit, besides the two wheels in front, is the cowling that replaces the front fender. It isn't necessary, strictly speaking, but it looks good and covers the steering linkage. It also includes what looks like a front grill from an old hot rod. This old-school look would seem a little out of place on a modern looking Goldwing, but I think it works quite well for a Harley, which is already all about classic cruiser styling.

Under that skin lies a thoroughly modern double wishbone suspension with coil-over springs and shock absorbers. This is a suspension straight out of a sports car and well known for its excellent handling characteristics. In addition to the steering linkage itself, the conversion includes shocks, wheels, tires, fenders, brakes, the front fairing, and all mounting hardware. This is a fairly complex conversion, not a do-it-yourself deal. TMW will install it for you or have one of their authorized dealers do it. Any stock parts removed in the conversion, such as the front fork and wheel, will be returned to you.

At the dealer's suggestion, I took a few slow, easy laps around the parking lot before taking the Road King out on the street. It took some getting used to, particularly at low speeds where I could feel the extra weight and complexity of the system. The bike still functioned the same way as a stock Harley, though. Unlike a typical Harley trike or a Can-Am Spider, my trained instinct to countersteer still worked perfectly with the TMW conversion. With two wheels in front the bike feels wider, but in reality, it's still no wider than the handlebars and luggage. After more practice, I started slaloming parking lot islands and was able to place the front wheels exactly where I wanted them, right at the edge of the curb without running it over.

On the road, the higher speeds make the steering feel lighter, almost as light as the original single-wheel steering. There is still room to choose the left or right groove of the lane. Braking is much more precise and more powerful than the original system. Harley's original front brakes are perfectly good, but having two brakes, wheels, and contact patches enable more control than a single wheel can possibly provide.

The TMW conversion is amazing over bumps. The spring rates and damping work perfectly to soak up the many imperfections of New Hampshire's roadways. Even better, each wheel's suspension is independent, allowing one side to bounce over a bump while the other side rolls around it without upsetting the handling at all. It's probably the best motorcycle front suspension I've ever experienced.

This particular bike did not have TMW's TiltLock system, which automatically brings the bike back to vertical when stopped or at speeds below three miles per hour. I still had to put a foot down when stopped, and I still had to use the kickstand when I parked. I had no problem with this. In fact, it was part of what makes the TMW Road King feel like a regular two-wheeler. I can also see how TiltLock could enable riders who might have trouble holding up a heavy Harley or Goldwing to keep on riding their big bikes with a little assistance.

The Tilting Motor Works conversion is not cheap. The basic kit costs $9,999, and TiltLock adds another $3,000 to the price. I can see the appeal of this conversion. Riders with limited leg mobility can continue to ride with the full tilting experience you expect from a motorcycle. Some riders may simply feel safer riding with the extra wheel. I'd certainly prefer this to a traditional Harley trike or Can-Am Spider that doesn't tilt.