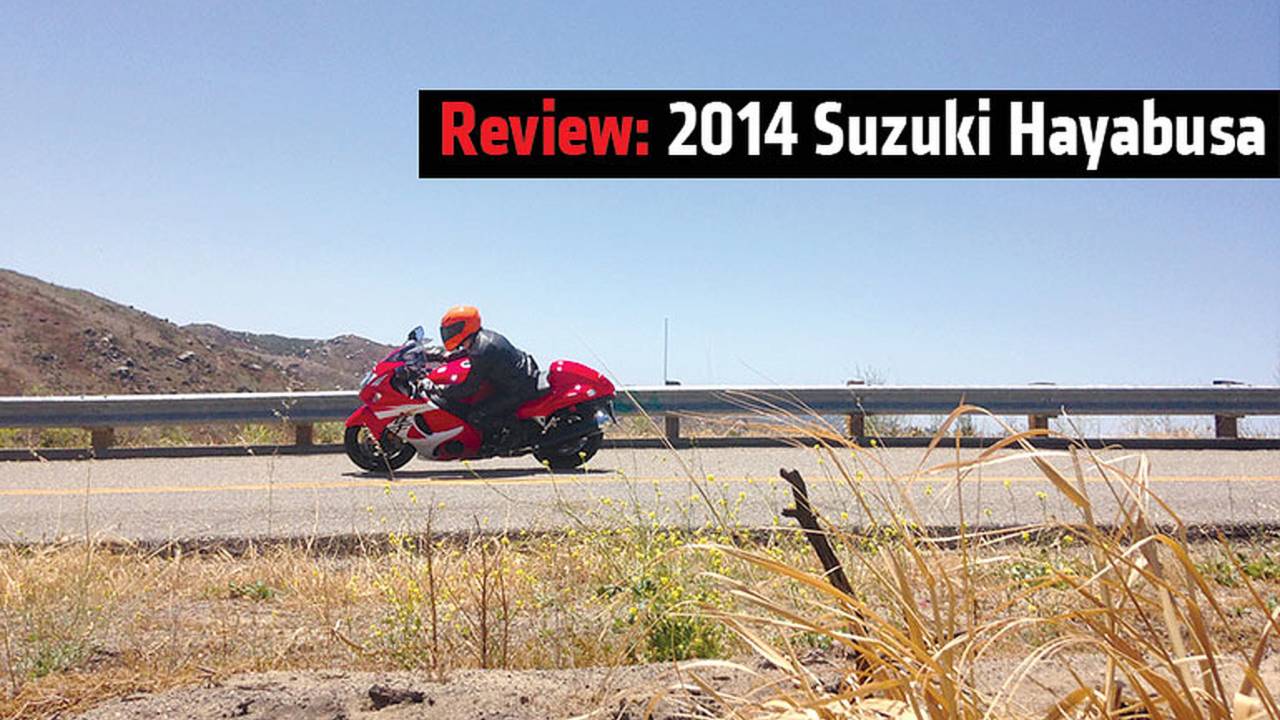 The 2014 Suzuki Hayabusa is a big bore speed machine that provides comfort and some surprising agility considering its length and weight.

Big-bore power is something that seems to never want to die. That's alright by us, considering sometimes we are simply looking for one piece of straight road to let loose on.

With its big 1340cc four-cylinder engine, freakish acceleration and swollen, randomly bulging body work, the 2014 Suzuki Hayabusa is excess personified. In a classic case of vehicular one-upmanship the Hayabusa debuted in 1999 specifically to unseat the Honda CBR1100XX Super Blackbird as the fastest production motorcycle of the time. From those ballsy beginnings the big Suzuki has carried on as a prime choice for those who prize speed above all else…even if the modern iteration is artificially limited to a mere 186 mph.

When describing the Hayabusa, be prepared to use all sorts of synonyms for “fast” and “big”. That bigness is expressed through a sizable 86.2-inch total length and a hefty 586-pound curb weight. Riders coming from smaller bikes might find all that mass intimidating and not without reason. Like any big motorcycle, lean it a bit too much during foot-down maneuvering and even the most committed Crossfitter will struggle to keep the bike upright. In motion though, the Hayabusa is the real deal, delivering all the acceleration and high-speed lunacy promised by its garish looks and long, low stance.

Not much has changed for 2014 aside from a new color palette. The familiar 1340cc engine soldiers on producing an unspecified but clearly ample horsepower figure. Power delivery is rider controllable via a 3-mode selector located next to the throttle called S-DMS (Suzuki Drive Mode Selector). Fire up the engine and the bike automatically defaults to mode A, delivering maximum power and the sharpest throttle response. B and C modes are also available offer progressively less power and softer throttle’s reactions. Along with peace in the Middle East I quietly wish for a mode that dishes up smoother power delivery than the touchy Mode A along unbridled horsepower. Call me a dreamer.

Braking is handled by radial-mount Brembo Monobloc front calipers clamping 12.2-inch discs that offer great feel and substantial stopping power. The added assurance of a standard anti-lock braking system is a welcome bonus. Unlike its prime competitor, the Kawasaki ZX-14R, the Hayabusa doesn’t offer electronic traction control. Keep that in mind when blasting away from bike night at the local watering hole. You don’t want to wind up a viral crash sensation on YouTube do you?

Climb aboard for the first time and you’re met with an uncluttered, intuitive cockpit. Everything functions exactly as you’d expect making the Suzuki Hayabusa an easy motorcycle to simply hop on and ride…mass related concerns aside. There’s also a nice tactile feel to the switchgear. The turn signal operates with a delicate yet unambiguous feel, while the flash-to-pass high-beam switch is well-placed and operates with a satisfying click. All of this might seem trivial when hurtling along at triple-digit speeds but over time it’s the details that annoy or satisfy.

With manageable clutch efforts and a stable idle pulling away from a stop is easy and uneventful but once in motion it is difficult to roll the throttle on or off without abrupt reactions from the powertrain. That touchiness is most pronounced with the Suzuki Drive Mode Selector in default mode A. Even in the most forgiving mode C smooth power application can still be tricky. That said, riders drawn to the Hayabusa probably aren’t looking for nuance. So forget about it; go ahead, twist the grip and feel the G’s.

Raw, untamed acceleration is the point of a bike like this. When unleashed there really isn’t anything quite like the gut punch of speed waiting to be unleashed by Suzuki’s two-wheeled rocket ship. Even in sixth-gear the Hayabusa will pull with respectable urgency but pop down a gear or two prior to throttle-up and you can unleash pure hell. It’s intoxicating. It’s also an easy gateway to a reckless driving arrest. With so much speed on tap the large, mostly buzz-free mirrors really come in handy. When you absolutely need to know if that’s a Crown Vic trailing you it’s nice to get a definitive answer.

When not tempting the fates you might notice a minor buzz through the bars from about 4,500 to 5,000 rpm. No problem. An overabundance of torque means you can just short-shift and lope along at low revs, like you’re driving a Chevy. Another possible annoyance is the riding position, thanks to ergonomics pulled squarely from the sportbike playbook. The result is plenty of weight on your wrists and legs that may feel cramped depending on your height. Ride like this for more than an hour and things can get uncomfortable. If you just want a fast bike to cruise on the Hayabusa’s riding position may be a game killer. With stock settings the suspension is also pretty stiff carrying my 155 pound frame. I’d consider softening the dampers if daily commuting was on my to-do list.

As mentioned previously, the Suzuki Hayabusa is a hefty motorcycle and that weight has implications when it comes to handling. This is not a flick it into the corners kind of bike. Getting the big Busa to lean takes more effort than lighter, more nimble sport bikes. So be prepared to work those arms. On the flipside, the large and long design affords the rider a sense of cornering stability that dartier sportbikes lack. I wouldn’t classify it as “agile” but with a bit of muscle the Hayabusa is certainly a capable canyon carver.

The Suzuki Hayabusa rings in at $14,599 with your choice of metallic gray/black or red/white paint schemes. A 50th anniversary model is also offered for $15,199, sporting limited edition black and red paint. Buyers tempted to make their bikes even more distinct can spring for a variety of Suzuki brand accessories.

When it comes to competition the $15,299 Kawasaki ZX-14R is an obvious contender but, given the Hayabusa’s standard ABS, the $15,699 ZX-14R ABS would be a more appropriate comparison. That makes the Busa something of a bargain. The Hayabusa also occupies roughly the same price range as mainstream Japanese 1,000cc sportbikes like the Yamaha YZF-R1, Honda CBR1000RR and Kawasaki Ninja ZX-10R.

Where exactly is one meant to use a bike like the Suzuki Hayabusa? Sure you can ride it work, Arby’s, Harbor Freight or anywhere else accessible by paved roads but to exploit its potential you’ll need a drag strip, a salt flat or some magical land filled with long straight roads and an utterly incompetent police force. Florida comes to mind. Riding Suzuki’s 1,300 cc land-missile on public roads is like placing Neil Peart in a library. Even so, a daring minority of humanity actually believes that too much power is never enough. Fair enough. If power is your vice, the Suzuki Hayabusa makes one hell of a pusherman.