Last summer I rode a BMW F800GS across Labrador and, after completing half the journey with a broken frame (oops), said I couldn’t think of a bike I’d have rather made the trip on. Well, now I can. That’s because I’ve ridden the Triumph Tiger 800 XC. It might be shockingly similar in photos and almost identical on paper, but riding it reveals something else entirely. This thing is amazing.

This was my single biggest issue with the BMW. It’s seat initially feels cushy, but that only lasts about 20 miles. I literally rode all the way to, from and across Labrador standing up; it made my ass hurt that badly. In two days, I’ve put about 250 miles on the Tiger and it’s never been anything but super comfy. The screen looks short, but even at 100mph I can have my Vanson AR2 zipped down without it billowing up and my AGV AX-8 doesn’t get buffeted at all.

One of the nicest things about it is how easily adjustable those ergonomics are. Two little bars live under the rider’s seat, held on by bungees. Spend 5 seconds swapping them to the lower position and the seat gets about an inch or so higher. Loosen two hex bolts on the bar clamp and the bars rotate nice and upright. One hex key on each side is all that’s required to reposition the levers, bark busters and mirrors. It took literally 60 seconds to do all that. On the GS, I had to adjust everything separately, using BMW’s seriously annoying Torx bolts. That was, of course, after I’d waited a week for a set of Torx keys to arrive from Amazon, the GS’s toolkit is incapable of performing any actual work.

Haven’t tried it yet, but I bet it’s going to be great with a passenger too. The preload on the rear shock (the only suspension adjustment available) has a remote adjuster that you only need a flat head or a bit for. Either will work, which is clever. The seat itself is long, narrow and flat. Perfect. As are the grab handles, which are literally the most perfect I’ve ever seen on any motorcycle. Sure, they’re ugly, but they’re huge and stick out very far; you could wear a baseball mitt and still grab on.

I say deceptive because there’s not so much a powerband as there is just torque everywhere. You don’t ever feel any sort of kick or rush, you just look down and realize you’re going 50mph faster than you thought you were.

Sean was initially pretty disappointed at the power, but he’s used to the peaky rush of a GSX-R600. On the Tiger, you just whack the throttle open in any gear, at any speed and it seemlessy, smoothly accelerates. There’s no drama, but the whine of the triple still brings plenty of character.

In addition to comfort, this is really where you start to say “fuck the GS.” Where that handles like a nearly 500lbs adventure tourer on soft, unadjustable suspension, the Tiger is sharp, urgent and confidence inspiring. That’s with a 21” front wheel. The chicken strips were totally gone after the first on ramp and I’ve been railing this thing through traffic in a manner totally belying the fact that it is a nearly 500lbs adventure tourer with unadjustable suspension.

The Bridgestone Battlewings help here too. They’re much better on the road than the Pirelli Scorpion Trails that come on the GS. They don’t seem to need any warm up time at all and deliver tons more feel than a bike wearing a 21” front has any right too. I’m more confident on the this than on the D204-shod R1 that’s been parked in the garage since I picked up the Tiger.

I’m thinking I might be able to get my knee down on it and plan on finding out. 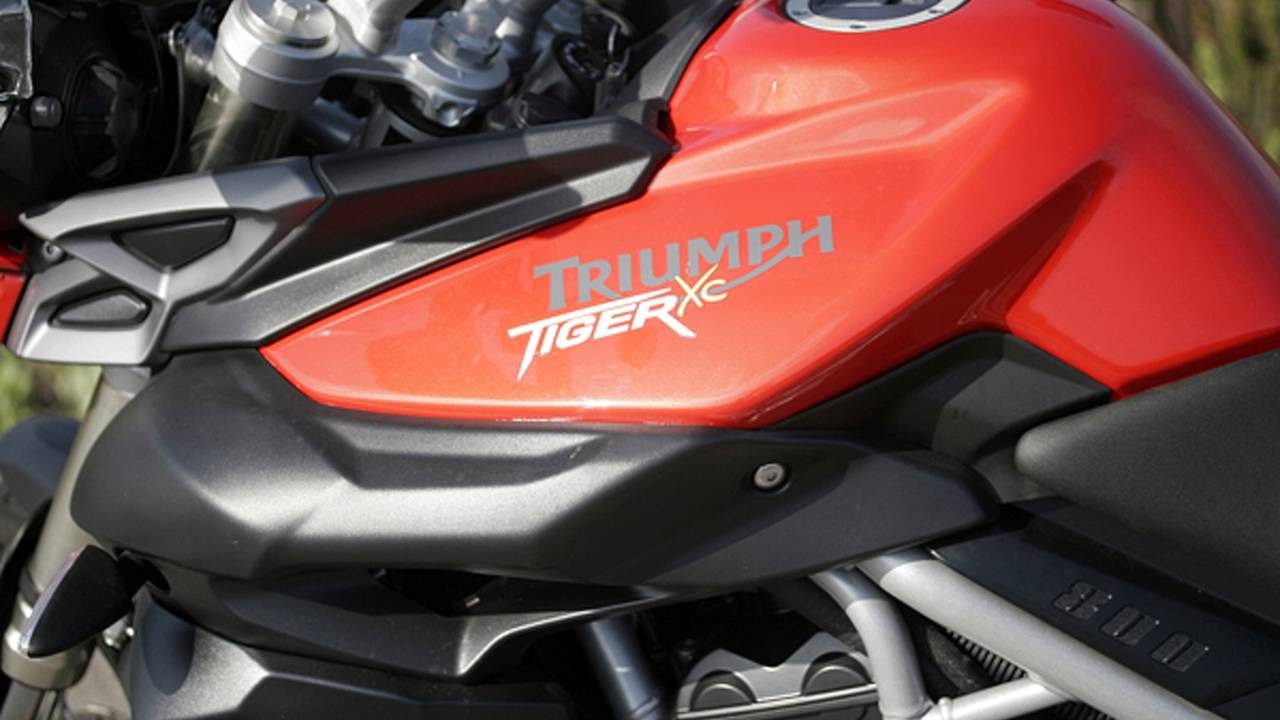 Ok, it’s benefiting from a SoCal sunset in these photos, but in person, I’m actually a huge fan. The engine is all sharp and angular to the steel tube frame’s soft curves. The body work is a total non-event, which isn’t a bad thing. It’s not over styled, it’s purposeful. I think that’s something it achieves through proportion rather than styling.

Yeah, I haven’t had it off road yet, but it feels like it should have the edge over the GS there too. All that feel should help, as will the flawless fueling and instant torque. The GS was geared way too tall in stock form for real dirt work, slipping the clutch at all times below 20mph is just too much. The Tiger feels like it should pull from a little slower.

I’m a little worried about the passenger peg hangers if I drop it, they’re welded to the rear subframe, which could write it off if I manage to summersault the Triumph like I did the BMW. The rest of the components are very well protected. Even the stock sump guard is impressively beefy and the radiator is pretty well protected by the stock plastics.

It’s not living up to its claimed 41mpg city/63mpg highway fuel mileage either. I’m getting an indicated 34mpg running around LA on a mix of surface streets and highways. The tank holds a reasonable 5.0 gallons, but the reserve light came on today at 140 miles. I ride quickly, but not over aggressively. 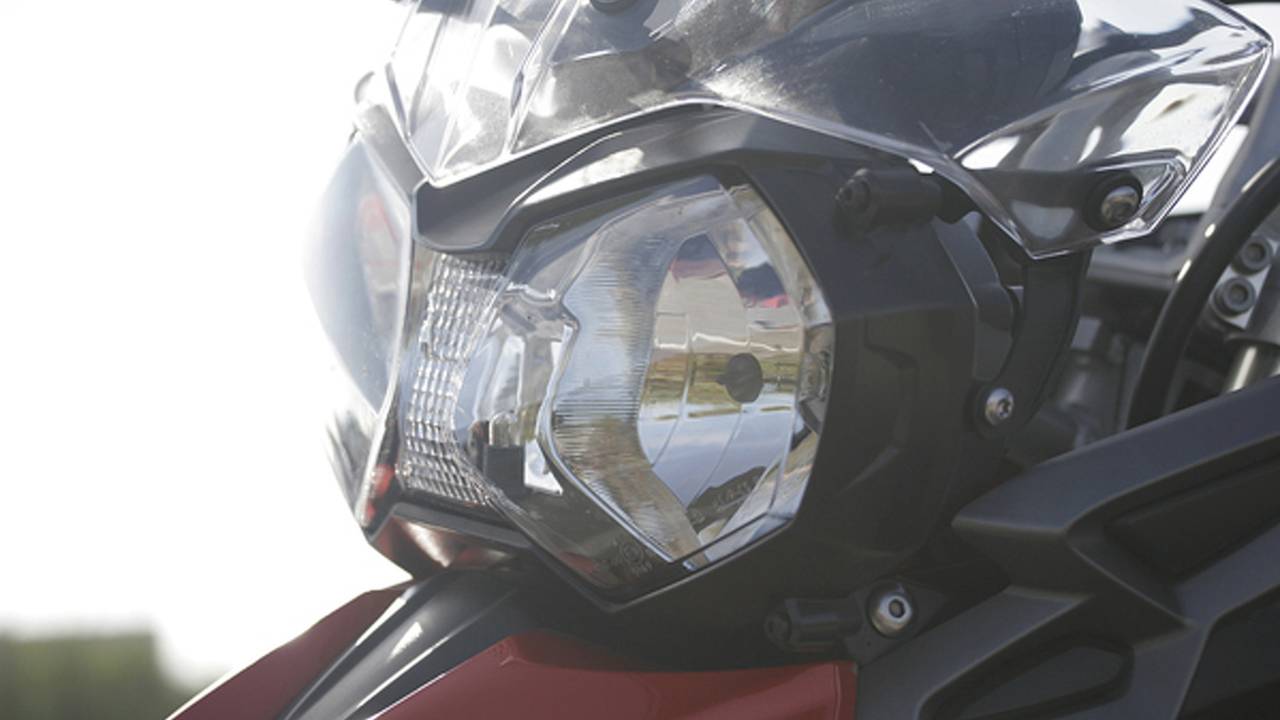 At $10,999 (sans ABS, but who wants that anyways?). The BMW starts at $11,395. The Triumph feels like a much more expensive, more fun, more capable, heads and shoulders better motorcycle.

We’re planning a larger feature on the Tiger in the coming weeks that will include off-roading and some canyon hooning. I’m just really amazed by it and wanted to share. In fact, I’m going to go get on it right now.