Comparing the Triumph Tiger 800 and XC

We compare Tigers to see what the difference is.

The Most Wonderful Thing About Tigers...: 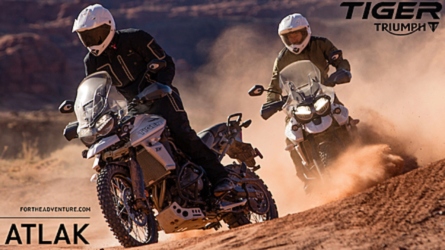 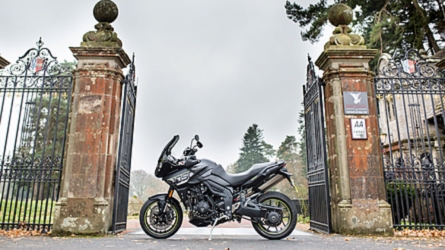 All last summer, Triumph over-hyped its new adventure tourers in a transparent attempt to curry coverage on publications like Hell For Leather. Then, when full pictures of the bikes leaked, we couldn’t help but be disappointed with something that, in pictures and on paper, appeared 99.9999 percent identical to the BMW F800GS. One squinted, one looked terribly shocked. Big whoop. But, when Kevin Ash first rode the Tiger, he brought back reports of a worthy, capable, unique motorcycle. Even that didn’t prepare us for what we found when we picked the bikes up on June 15. From the first ride it was obvious that these were surprisingly fun, all-round motorcycles that trumped the BMW on character, speed, comfort and on-road ability (we’ll take the XC off-road this weekend).

Now, let’s break down what the differences are between the 800 (white) and 800 XC (orange) and tell you what impact they have on the ride.

The XC’s bars sit .7 inches forward of the 800’s and a third of an inch higher. More noticeably, at 34 inches, the XC’s are .6 inches wider and sweep back six degrees less. Hopping between the two bikes, you do notice that extra width, but it doesn’t become particularly relevant until you’re lane splitting, when the XC is just a tad unwieldy through very tight traffic. The XC’s standard bash guards make up for that though, you can fly between mirrors confident in the knowledge that they’ll break before hitting your brake. You can also get a noticeable extra bit of height out of the XC’s bars by rotating them forwards, just enough for me (6’ 2”) to comfortably control the bike while standing up. The XC’s bars are rotated up and forward in these photos and you can see that, configured thusly, they do stretch the rider's arms out a bit.

Both bikes feature an easily adustable rider seat. Two bars front and rear sit in either high or low notches and are secured by rubber straps. It takes about 30 seconds to switch between high and low. The 800 can go from a very accessible 31.9 inches to a more comfortable 32.7. The XC starts at 32.2 and goes up to 34 inches, a height which is helping me stretch my legs out down to the low pegs and easily see over most cars.

Both seats are actually some of the best I’ve experienced on a motorcycle. They’re relatively slim, meaning it’s easy to put both my feet down at a stop, but still very supportive and plush.

Both tigers use a 17-inch rear wheel, but the 800’s is a lighter alloy item to the XC’s stronger spoked setup. At the front, the 800 attempts to maintain some image of dirt capability with a 19-inch alloy while the XC goes the whole hog with a 21-inch Excel rim.

It’s this difference, together with the rake and trail, that delivers the most obvious difference between the two bikes. Not only does the XC steer a little slower but, at very high angles of lean, its front tire will walk wide and it’s skittish over bumps while leaning too.

Because of the additional travel and because of what feels like more controlled damping on softer springs, the XC’s fork is a little plusher riding. Both deliver an astonishing level of feel that's unprecedented in the adventure touring class. Even with the front tire on the XC walking a bit wide and wearing quasi-dirt rubber, I was still confident enough to wear it virtually to its edge. Just for perspective, I’m approximately 1,000,000 times more confident in the front end on these Tigers than I am on an ’11 R1 we’ve also been riding.

The 800 is adjustable for preload only and has 170mm of travel. the XC has 215mm of travel and adds a remote reservoir and rebound damping adjustment. We didn’t bother touching the adjuster/s on either, they’re absolutely spot on in stock form. Again, the XC is a bit plusher riding without sacrificing control or capability.

Both Tigers are wearing the kind of stupid OEM tires that aren’t terribly good off or on road. The 800’s got Pirelli Scorpion Trails and the XC is on Bridgestone Battlewings. The Battlewings have perceptibly more grip front and rear, despite sitting on that 21-inch front wheel.

The problem with tires like these is that they attempt to combine both off- and on-road capability with cheapness. That cheapness is, of course, a problem with most OEM equipment tires, which manufacturers spec to save money at the detriment of attaining the full performance motorcycles are capable of. If you plan on staying on-road, you’d be better off plunking for proper sport touring rubber, if you plan on going off-road, you’ll want something with real knobs. I’ve spent a good deal of time with the Scorpion Trails off road, so have first hand knowledge of how worthless they are there. ADVRider is full of reports calling the Battlewings “Deathwings” for the same reason. 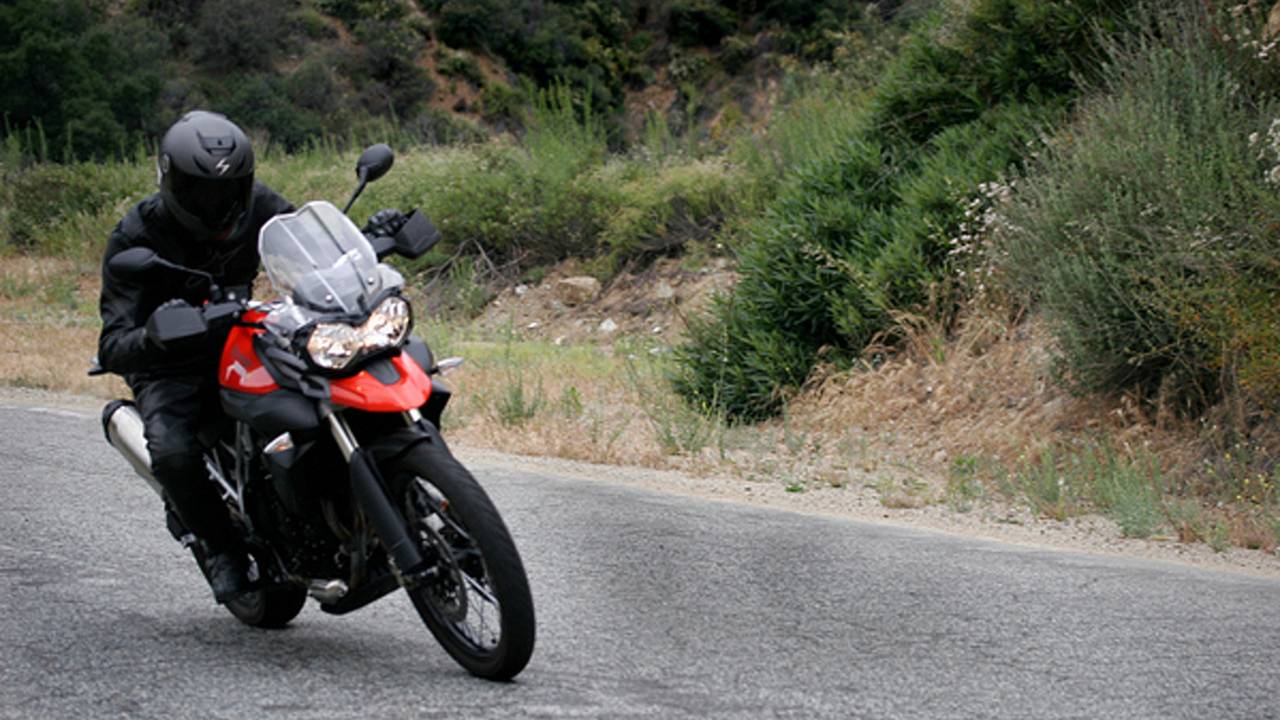 The XC adds bash guards and a beak, but those are optional on the 800 too. The beak makes the Tiger a little less awkward looking while the bash guards protect the levers (duh).

The 800 goes for a seriously affordable $9,999 ($10,799 with the untested ABS option). The XC is $10,999 ($11,799 with ABS). For that extra grand, you get a little better suspension and the extra bodywork. Riding them back to back, that extra suspension plushness makes spending up to the XC worthwhile, it just feels that much more comfortable. Of course, there’s another reason too.

Remember my story last week about crashing in my Astars suit? That was on the Triumph Tiger 800. Rounding a relatively straight forward uphill, banked bend in 2nd gear, I felt something drag hard as I tightened my line just before the apex while trail braking. Just as that happened, the front end washed out, lowsiding me and the Tiger.

What drug was the sidestand and sidestand mount. Parts that aren’t designed to fold when they drag, like the pegs are. That means that when they do touch down, they take some of the bike’s weight, in this case that was enough to leverage the front tire off the road.

This isn’t just my ego talking either. Evidence can be seen in the heavy wear on the sidestand and sidestand mount that’s runs parallel to the bike’s normal direction of travel and wear on the plastics, left handlebar and engine case that run 90 degrees to that.

I’d started the day on the XC, keeping up with an 1198 S mounted friend and Sean on his favorite bike ever, the Moto Guzzi Norge, as we rode past Azusa to Crystal Lake. From there, I swapped to the 800 and, heading back down the mountain, I immediately started dragging its pegs.

These action shots were taken in a location that Sean chose for its isolation and nice background. There’s barely a corner there, hence the lack of lean. I was further off the side of the bike at the time of the accident than these pictures indicate, so I was removing as much lean from it as possible in an effort to keep the pegs off the ground.

It should be noted that the uphill inclination of the corner and its slight banking likely contributed some extra suspension compression that reduced ground clearance further and led to the stand touching down, but it did so with about 1cm of unworn tire left to go. Again, that wasn’t the case on the XC, who’s tires were worn to the edge front and rear and never even came close to dragging peg, let alone stand. 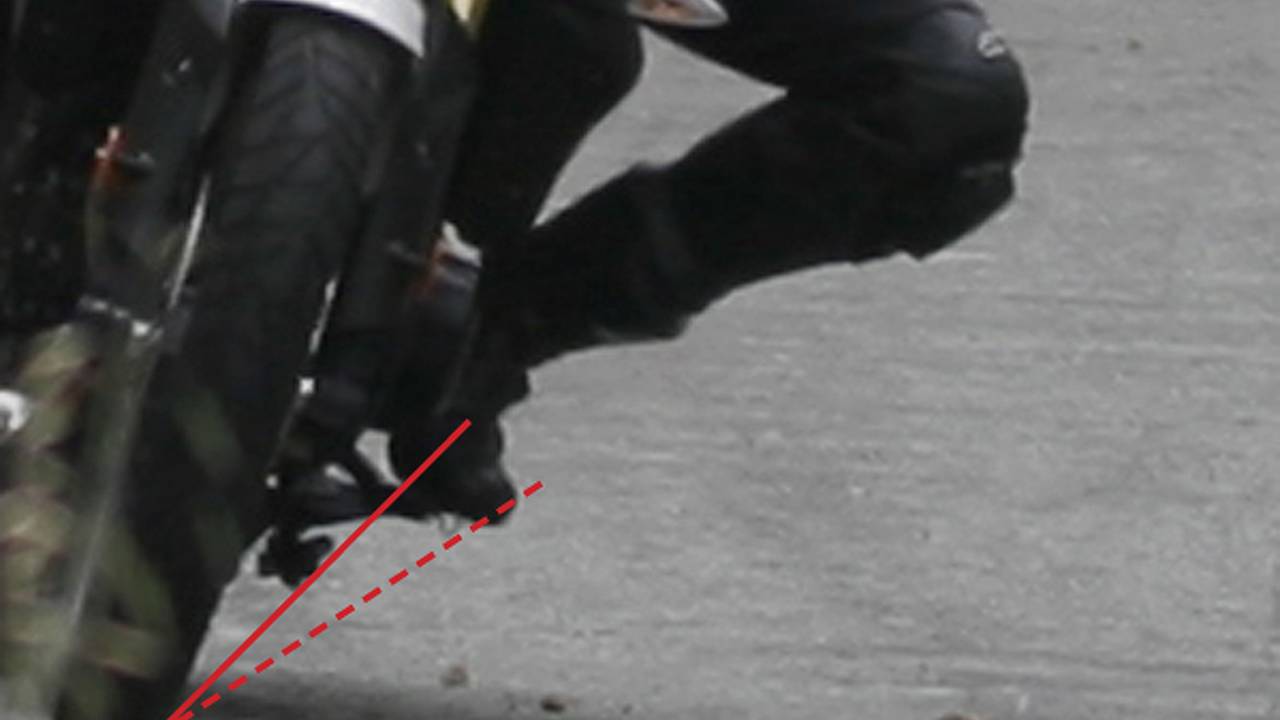 This photo demonstrates that lack of ground clearance. You can clearly see the sidestand and its mount hanging out in the wind under the peg. But, there’s two problems with this photo that means it fails to fully illustrate reality. One: I’m on the throttle, topping out the forks. Trail braking, I’d expect the front end to be about three inches lower. Two: the angle obviously isn’t totally front-on, this is simply the most illustrative photo we had after the fact. Still, you can see that there’s relatively little angle between peg touch and stand touch, which means there’s very little angle between hauling ass and landing on your ass. The fact that the stand drug even while the tire wasn’t fully to its edge probably remains the best indicator of the limitation.

It’s possibly worth noting that the sidestands have been photoshopped out of every stock studio photo of the Tiger Triumph provides to the press. 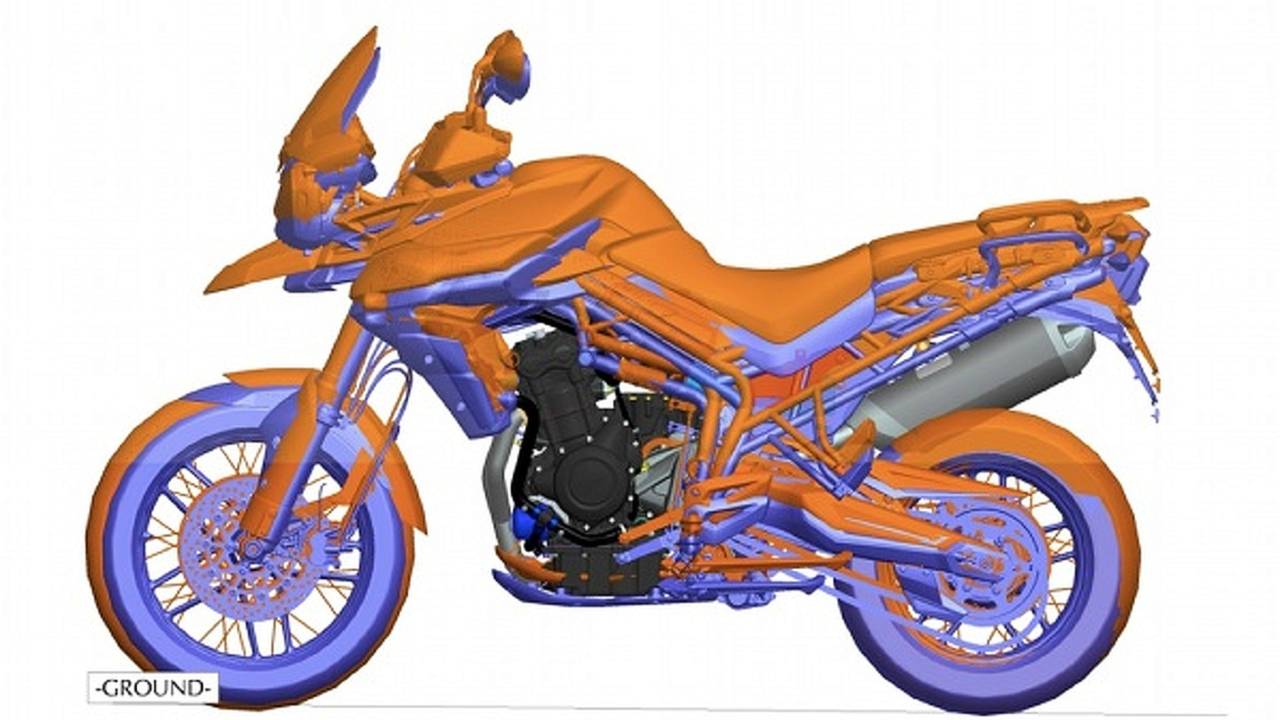 The XC (orange) has noticeably more clearance than the 800 (blue).

Having said all that, this issue is unlikely to affect most Tiger riders. I ride faster and lean further than most riders on sportsbikes, much less 800cc all rounder/adveture tourers. Riders looking for big lean angles and high corner speeds have other bikes to choose from in the Triumph catalog, most notably the 675cc Street Triple and Street Triple R, whose capabilities as motorcycles far exceeds my capability as a rider. It should also be noted that the taller XC has no issue with ground clearance.

I’ve seen the Tiger 800 compared to the BMW F650GS, which it matches more closely on price and on-road focus than it does the F800GS. That comparison is bunk for two reasons. One: the Triumph is simply a way better motorcycle. Both its engine and chassis elevate it far beyond the budget beemer. The smoothness, flexibility and power of this long-stroke triple have to be experienced to be believed. Parallel twins, schmarallel twins. Two: there’s another BMW that bears much closer comparison, the BMW F800R. Of course, the problem for BMW is that the same criticisms apply, its chassis and its engine seriously pale next to Triumph’s.

Looking at the spec sheets before I rode it, I was worried the Tiger was given a 19-inch front wheel to be adventure fashionable where a 17-inch and regular road rubber would work much better for what’s essentially a tall-rounder, not a bike that’s ever going to get really dirty. That criticism may still be applicable — there’s no doubt that a 17-inch would deliver more precise steering and more tire selection — but even so saddled, it still provides much more in the way of feedback, confidence and precision than BMW’s pricier naked roadster. The relaxed ergonomics and little windshield also make the Tiger all-day comfortable and tour-capable.

Then there’s the XC. Sean, who rode the same bike all day that we shot these photos, said I appeared slightly faster on the 800 than the XC, but it sure didn’t feel it. I’ve rarely been as confident in any stock motorcycle, much less one wearing silly tires and a 21-inch front wheel. I’ve rarely been as comfortable either, most bikes simply don’t fit my 34-inch inseam and ape arms this well. There’s faster bikes out there, sure. There’s probably better bikes for venturing into the wilderness on too. But for a practical, everyday motorcycle that doesn’t call too much attention to itself and doesn’t limit itself to any one speciality, the Triumph Tiger 800 XC is damn close to being perfect.