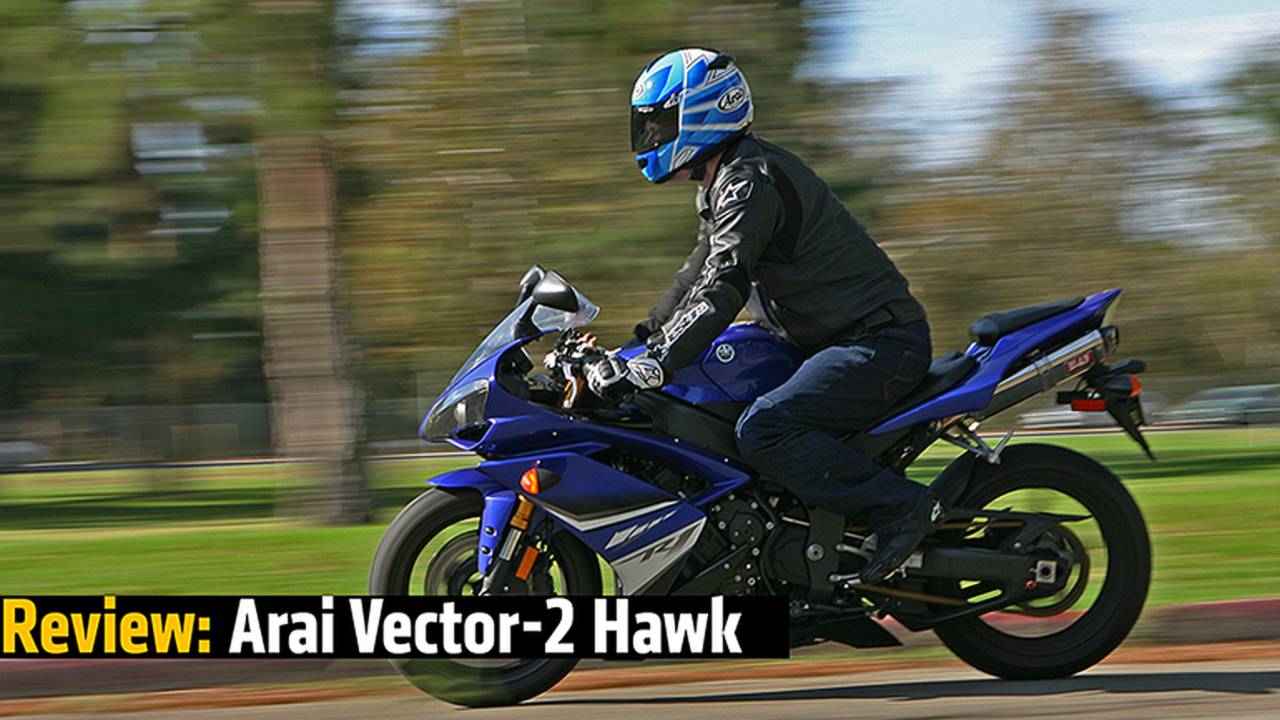 We review the Arai Vector 2 helmet with the new, safer R75 shape. How it fits, feels, and sounds inside the helmet and if it's worth the price.

Full disclosure. I’ve worn Arai helmets almost exclusively for the past 20 years or more. I choose them for the great fit, strong reputation for safety, good cooling features and design elements. That said, I’ve sampled quite a few alternatives and found several I liked, but not enough to change camps.

I was asked to review the Arai Vector 2 in Hawk Blue in the new R75 Shape, which promises a rounder, smoother and stronger shell. This was of particular interest to me because I commute on a 2008 Yamaha R1. The stock screen directs high-speed air into your face, so I require good aerodynamics from a helmet design.

Currently, I’m using an Arai Corsair-V Mick Doohan Special TT Edition (pictured below, this special edition is no longer offered) and I love it. The fit is superb, comfort and finish are exemplary and the cooling features are very effective. It’s on the noisy side, but I use molded earplugs for most journeys, so that’s not a major concern. There’s a dinky Gurney flap on the rear that adjusts for angle, reducing aero buffeting to an extent. The only major flaw of this helmet is its price, with an MSRP of $929.95 for the Corsair (the Joey Dunlop Special Edition features similar design and price).

Before that, I had an RX-7 Corsair in the Haga colors. Wonderful looking helmet, but the chin bar was too shallow. It left your chin vulnerable, particularly once airflow off the bike’s windshield got under it.

Arai Vector-2 is constructed with the R75 Shape that creates a round, smooth shell to help it glance of objects in the event of a crash

The Arai Vector 2 we’re reviewing was introduced earlier this year and features the company’s R75 Shape. Forgive me if you’re aware of the concept but, in its simplest terms, Arai has researched real world accidents and realized that a street rider travel at the legal maximum can suffer an impact greater than even the most stringent tests consider. Understanding this, the company decided that a heavy impact can be mitigated if the helmet is able to slide over surfaces and glance of objects on an uneven surfaces. This would help to divert the impact energy, potentially reducing its severity.

Therefore, the R75 Shape has a minimum radius of 75mm around most of its shell. It’s also very smooth, allowing it to slide across a surface rather than impact different objects. The shell is also stronger to ensure that it can withstand deformation that might otherwise focus the energy into one area.

Additional technology in the Aria Vector 2 includes the FCS (Facial Contour System) cheek pads. These multi-density foam pads are designed to support the cheeks and jaw by maintaining gentle contact thanks to a foam “spring” in each pad. The same pads also have a 5mm peel-away layer to allow you to customize the fit to an extent.

Chin vent allows a lot of air into the helmet. Brow vents in the shield are also effective

It’s also worth noting that Arai offers different size cheek pads as an optional extra. At $36.95 per pair, they can be bought in 15, 20 or 25mm thickness to fine-tune. There are also three different inner liners, at $52.95 each, that can either replace existing an liner or improve the fit.

And like all Arai helmets, there is a one-piece EPS multi-density foam liner inside the composite shell. It’s designed to cushion the skull, allowing strategic deformation to absorb impact energy.

Airflow is a very important element of helmet construction and your selection. Keeping you cool and the shield clear is vital to operator efficiency. The Arai Vector 2 has many of the same features as the top-line Corsair-V, including the brow slots in the visor, a chin vent, top vent and rear exhaust vents. There is also the neck exhaust vents that pull air from inside the helmet.

Overall, the vents work effectively, keeping my head cool even in the sweltering 90-degree summer temps we’ve been enduring. The chin vent doesn’t have a fancy mesh screen like the Corsair-V, potentially risking the entry of small bugs, although that’s unlikely. The chin vent also seems to have less resistance on the Arai Vector 2, which closes whenever the helmet is handled. It’s easy to open it again, but it's a slight annoyance.

There is only one top vent, rather than the Corsair’s three, but airflow is sufficient, and I didn’t notice an appreciable difference. The exhaust vents on the rear are a cheaper construction but operate effectively.

In short, the $639.95 Arai Vector 2 does practically everything the $930 Corsair-V offers but it doesn’t have the same quality trim and finish. Even Arai’s cheaper helmets are more expensive and better finished than the best of most other manufacturers, so there’s no obvious penalty from buying the Arai Vector 2.

Wearing the same Medium size in both models, I was very pleased that the Arai Vector 2 fits as comfortably as the Corsair-V. The only minor comment is that you do feel a slight pressure on the top of your forehead with the Vector, but it’s neither uncomfortable nor distracting.

Using it for prolonged periods in hot weather, the Aria helmet becomes like a second skin. With its decent airflow and comfortable liner, you can wear it for several hours and not experience discomfort or pressure points.

There may be slightly more noise than the Vector-V, but both are relatively noisy. Without any means to measure it, a pair of earplugs are the best remedy.

The Arai Vector 2 is a great helmet. Admittedly, the construction of race-spec Corsair-V is superior, but there is no obvious penalty with its lower-priced sibling other than slightly cheaper fittings.

As for dealing with the air flow over the windshield on my R1, the Vector-2 deals with it slightly less well than the Corsair-V. This surprised me because I thought the more modern, rounder shape would deal better with the buffeting, but maybe the Corsair’s spoiler really works.

At low speed, both helmets are very comfortable. However, up above 80mph, the air aimed into the shield and chin area lifts the Vector-2 up my face, making it uncomfortable to wear. I’m hesitant to mention this because a different seating position, shorter rider or better screen would prevent the problem entirely. Yet it does lift. And so does the Corsair-V, but it deals with the issue moderately better.

Before you ask, yes, I’ve tried different windshields on the R1. Some actually seemed to make it worse, so I reverted to the stock one and make do.

There’s really very little to choose between the two Arai helmets. Both are exceptionally well-made and very comfortable. Both have good ventilation and both look tremendous.

Considering the price difference of $300, you could say the Arai Vector 2 is something of a bargain. However, it’s the hidden technology in the Corsair-V that justifies its higher price, and it’s down to each individual rider to assess the value they put on their head.

The Arai Vector 2 is available in 19 different graphics and solid colors, giving you a wide selection. The Hawk Blue graphics are supposed to represent feathers. I prefer the back of the helmet, where there’s more white between the blue, but it meets my main criteria of being visible—I give drivers every opportunity to see me before they pull out!