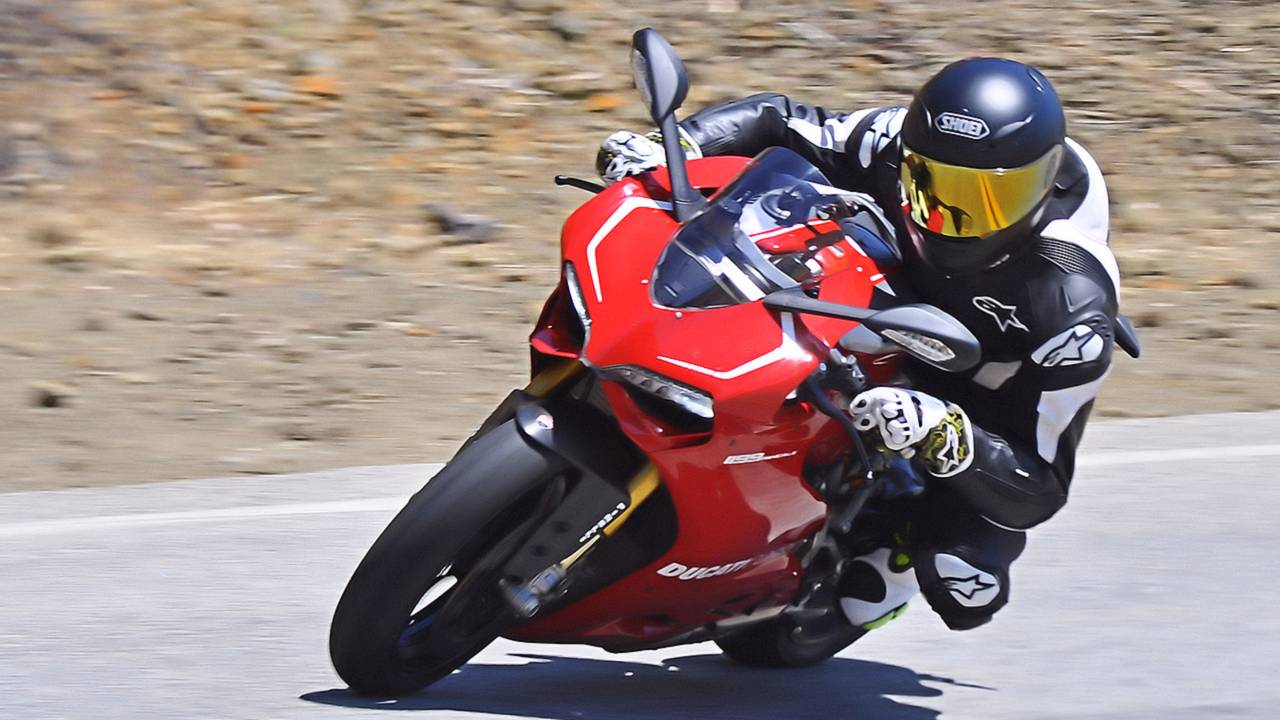 S or R: Which is better?

The Panigale is a very special motorcycle. It’s the first production bike to ditch the frame in favor of an airbox that doubles as a front subframe, connecting the forks to the front cylinder. The rear subframe bolts to the rear cylinder. That helps it achieve an extremely light weight: 361.5lbs (dry) in the case of the S model. That’s lighter than a 600.

The Panigale is the first Ducati to benefit from 2nd generation traction control, which works seamlessly to help you put the power down in an effective manner. Previous Ducati superbikes were fitted with a herky jerky system that was essentially there for safety only.

Included in that electronic rider aid package is also ABS brakes, quick shift and, thanks to a ride-by-wire throttle, switchable riding modes. You can also adjust the level of engine braking and even the damping settings front and rear through the full-color TFT screen. Preload remains manual.

The R retails the S’s top-shelf Ohlins NIX 30 front and TTX36 rear suspension, forged Marchesini wheels and Brembo M50 brake calipers. That’s good, because those are essentially the nicest components out there.

- Fairing extenstions in front of the rider’s hands

Ducati claims the same 195bhp peak power figure at the same RPMs for both bikes, but because the included exhaust system is wink wink, nudge nudge in terms of legality (it ships uninstalled), they don’t tally the additional 7bhp it brings. So figure the R makes 202bhp and 100lb/ft of torque.

Particularly if you’re planning on racing the R, which is really the market this ultimate Panigale is going after. Its racers that stand to benefit most from the increased RPMs and adjustable swingarm pivot. The former allows them to hang on to a lower gear for longer in corners, increasing drive, while the latter increases their ability to set the bike up for specific weather conditions, tires and tracks, choosing to maximize stability, drive or turn in speed.

The S comes in solid red or the white version you see Adey riding here.

I rode the S up Angeles Crest Highway to Newcomb’s Ranch and the R back down. Then spent about two weeks using the $30,000 bike as everyday transportation.

The most apparent differencesbetween the two obviously come from the considerably lower gearing on the R. Where the S uses 15/39, the R’s two extra rear teeth increase thrust at full throttle in 3rd gear by 10 percent and by 18 percent in 6th. While no, we aren’t hitting full throttle in top gear on the road, there remains noticeabley stronger drive on the R. It also becomes much more prone to pulling wheelies simply through aggressive application of the throttle.

The other big differences come from the screen, which does a much better job of directing wind blast over your shoulders, even at legal highway speeds and, surprisingly, that suede seat. Where my Roadcrafter was unable to grip the slippery stock seat at all, the suede helped me stay in place during braking and acceleration and helped me relax more while hanging off around corners.

The really big difference though? Some guy named Troy Bayliss was the last person with this particular bike and he’d set up the suspension for laps at Chuckwalla. With them, the R’s steering was notably sharper than the stock-setting S, you could be more aggressive with trail braking and the bike was more stable while driving out of corners, allowing you to get on the throttle early. Want to try them for yourself? Set up the preload for your bodyweight, then plug these in using that TFT screen:

“Our” R was fitted with the stock 200/55 rear over the slightly taller 200/60. Those settings also made the R an absolute bear around town and on Los Angeles’s bumpy highways, bouncing me fully out of the seat on several occasions.

Neither the S nor R is ideal for use on city streets, through real world highways or in congested traffic. The Panigale’s intense, take-no-prisoners experience actually makes it slower in those environments than most other sport bikes even practical machinery like a V-Strom 650. Even in Sport mode, it surges unpredictably, occasionally cuts out under braking, tracks grooves and ruts and literally spits fire; the Termignoni will shoot a 6-inch flame on overrun.

But, get it on a smooth, twisty canyon road and you’re rewarded with the absolute fastest, most responsive, sharpest tool possible. Riders of less than expert ability beware, this bike will cut you.

“I felt more at home on the R,” says Adey, who’s pictured in these photos. "Between the more comfy race seat and track suspension settings left by Troy Bayliss. The bike was was more inviting to go fast on. In the same breath it was also quite tame and rideable on the street. Throttle response is crisp and predictable. Keep in mind I always ride in race mode.”

The R’s extras are totally worthwhile and part of a reasonably affordable package. The aerodynamics work on the road just as well as they do on the track. The seat does a much better job of holding you in place. The gearing seriously improves acceleration. The apocalyptically loud exhaust sounds absolutely wonderful.

In fact, riding around on the R is akin, at least in our minds, to driving something like a Ferrari Enzo or Lamborghini Reventon. You’re obviously not going to be using its performance to ride to a party at Vivienne Westwood, but when you get there, you’ll actually be able to park right out front. As an added bonus, the R’s subtle flash only tells cognoscenti that you dropped serious dime on this bike. Cristiano Minchio, the CEO of the brand's US operations, knew what it was, and was suitably impressed, but everyone else figured it was just another a nice Ducati.

The latest Pirelli Diablo Supercorsa SPs do a good job of heating up quickly and providing as much grip as you’ll ever need, even on 65 degree days and around town.

Those tires, combined with both ABS and TC, actually lead to a reassuring sense of safety. Something that’s welcome on such a fast, intimidating machine. The brakes always delivering commanding stopping power, even over sketchy, bumpy surfaces and you can wind on that immense power with confidence.

The full-color, TFT screen is bright and conveys information clearly and immediately.

Fueling that’s so perfect at wide-open throttle becomes jerky and unpredictable in city traffic. The R was prone to cutting out while gently decelerating, such as you would do while approaching a red light.

Even with the new-for-2013 engine and exhaust covers that are now standard acros the Panigale range, the bike gets extremely hot at city speeds.

Comfort, while exponentially improved over previous Ducati superbikes, is still…limited. Even while riding fast on good roads, vibrations made both my hands and feet numb after just a few miles and your wrists will cry for mercy after 10 minutes in city traffic.

Changing settings through the TFT screen using the turn signal switch and two little buttons located above and below it is terribly confusing and frustrating. Even just switching from Race to Sport mode, you’ll find yourself turning on the indicators and swearing.

The R feels like it’s fitted with more aggressive brake pads than the S. Great around a track like COTA, where you’re regularly braking from very high speed, not so great in traffic, at night, on slippery roads. ABS helps a lot, but the brakes still end up being a little much.

TC, ABS and all the other stuff combine to make both the S and R confidently exploitable for expert riders giving it all of their attention. They do not make the Panigale in any way accessible or appropriate for anyone else.

$29,995 makes this the cheapest R-model Ducati ever. That’s great if you plan to go racing with it, but the bike is unnecessary if you’re only planning to ride it on the street or use it on trackdays. We’d add a suede seat, lowered gearing and taller screen to the S and spend the remainder on tires and gas. You’re going to use a lot of both on this Ducati.

That the Ducati 1199 Panigale R remains useable on the street is quite the accomplishment, given its absolute-fastest race track performance. Still, you can go just as fast on the road with the S on a bike that looks just a nice to 99.9 percent of people. Maybe because we’re fresh off hitting 202mph on one down at COTA, but we didn’t mind posing on this R one bit. “I’ve got the fastest bike in the world, in my garage,” just has a nice ring to it.