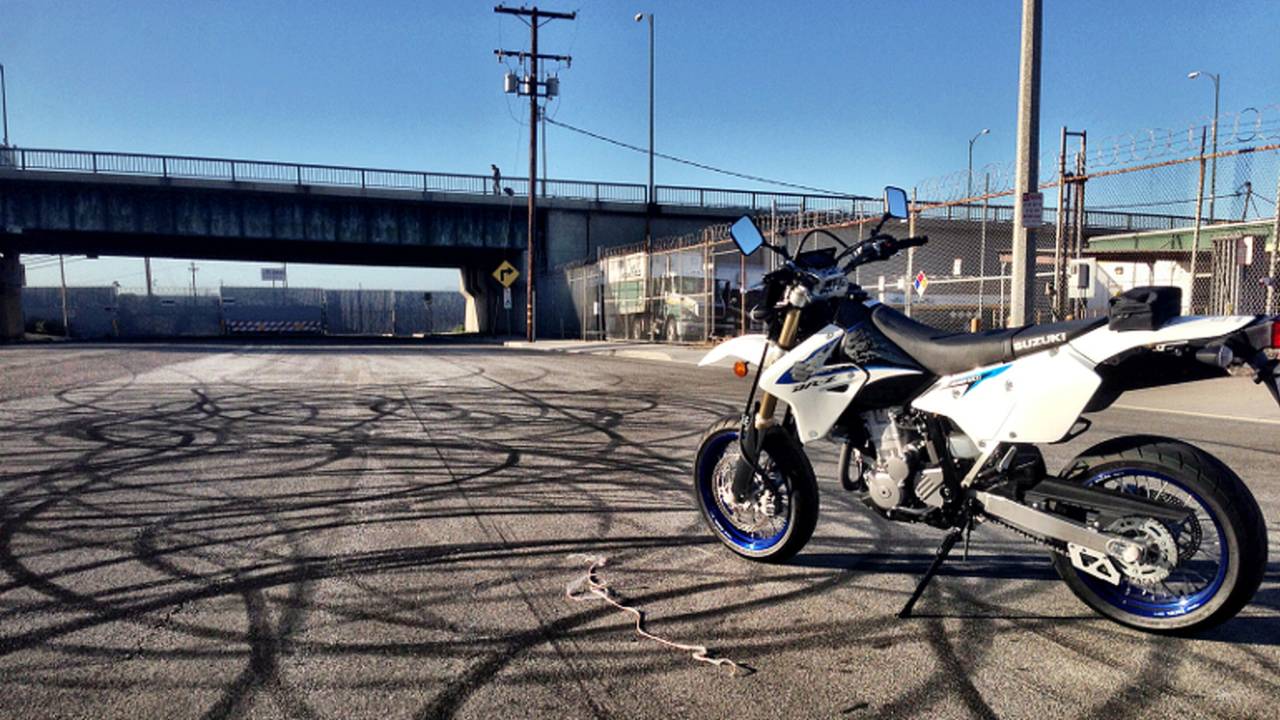 RideApart Review: 2013 DR-Z400SMAfter a short absence from the American market, the Suzuki DR-Z400SM has been reissued. A supermoto for everyman? ...

After a short absence from the American market, the Suzuki DR-Z400SM has been reissued. A supermoto for everyman?

Stickers. The 2013 Suzuki DR-Z400SM is exact same one that was last on-sale in 2009, from the engine down to the toolkit secured to the back, just with different plastics and stickers. That's no bad thing, the DR-Z has always been the only real supermoto available from a Japanese manufacturer, over 250cc.

I have been using the Dr-Z400SM to get between and around Los Angeles and Long Beach for the past few weeks. As I mentioned, I've also spent a lot of time on the dual-sport version, the DR-Z400S. Instead of rehashing every issue, I'll just be touching on the ways the two bikes compare.

One of the main differences is the suspension. The SM version uses Showa inverted front forks instead of the 49mm cartridge-style forks with protective rubber boots of the S version. Both feature adjustable compression and rebound dampening, but the inverted forks reduce unsprung weight and help to improve the super moto aesthetic.

Again, refer to the DR-Z400S article for a more broad review on the DR-Z400 as a platform, this is more about the change that transform it from dual-sport to supermoto.

While I loved riding the DR-Z400S, my biggest complaint about it was the brakes. The DR-Z400SM's upgraded brakes work brilliantly on the street, exceeding my hopes in this department. Feel is good, as well as bite and grip. It raises an interesting question when determining which model is right for you, the brakes on S being a little easier to manage in the dirt (less power means they wont lock up in the dirt quite as easily) but the brakes on the SM better for street. If you were looking to buy one just for the street, the SM is the obvious choice, but if you were going to try and split duties, an SM with a second set of wheels might work better than the reverse.

The lower overall height makes the SM a little more accessible, though it is still quite tall with a seat height of 35 inches. While it's a good thing the bike is a little easier to get a leg over, I actually liked the height of the S model for lane splitting.

The USD forks and 17 inch wheels help a great deal with stability at high speeds. Where I had incredibly intense speed wobbles on the 400S at speeds over 70 (amplified by the dirt-focused Dunlop D606s we fitted), the 400SM handled freeway speeds much better and I felt much more planted with wobbles only on rough pavement or in areas with high winds.

While part of the fun of riding super moto is the long and soft suspension, I found that to be a little too soft for my liking on the DR-Z. The front nose takes a huge dive anytime you apply the front brakes and you could feel the instability during moderate to high speed cornering. Some of this can be modified by playing with the suspension settings, but we'd like stiffer suspension overall for a bike this capable.

The range, while the same as the DR-Z400S, felt more frustrating on a bike oriented more for the streets. When I found myself riding the DR-Z400S around town or out to dual sport rides, I was not as annoyed to have to stop every 80-100 miles to fill up. The DR-Z400SM presents itself as more of an all rounder and commuting tool, so it bothered me a little more to have to stop and fill up every other day, but that's probably just me whining.

The DR-Z400SM has a MSRP of $6,999, while the DR-Z400S retails for $6,499. We think $500 is well worth the upgrades to the brakes, suspension, and wheels. If I were deciding between the two, I'd go with the SM and get a set of dirt wheels and tires instead of getting the S and then trying to get street wheels and tires and then trying to fix the brakes. The lighter Yamaha WR250R retails for $6,700 but makes less horsepower and torque. The new 2013 Honda CRF250L has a suggested MSRP of $4,500, but it weighs the same and only makes 18bhp. If you look bigger, the Honda XR650L retails for $6,700 but it weighs 30 pounds more while making similar power to the Suzuki.

Is a supermoto for you? If you're looking for a fun bike to get around town or to play with on tight roads, you can't really do better, but the vibey single-cylinder motor and limited high-speed performance mean you won't want to be hopping on the highway for much longer than half an hour. The DR-Z400SM takes everything that great about motards — the light weight, insane handling and punchy engine — then puts all that in a package that's actually reliable, accesible, fun and easy to buy and own. As good for beginners looking for a practical commuter as it is experienced riders looking for a fun bargain.