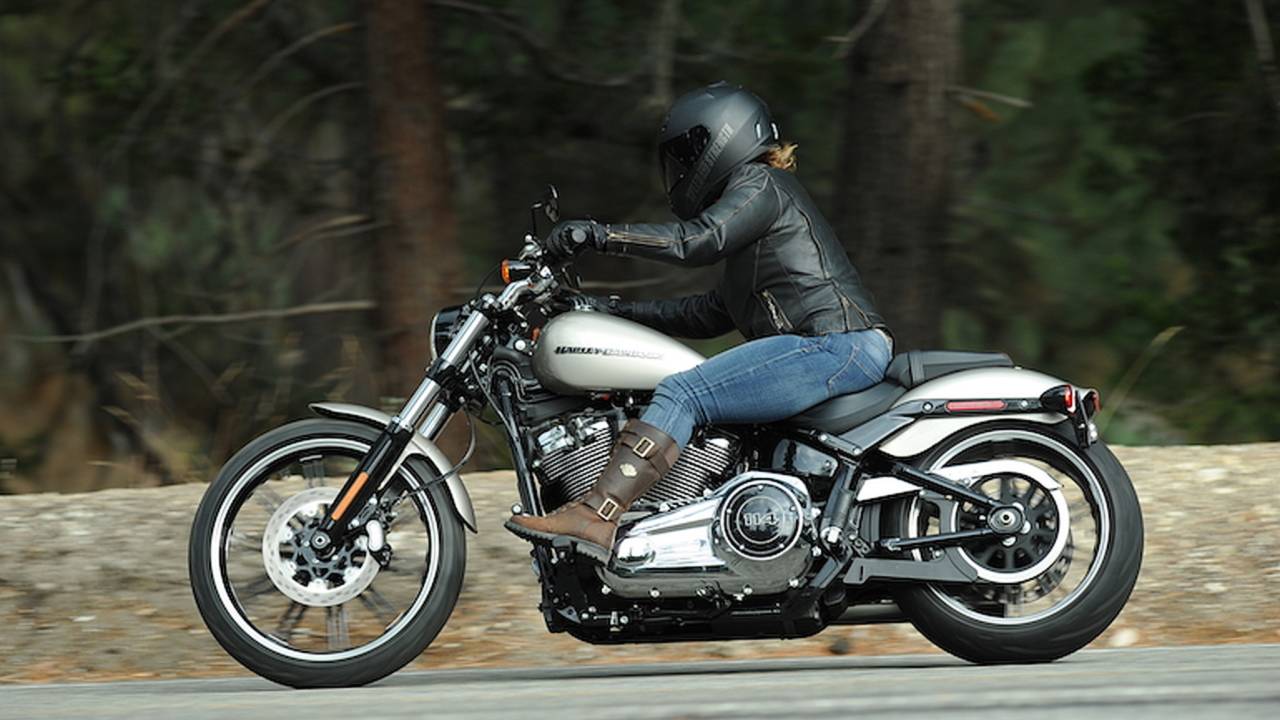 The Breakout's beauty is more than skin deep.

If Michael Scofield, from the television series "Prison Break" were going to break out of prison on a motorcycle, the Harley-Davidson Breakout (Get it?) would be the speedy bike he would do it on. I guess this brings a whole new meaning to Harley-Davidson’s Slogan, “Freedom for All,” but I imagine he'd feel the same radiating sense of freedom in his chest that I did when riding this lean, mean machine.

Earlier this month, Harley-Davidson brought me out to Southern California where I got to ride all the 2018 Softails through the San Gabriel Mountains. We stopped to take pictures along our journey, at one point stopping next to a park fire station. Shortly after pulling in to the fire station parking lot, a group of tall, lean firefighters pranced out to see what we were doing. Being the only girl in the press group, I... well... I enjoyed their attention, and was eager to answer their questions about the new lineup as best I could. Intrigued by its "need for speed" look, the firefighters voted the Breakout the bike they would most like to ride. Which sparked imaginings of myself riding on the back of the bike with one of the firefighters – blasting through flames to make an escape…

lol. A girl can dream. Anyway, about the bike...

In all seriousness, the Breakout has the capacity to deliver some serious speed. It is the gasser born on the dragstrip, powered by the Milwaukee-Eight engine first introduced last year in Harley's touring lineup. For the Breakout, the engine is available in two "sizes" – the standard 107 (1753 cc) or an optional upgrade to the 114 (1868 cc), for those looking for even more power.

A 35lbs weight loss from 2017 gives the Breakout enhanced power to weight ratio for better acceleration. Riding the Breakout 114 brought me back to riding the Sturgis Dragstripfor the first time (This summer I got a chance to tear it up on an S&S T124 Dyna). It had that powerful surprise feeling that comes when you twist hard on the throttle and get a chest full of torque. Realistically, the 107 would be enough power for the average rider, but the 114 was exciting to ride.

Winding through the twisty roads of the California mountains, it was hard to get a full appreciation for the power. So, I decided to take it for another little test ride on straighter roads where I could really open it up. I went so fast I lost my hairband. Women, I would recommend a windshield, full-face helmet, or good riding glasses on this bike. I was wearing a three-quarters helmet at the time and wind was blasting under my glasses, bringing tears to the eyes and a little run in the mascara.

(For what it's worth, RideApart always encourages the use of a full-face helmet. I urged Leah to wear one while on the press ride and you will see those are the photos we've chosen to publish. – CC)

Harley-Davidson redesigned the chassis from scratch to harness the heart-pounding gem that is the Milwaukee Eight. The ridged mount of the dual counterbalanced engine and monoshock suspension allow for a smoother ride. In shrink-wrapping the frame, however, the gas tank went from holding 5 US gallons (18.9 liters) to 3.5 gallons (13.2 liters). The changes from the 2017 model year also bring the forward controls closer to the rider, which opens the market up to a shorter person like me to comfortably reach the controls. Though, I still needed to scoot up to the gas tank to get close enough to reach the handlebars and footpegs.

This new chassis rebuild also allows for an improved lean angle and more responsive handling. As mentioned in my previous review, I had fun learning to scrape pegs along the Angeles Crest Highway.

The Breakout maintains the 21-inch front wheel of previous models, with a meaty 240mm-wide 18-inch rear wheel. A single disc up front and and another at the back provide adequate stopping power. ABS is standard. External rear shock pre-load adjustment allows you to key the bike in to your needs. I was able to ride comfortably over potholes on the lowest setting. The low-slung seat (25.6 inches) has been modified to be more forgiving to one's back end while riding.

Like the whole of the Softail lineup, the Breakout has some fun added features over last year's model. LED lighting improves vision and visibility. A keyless ignition with Harley-Davidson Factory Security System for theft protection comes standard. And there's a USB port to keep your device charged on the road.

I'm not sure if this is an issue just for people who are vertically challenged, like myself, but many of the speedometers in the Softail lineup created issues for me. I felt like I had to do an exaggerated chin tuck to look down at it, as my full faced helmet got in the way of freely glancing down. That said, I liked the set-up on the Breakout, where the speedometer is integrated into the bar clamp. This gives the bike a cleaner look and – theoretically, at least – brings the biker’s eyes a little up, toward the road, where attention should be focused.

The Breakout's whole-hearted "need for speed" look is brought out with a black frame, which makes the powertrain pop. I’d be interested to see what a blacked-out front fork could do to really make the Milwaukee Eight stand out. The chopped front and rear fender give the Breakout a classic chopper look. Overall, I like the shape/style of the exhaust. However, I’m still trying to figure out what’s going on with the multicolored look, where the pipes are chrome and the cans are black. I guess the idea is that it "hides" the cans from a distance and makes it look like you have slash-cut pipes. But something still doesn’t feel quite right about it aesthetically.

I could see this bike being fun for someone to show off on poker runs, or short hops with friends. If cross-country travel on two wheels is your goal, though, I would recommend steering toward the Deluxe or Heritage. Although, if your heart is set on a Breakout you could probably modify it for long-distance duty.

I really enjoyed riding the Breakout overall and would gladly race it on a drag strip, because I know I would leave other riders in the dust. Or, ahem, I could be persuaded to ride passenger if I got to hold the six-pack abs of the lean firefighter I imagine riding it!