What's it like to ride the fastest electric racing motorcycle ever made? Find out in this 2014 Brammo Empulse RR Review.

Well this was fun. Late last year I became the first person outside Brammo to ride their factory race bike. Was it fast? Well, with 173 hp at the wheel and 166 lb.-ft. at the crank, what do you think? Read all about it in this 2014 Brammo Empulse RR Review.

Let’s start this with a simple comparison. The fastest gas-powered superbike available in showrooms today is the Ducati 1199 Panigale R. It’s been shown to make 186 hp at its wheel and around 100 lb.-ft. of torque at its crank. It weighs 417 lbs (wet) and, in the hands of Brammo factory racer Eric Bostrom, lapped Laguna Seca in 1:33.07.

This Empulse RR weighs 467 lbs and Eric’s teammate Shane Turpin (who rides this “Sauvetage” graphic version) lapped Laguna Seca in 1:32.581. So yes, this electric race bike is fast. Faster, in fact, than any Internal Combustion Engine bike ever sold to the public.

Of course, you can’t buy one of these. The Empulse RR is a two-off prototype developed specifically for electric motorcycle racing and shares virtually nothing with its showroom counterpart, the Brammo Empulse.

Well, the basic layout is a little similar. A massive aluminum beam perimeter frame (unique to the RR) wraps the battery pack, located where the engine on an ICE bike would traditionally be. Hiding under the “tank” are the motor controller and other electronics. The motor is tucked up under the swingarm in an arrangement that creates maximum room for the batteries without lengthening the wheelbase. In fact, at 56.5 inches, the RR’s wheelbase is a tenth of an inch shorter than that of the Ducati.

As on the production bike too, the shock does without a linkage. But that’s where the similarities end. On the RR, that shock is a top-shelf Ohlins TTX36 item and the forks are similarly fancy FGRT 200s.

The RR’s Lithium-Ion battery pack — a structural frame element — holds 14 kWh of electricity, good for about five laps of a track at race pace. That not very many, but it wasn’t long ago that the performance of electric motorcycles matched their disappointing ranges.

Power is produced by a proprietary Parker Racing motor, an ongoing development project with Brammo. The day I rode the bike, a Parker engineer was going over performance parameters with the bike’s designer, Brian Wismann, in the pits.

“We believe the Brammo Empulse RR to be the fastest track-prepared electric motorcycle in the world,” Brian told us. “This bike is an evolution of the one we developed in 2010, and shows what is possible by using racing as a way to rapidly develop technology. The first iteration of the Empulse RR made about 80 hp and struggled to keep pace with the B-group at a trackday. Now, we're typically the fastest bike in the A-group and beating the gas bikes heads-up in races! It is that pace of development that makes this bike so special and this effort so valuable to our company. We've been successful in racing because we stuck to it, believed in what was possible, and learned from our mistakes. 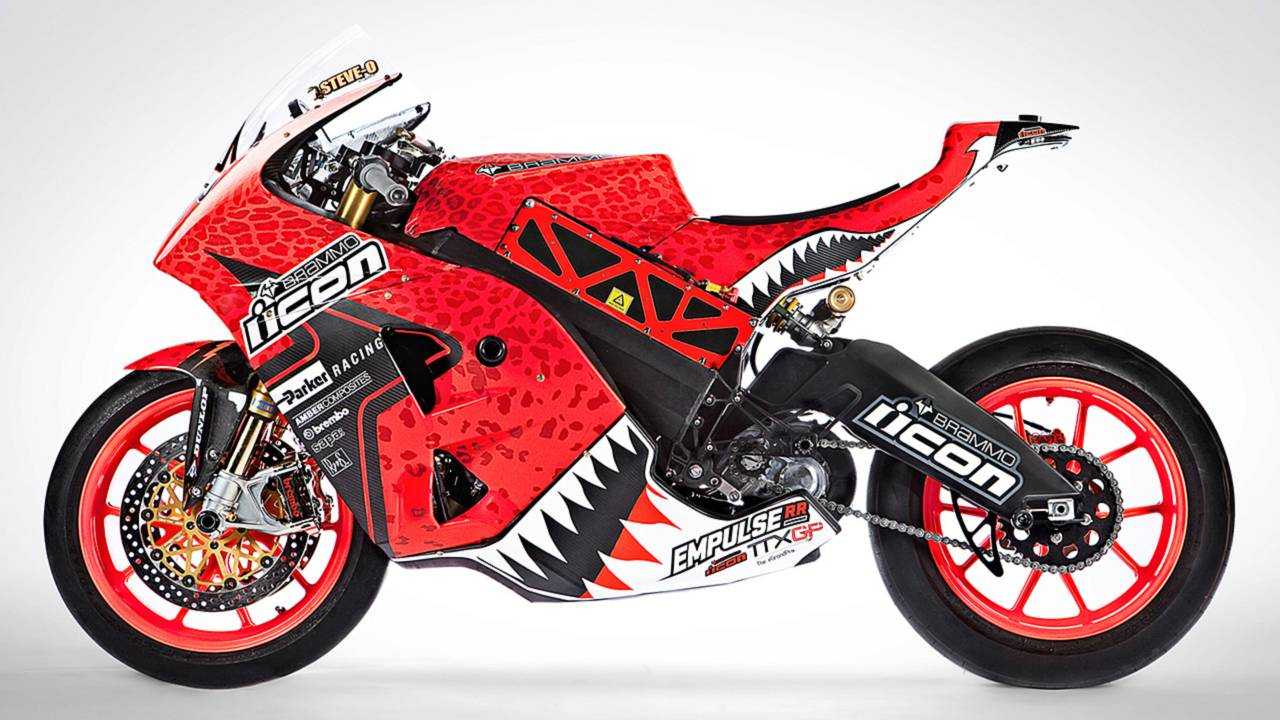 A little Luftwaffe, a little acid trip a little P-51. All fast motorcycle.

Brian’s not lying about the speed. On Thunderhill’s short, half-mile front straight, the RR was able to reign in and pass any other bike on the track with us that day. That included BMW S1000RRs and the aforementioned Panigale.

Of course, with me on board, those same bikes would just have to pass me again through the track’s long, sweeping Turn 1. I was that guy at the last Pacific Track Time event of 2013, but being that guy up against very fast riders on very fast bikes is saying something.

All this came about when my editor at Playboy called on the previous Tuesday. “Wes,” he said. “We’ve got a two page hole in the March issue. Can you fill it by next week?” I said yes, obviously, which is what you do when Playboy calls, then picked up the phone to Brammo, who just so happened to be testing that weekend and were happy to oblige. That Saturday, I zipped on my Roadcrafter, strapped my leathers to our loaner Honda CB500X’s tail and road the 500 miles from Los Angeles to Thunderhill in freezing-cold weather. My bar tab at that night’s PTT Christmas party was the most significant expense of the trip, the little Honda cost me less in fuel than a single taxi ride to LAX would have, much less the last-minute flight up there.

The next morning, I wiped frost of the Honda’s seat, rode the 12 miles from hotel to track, then changed into my leathers in front of everyone while Eric — who rides in a near-identical Icon one-piece — made fun of my camel toe.

My first two sessions out on the very cold track were aboard a Brammo Empulse TTX, the track-prepared version of the production Empulse. It performed exceptionally well, confirming my impression of that bike from two years ago. It turns very quickly, but is very stable and communicates exceptionally well. Speed is up there with a 650 twin. A perfect learning tool for a new track, particularly in such cold temperatures.

When it came time to hop on the RR, Shane nervously showed me around his one-and-only race bike, pointing out his unique setup — he likes an incredibly sensitive front brake and little regenerative braking — and suggested I turn up the steering damper quite a bit. I ignored him, something I came to regret on just my second lap, as the RR wheelied violently over the blind crest in Turn 9, shaking its head during my crossed up landing. I turned that damper all the way up as soon as I was back in the pits while Shane laughed at me.

The thing I’ve found while riding all these electric motorcycles is that, free of cylinders and gearboxes and airboxes and intake tracts and their defined arrangments and sizes, designers are left free to optimize the total package for ideal handling. The batteries are obviously the heaviest component and they can be clustered around an ideal center of gravity. Their location can be moved through trial and error to find that ideal, too. Given that, their weights don’t end up being the burden on handling you’d expect. Well, that’s a bit of an understatement, because their designers are left free to conceive an ideal package, the handling of electric motorcycles can also approach an ideal. Which is then aided by their lack of reciprocating inertia and its impact on steering speed and feel.

The Brammo Empulse, the Mission RS, the Energica Ego and now this Empulse RR are some of the best handling sport motorcycles I’ve ever ridden, regardless of their powertrain. With them, designers no longer need to choose between steering speed and stability; both are possible in the same package. A package whose attributes can now be individually tailored to a very fine degree according to rider preference. It’s as if handling and performance characteristics are now simply a user-alterable variable. Like engine braking? Just dial in how much. Want wheelies? Tell the computer. Want faster steering? Raise the battery pack a little.

So, on a track, with a full race crew in support, on Dunlop’s best SBK-spec slicks, was this the fastest, best handling bike I’ve ever ridden? Yes it was. But that’s not what made it remarkable. What truly makes the Empulse RR special is how it manages to squeeze so much performance into such a friendly, accessible package.

Without a gearbox, that 166 lb.-ft. or torque is instantly accessible, wherever and whenever you are. Want to pass a herd of dozen or so slower riders onto the front straight? Just focus on your line, the twist that throttle. There’s no worrying about being in the right gear for the corner, hitting rev limiters or lugging the motor, just more acceleration than you could ever want, available whenever you’re holding on really tight.

It also inspires confidence near-immediately, even with temperatures peaking in the 40s during the afternoon. There’s so much feel of what the tires are doing that you begin to get the impression that it’s nearly impossible to make a mistake; you just have too much information at your disposal to make one.

Find yourself taking an unfamiliar line on an unfamiliar track? Change it. It’s that simple. You can add lean or take it away to your heart’s content, quickly, precisely and without consequences.

Just three short sessions later, it was time to call it a day and let Shane get back to testing. Leathers off, Roadcrafter on and it was back on the CB500X and back to LA about eight hours later. Somehow my fingers survived the trip without frostbite, but my concept of motorcycle performance didn’t fare so well; this in-house project by a small startup in Oregon is changing what motorcycles are capable of. Suddenly, anything else feels not just slow, but outdated. 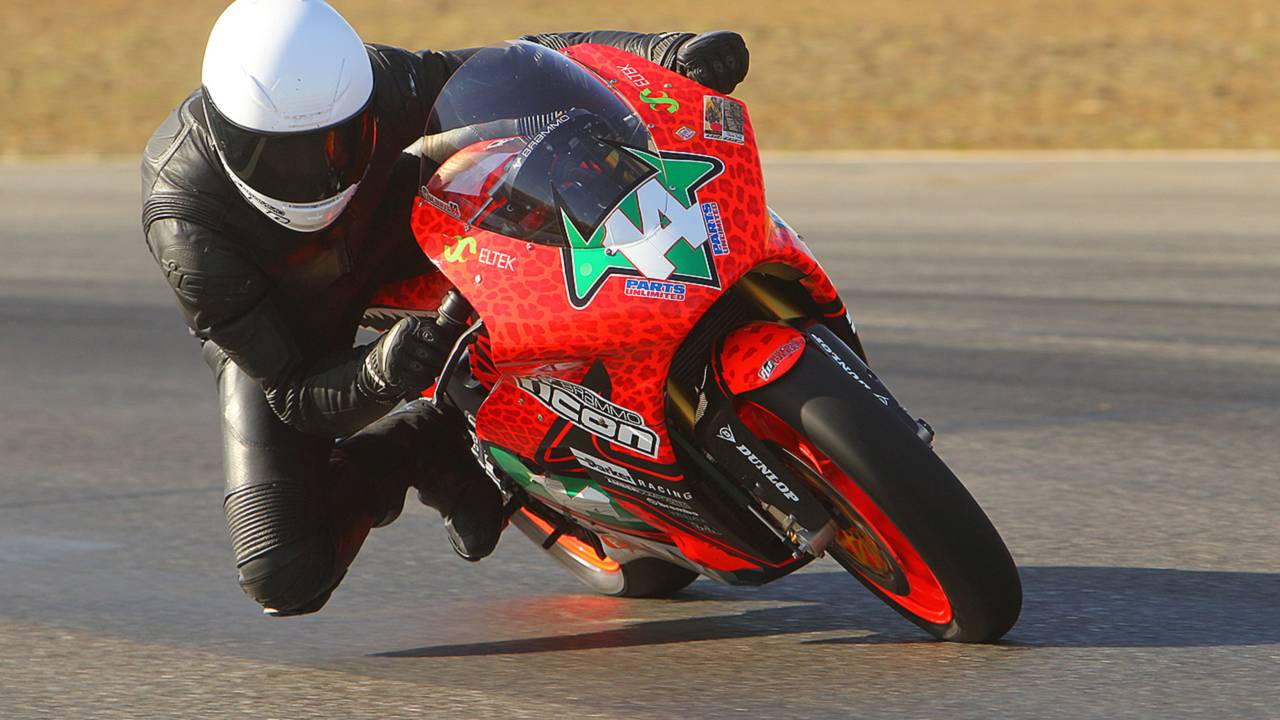 Not pictured: expression of terror.

The graphics! Penned by sponsor Icon’s design team, this “Sauvetage” version was inspired by the Luftwaffe’s desert camo during WWII and the shark teeth are straight off a P-51 Mustang. That makes no sense, but it works.

The performance is just staggering. I raved for days about putting 100-foot gaps on Panigale’s on Thunderhill’s half-mile straight. Nobody believed me, but they haven’t ridden one of these things yet. 166 lb.-ft. available from 0-6,500rpm is just a whole other world.

Losing the reciprocating inertia really does seem to do incredible thing’s to a motorcycle’s handling. No force resists steering, making it faster while also boosting feel.

The lack of vibrations helps with feel too. No longer is the only thing coming through the bars and seat “POWER!” Instead, it’s “GRIP!” and “BITE!” and “SQUAT!” and “DIVE!” and that’s just revelatory.

And the rest is pure race bike: stunning brakes, perfect suspension, slick tires. Can’t beat any of it. 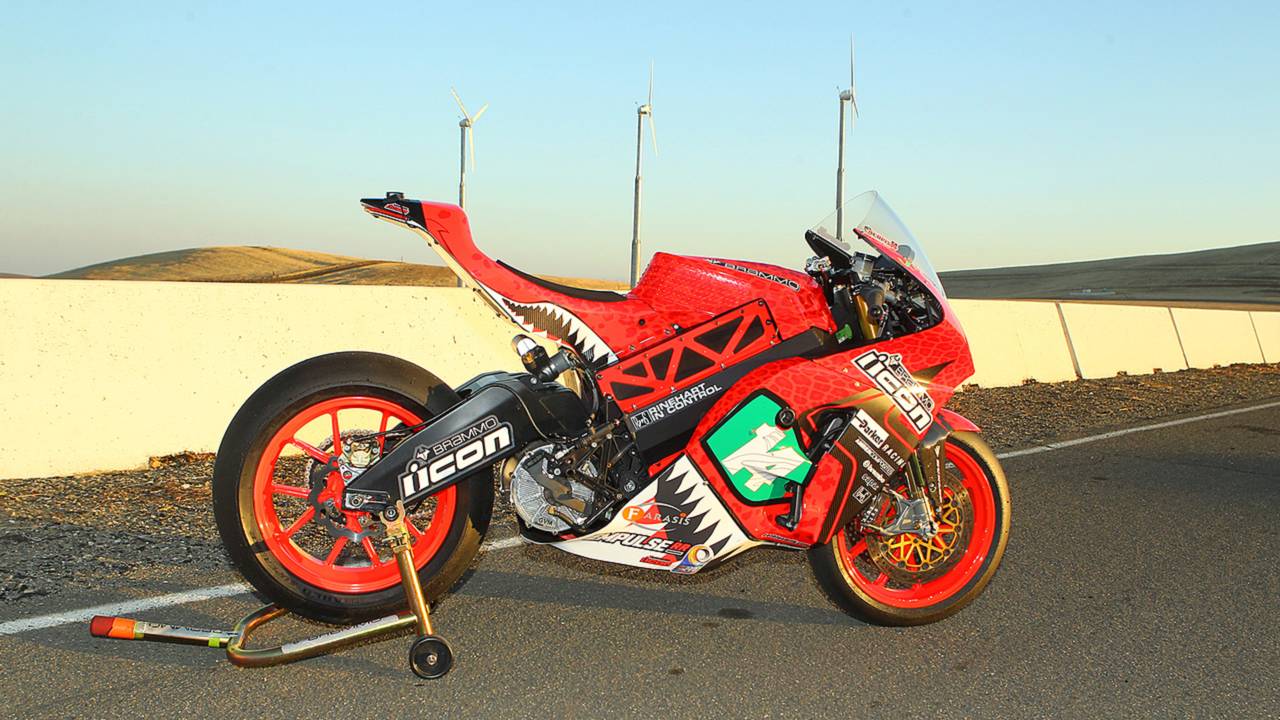 Very few dead dinosaurs burned in the creation of this review.

Unlike more production-ready rivals — think Mission RS — traction control isn’t seamlessly integrated into the electric motor. Brian described it to me as, “the save your ass type” and encouraged me not to find myself in a situation where I needed it. I didn’t.

No matter how fast and friendly a bike gets, it still won’t make you a fast rider. Eric passed me on the inside of a corner, on a Ninja 250, while waving.

Range is obviously the biggest downside though. Electric bikes continue to struggle with consumer acceptance because of it and five laps just isn’t…good. 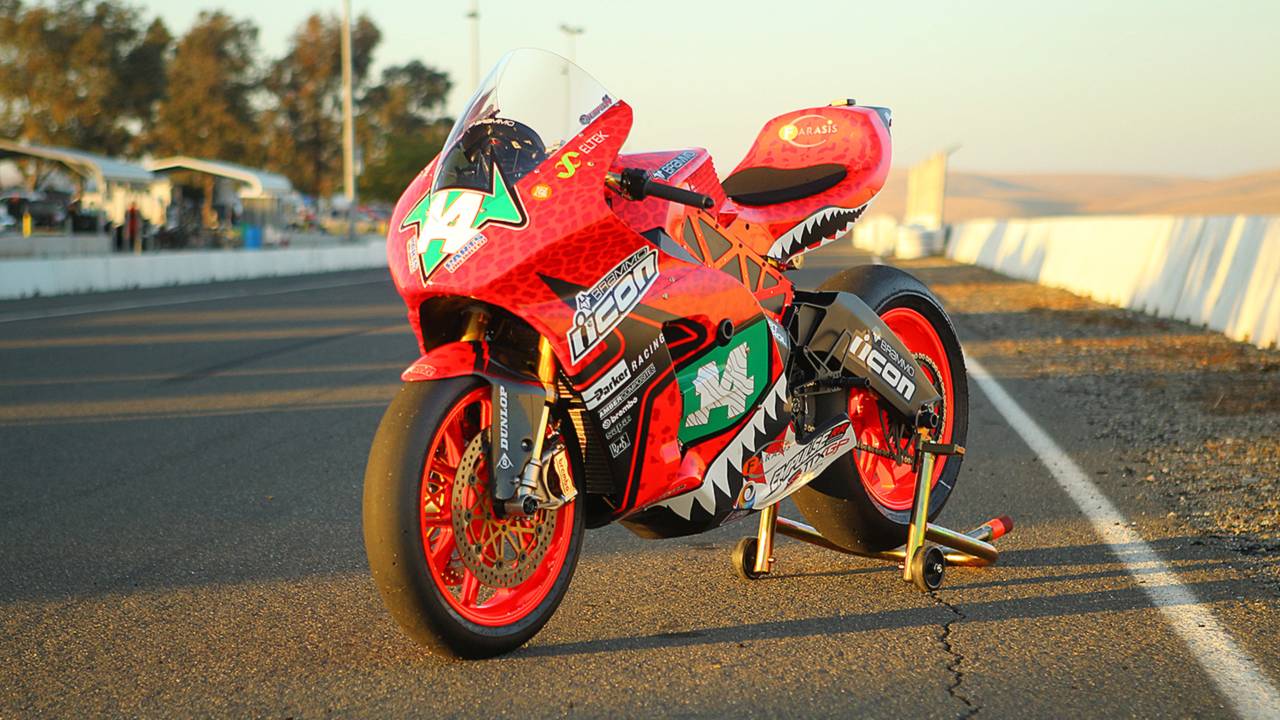 Not exactly subtle, is it? The Empulse RR drew crowds of onlookers and many instances of "Gee mister, can I have a go?" The answer was always "no," even for Joey Pascarella.

The Empulse RR is a prototype factory race bike. Its value lies not in its components, but in the R&D and man-hours that have gone into making and racing it. Still, had I binned it, Brammo would have been out a dollar figure with many zeros behind it. 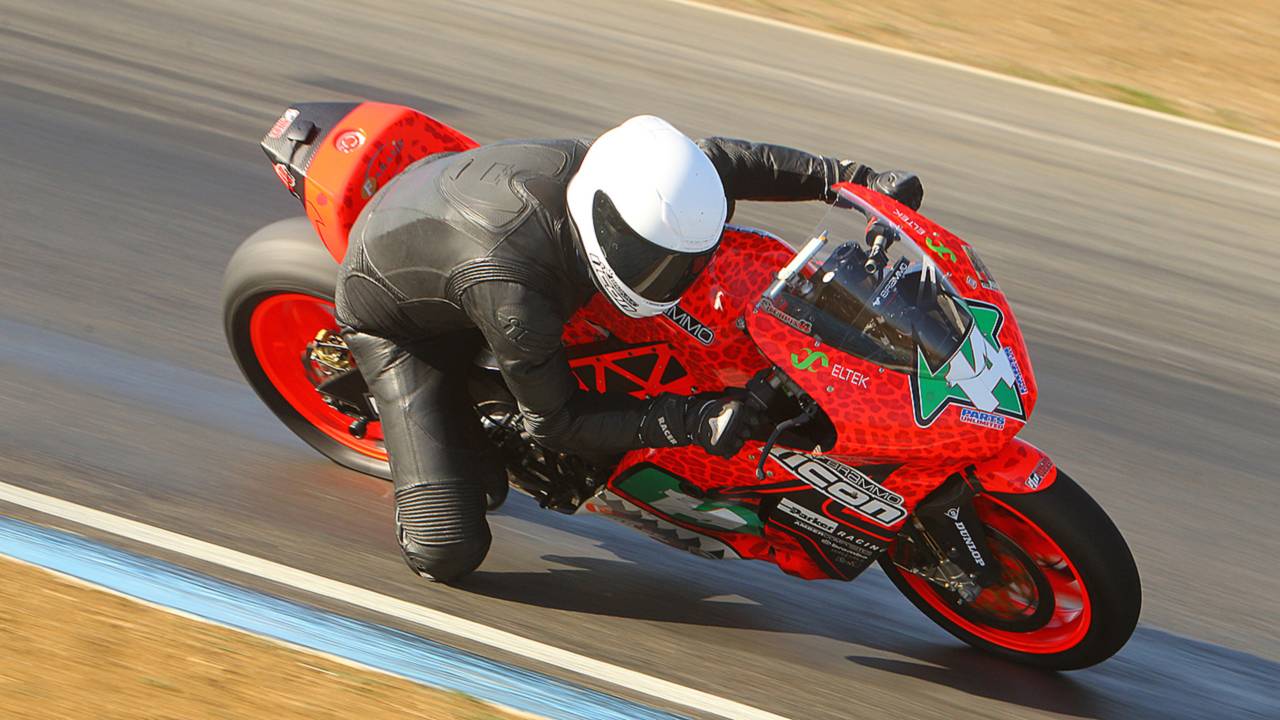 You and I are lucky people to be living in an era where motorcycle performance is being completely redefined. And right now, it’s the Empulse RR writing that definition. Gives these guys a budget equal to that of a factory race team in World SBK or MotoGP and they’d have no problem competing and likely winning. Electricity is that superior a power source. As it stands, the Empulse RR is a stunning peek into the future of fast motorcycles.

Leathers: Custom Icon One-Piece (N/A, but you want one)