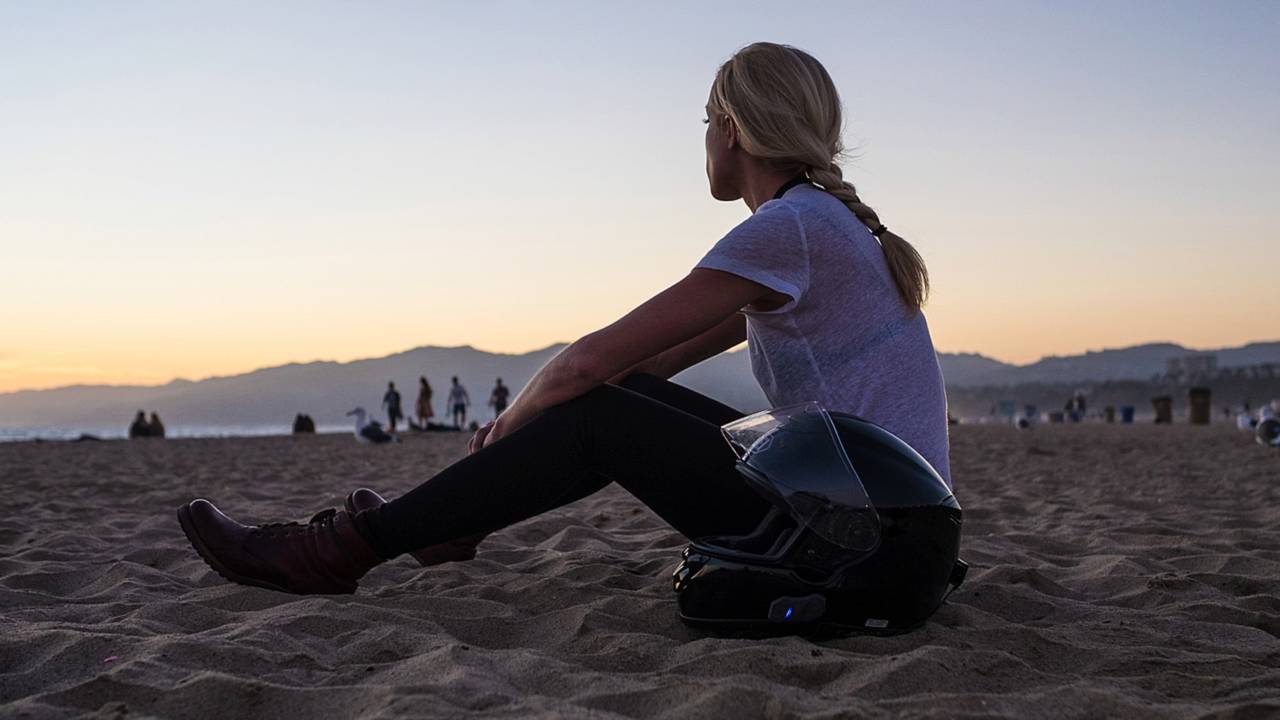 Are you looking to be famous on YouTube? Have some crazy lane-splitting skills? Hoping to catch that brutal 10-car pile up? Well, the Sena 10C might be for you.

Are you looking to be famous on YouTube? Have some crazy lane-splitting skills? Hoping to catch that brutal 10-car pile up? Well, the Sena 10C might be for you.

Earlier this year, RideApart looked at the Sena 10C intercom, which has the ability to take videos and photos. I must say, I was interested. So I screwed one on to my helmet, stuck a Sena SMH10R on a friend's, and rode across the country. We used the intercoms everyday for two weeks. Here’s what I found out:

The many pieces of the Sena 10C.

What a mess! There are a zillion parts and the instructions are in what seems like 100 languages. The one in English is near useless, and if you’re like me and like to know all the unnecessary details, you’ll need to download the full PDF manual.

The 10C has a mount that screws onto your helmet, and there are intuitive adjustments to level the camera. But since there's no way to get a live feed from the camera, you’ll need to put your helmet on, take a photo, take the SD card out, load that on to your computer, have a look, then repeat. Not fun.

Unlike other intercoms, the 10C headset has detachable wires for the microphone and both earpieces. This allows you to choose which microphone you want to use. It comes with a small mic and a boom mic. (You’re left to choose which you want. The manual is silent on the pros and cons.) Even though RideApart's previous article mentioned that the boom mic is superior, I had no issues with the regular one. This would make replacing, or possibly upgrading, the earpieces an option too. The downside to this is there are many wires and tiny connectors. Despite my best efforts, I couldn’t get them all to fit nicely in my XL Shoei. I found the cable for the right earpiece too short, and alternatively, the mic cable was excessively long. The connectors on the wires are also extremely delicate, so if you’ve got a smaller helmet, electrical tape, and patience you should be okay.

The SMH10R, the intercom-only unit, uses adhesive pads to stick to your helmet. It seems messy and less secure, but they held up on our trip fine. It requires you to stick the intercom on the side of your helmet, then stick a bulky battery pack on to the back of your helmet. You then run fragile wires between them, one of which arrived broken and required a replacement.

Overall, installation and documentation are poor.

The Sena 10C shown with the included microphone options.

Using the 10C intercom—playing music, advancing tracks, adjusting sound, and sharing music over the intercom—is a snap. No one does this better than Sena. To take a photo you first press two buttons to turn the camera on. Once it’s on, you press a single button to take a photo.The headset will make a shutter sound when the photo is taken.  In most cases, I could hear the camera being turned on and the shutter noise. The system relies on being able to hear the sounds which, at highway speeds, is not always the case. At times I thought I had been taking photos only to realize later the camera wasn't on.

The SMH10R comes with an additional handlebar remote, which oddly doesn’t work with the more expensive 10C. It would be nice if you were able to take photos with the remote and see a light flash to confirm the photo, which would also be easier and more fun. Fussing to turn the camera on, then clicking your head to take a photo isn’t a great user experience.

A remote would also make the video tagging feature an even better idea and more accessible. Once turned on, the camera constantly records. If you decide you want to save something, you turn video tagging recording on and it saves the last 60 seconds and the next 120 seconds. Fantastic. Although to do this you need to need to hold the camera button first for three seconds, then for one second, and then again for three seconds if you want to turn it off...while riding a motorcycle (good luck). Even with two weeks of practice, I couldn’t reliably get this to work. With some interface tweaks this could be an amazing function, but I found it too complicated to reasonably use.

Four pieces connect to the Sena SMH10R: two earpieces, a microphone and a battery pack.

The intercom is fantastic. It’s simple to pair, the sound quality is shockingly good, and it’s straightforward to use. It’s easy to toggle between listening to music and using the intercom. You can also share music—a feature that we ended up using quite a bit. Music sound quality is acceptable. This is where Sena shines.

If you don’t use the camera, the battery will last all day. You can turn the intercom on in the morning and forget about it until you recharge it a night. If you use the camera, battery life is an issue. Another brilliant feature, which I benefited from everyday, is that the camera will be forced off once you’re down to two hours of intercom battery life. The plus side to this is that it gives you a two-hour “reserve” battery. The downside is that it normally happened to me by lunch. The battery life isn’t long enough to shoot photos and video all day. I got into the habit of charging it at lunch breaks, and even then it would die before I reached my destination. It’s not a great solution for touring, but would be fine for shorter rides.

I rode through rainstorms and 100 degree heat and both units functioned fine. Perhaps it was just my luck, but the camera seemed to be a bug magnet, and if I forgot to clean it regularly I would often get home to a 100 photos of blurry dead bug close ups. If you do keep a clear lens the other issue is image quality. The GoPro and iPhone have defined the standards for quality and ease of use. Anything less will be disappointing. Say you happened to catch a sweet photo. The first thing you’ll want to do is share it, right? Well, unfortunately there’s no easy way to do it. Unlike the GoPro, which you can access via a Bluetooth phone, you need to pop the MicroSD card out, put it in a tiny adapter, then transfer that to your computer. I imagine most of what riders will want to do is share their images online.

If the 10C is truly going to be revolutionary it needs to simplify getting the media onto your phone and improve the image quality. The lackluster quality of the photos is also true of the video: You can record good quality audio while recording video. If this is what you’re looking for, the Sena 10C does just that.

Photo taken with the Sena10C.

I recommend both of these units for their fantastic intercoms. If budget isn't an issue, it would be fun knowing you always have the option to snap some low quality photos with the 10R. The saying, “the best camera is the one you always have with you,” comes to mind. But if capturing great quality videos and photos is a priority, then you’ll want to stick with your GoPro.