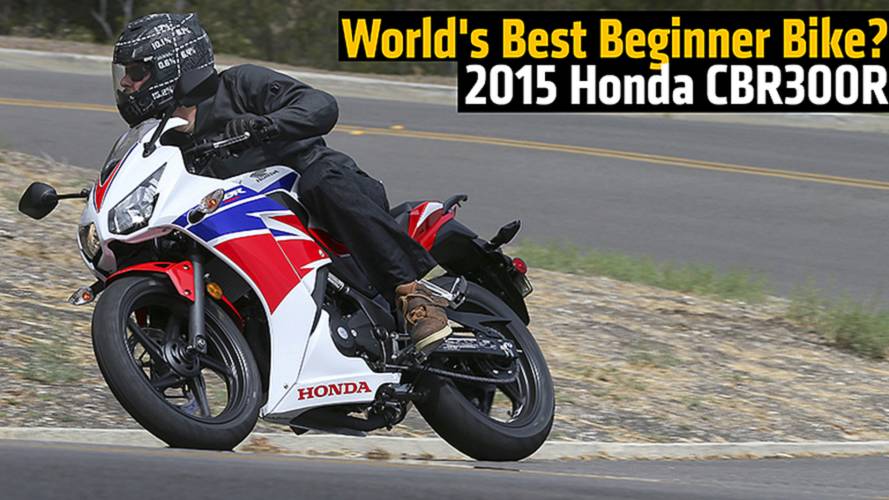 A bold statement, but one we stand by.

Let’s get this out of the way: the 2015 Honda CBR300R might just be the world’s best starter bike... well, maybe; maybe, not. It’s probably more accurate to say it’s the best beginner sport bike, but nevertheless, commenters have at it!

Used bikes are always good for beginners, but this bike, even in its previous 250cc designation, has been long hailed as a great bike for anyone learning to ride.

Maybe the CBR300F - the forthcoming naked version - would be a better beginner bike? (Skip down to The Verdict to read about the CB300F)

There are a zillion factors that play into making a great beginner bike. There’s the obvious - low seat height, skinny, lightweight, easy clutch and small displacement, but there’s also factors that many don’t consider: having the ability to grow into the bike, the right gearing, seating position, cheap, etc. The CBR300R is close to being one of the best beginner bikes on the market. Experienced or newbies alike can have big fun on its tiny chassis.

You might think the 300 would be a bigger bike, a slow step in evolution that would lead to Big Red essentially creating no more new beginner models, but it’s really a better fitting and riding 250 with a little just a little more oomph.

Honda touts the CBR300R as an all-new model, but realistically it’s an updated (and replacement for) the CBR250. The 300cc engine is far more than just a stroked 250, however, as Honda had to develop a new wrist pin, rod and counterbalanced crankshaft. The added stroke changed the torque curve so Honda redesigned cams to compensate, bringing the torque curve back to where they wanted it.

Regarding the bike’s size, it’s essentially the same seat height as the CBR250 (less than .5 inch taller) but the fairings have been reworked for a thinner profile, making it easier to grip with your thighs and bring your feet closer to each other to hold yourself up better at a stoplight. So, while the seat height is the same, it feels noticeably easier to hold up and more nimble than the 250. Also, the skinnier frame wasn’t more or less comfortable for my 6’3” frame.

Our ride started off at the Honda facility in Torrance, California. The size of a small town, the Honda America headquarters is a massive site. We started with a short video presentation in the motorcycle garage then checked out the CBR300R, alongside last year’s CBR250R. From 20 feet away, there aren’t major differences, other than some reworked fairings, but once you jump on both bikes you can immediately tell that Honda spend time developing the CBR300R.

Six of us jumped on our bikes followed by Honda employees on various, larger CC bikes. It became obvious they were on bigger bikes as I was screaming through the gears and looked over to see one of the Honda guys leisurely roll on the throttle.

We headed for some quick photo stops through the hills of Palos Verdes, California, a rarely talked about, hidden piece of land north of Long Beach, but south of Redondo Beach. It was the perfect area to ride, close to Honda’s facility, with a mix of twisties, up and down roads that touched the water and urban riding. We skipped between cars for a few miles until we landed against the water.

The bike encourages you to take it through the rev range. We were grabbing gobs of throttle at every light and the thumping single cylinder had a fun torque curve. The bike was calm and collected as I twisted hard on the throttle. It pulled through most of the rpms with jolt of power right off the clutch; the CBR300R had plenty of down-low torque to get me through city streets and skip between cars, but honestly, not a lot more than that.

The CBR300R has a lot more color options than the CB300F

When was the last time you went 100mph? There are plenty of motorcycles that are terrible to ride on the highway that’ll do over 100mph; uncomfortable with horrible gearing that results in high rpms at highway speed. The CBR300R had none of that... and it probably won’t do 100mph.

The gearing was spot on perfect. The transmission was tall, making for comfortable 60-70mph speeds and the engine had enough torque to have fun at the stop light. This combination brought the little thumper to its fullest potential. I don’t think you can squeeze anymore out of that engine.

There are a lot of things that are bad about a small-cc, single-cylinder thumper, but Honda made huge engineering improvements to avoid as many inherent problems as possible. The sound and power output were the only things reminding me that I was on a thumper.

I believed it was slightly better gearing than even the Yamaha SR400, which of course, has 100cc on the Honda.

We liked the retro color scheme.

The little frame made you want to ride the bike like a dirt bike. According to Honda, the front suspension is around 4.65-inches, slightly more than bigger 600cc and 1000cc CBRs, but it feels softer than that.

They call it a 300, but that’s really an exaggeration, it’s a stroked 250 to 286cc. But, there is a new piston-pin position, rod and crank. Honda has never officially announced power numbers, but the team does admit the power curve is different and things like cam profiles were changed to help smooth out the torque curve. Luckily, it’s not just a stroked 250cc.

The bike was nimble and overall a good performer. Anyone can jump on this bike and have a blast. You ride every weekend, but your girlfriend or newbie rider friend wants this bike? Encourage them to hop on a CBR300R and then ride it when they aren’t. A new rider or even an experienced rider will have plenty of room to play with before reaching the bikes potential and outgrowing it.

On the highway, while the rpms are good-enough for a single cylinder, the bike is a little twitchy and the loose steering and nimbleness are a problem. You definitely wouldn’t want to go longer than 30 miles on a fast freeway. The aerodynamics and small tires did not aspire confidence for highway speeds. The seating position was kind of uncomfortable as it's a mini version of a sportbike. So, you’re still up on the front wheel, unlike the CB300F which has legit handlebars.

Overall nothing on this bike exceeds or overpowers any other part of it. It’s an inexpensive bike and therefore everything is on the same playing field. The suspension is soft and can be sketchy entering a corner too fast. The steering a little loose and the brakes have an older, slushy pedal, but overall the bike had that early-trail-bike feel with soft levers and suspension.

This is a fun motorcycle for anyone--no matter the experience level. Watching a bunch of seasoned journalists jumping and swerving around was a blast. I’m teaching my girlfriend to ride and want her to buy this bike, not for her, but for me. It’s the type of bike you can jump on for an afternoon and have fun slinging it into corners. It’s a small-cc thumper, but Honda worked hard to bring it to its fullest potential with power.

You will eventually outgrow it and get tired of being outrun by your buddies, but not right away. If you live in the country and surrounded by nothing but highways, than yes, you probably need something bigger, but for urban riding, you may never outgrow it.

The CB300F unfortunately was in short supply, so we weren’t able to ride it, merely sit on it. I believe for a beginner this is a better bike. The dirt-bike bars and pegs build better confidence in an inexperienced rider. The traditional sport bike riding position - up on top of the front tire, seemingly forward of the bike - could possibly be intimidating for a first-timer. Even though the standard 300 doesn’t present nearly as experienced of a stance as a CBR1000 or GSXR, it’s still inherently jarring for a newbie.

For a brand new motorcycle, this is a fair and borderline cheap price for what you’re getting, at $4,399 and ABS adds $500. If it were cheaper, it would be a better starter bike, that’s why the CB300F might still be better. No fairings and starting at $3,999, but there’s no option for ABS and limited paint options on the CB300F