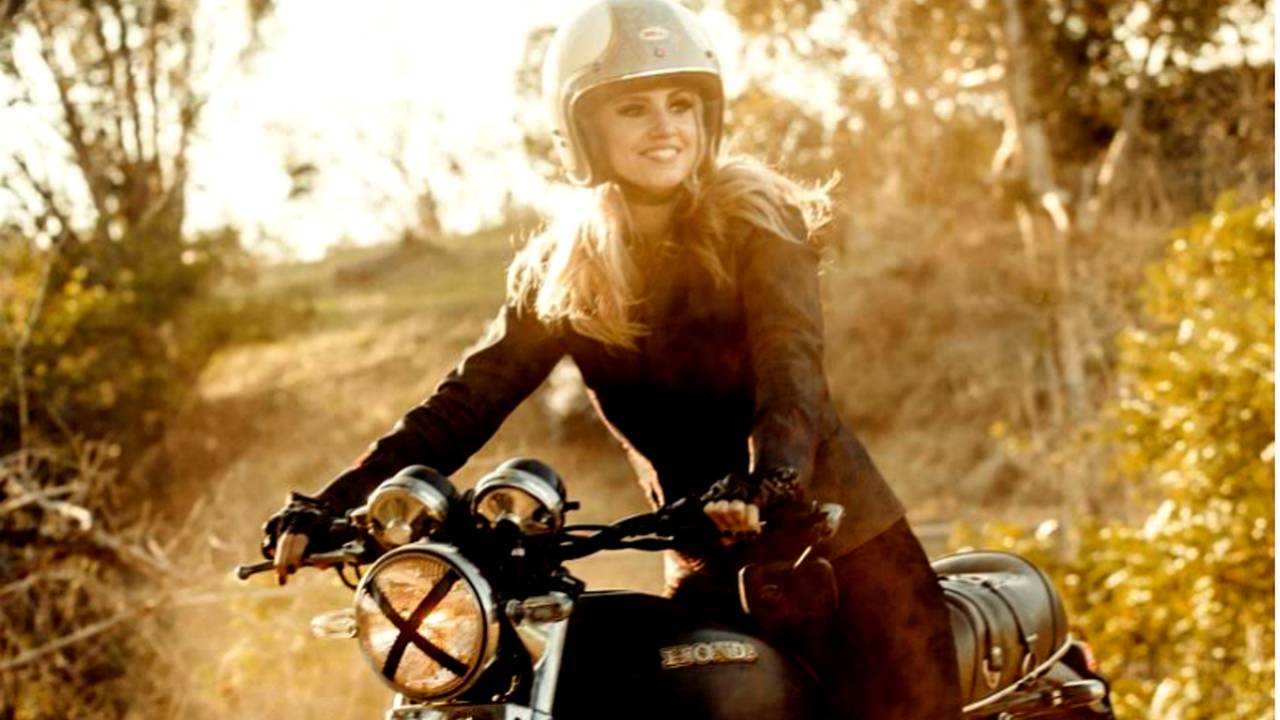 I caught up with my motorcycle friend Ginger Damon to discuss her Los Angeles-based company, Gigi Montrose Moto Couture, which produces a line of women’s motorcycle apparel that's proudly made in the USA.

The story of Gigi Montrose’s launch is also the story of how Ginger followed her instincts to seek even greater fulfillment in an already accomplished life. After working many years in the film industry doing hair and makeup, she began to feel nudged towards a new focus. One such nudge occurred while watching a stuntwoman skillfully maneuver a motorcycle in dangerous scenes. This roused Ginger enough to receive a riding lesson from the stuntwoman in the back parking lot. It takes but a moment to put a leg over a motorcycle and ride it around in circles for someone to be smitten with the inclination to ride or not.

It's much like romantic love: You either feel the chemistry enough to be committed to learning the new skills required to build a healthy romance, or choose to establish a platonic friendship from afar in the safety of text messages and the Internet. Both love and motorcycle riding require a hands-on approach, and both can get down right messy and painful if taken beyond the status quo of experience. One doesn't get squeamish when faced with the inevitable vulnerability of high-risk activities. Instead, certain types of people lean into the exposure, feel it all, articulate their feelings and prevail.

Ginger is one of those prevailing individuals. She clearly became smitten in those early introductory moments and began to dream how she could leave her prestigious career life, which often took her far away from home in Los Angeles. Ginger wished to define a new way of living; one closer to home to accommodate her new lifestyle as a woman who rides. She was still years away from even being licensed or owning a bike, yet something had been ignited in her — a long infatuation followed by slowly and cautiously falling in love.

This all unfolded with many starts and stops. Ginger wondered at times if it really was love, fearing the feeling wasn’t going to be reciprocated or perhaps she was wasting her time on folly.

The Birth of Gigi

Starting a business is, of course, high risk in its own right. Two years ago, when Ginger had the concept to create a company for motorcycle apparel, she thought she’d run it by a respected friend to see if it had any legs. As they sat and discussed the idea at a café in Beverly Hills, he quickly dismissed the plan when he heard she wanted to design women’s motorcycle apparel. Almost concurrent with his dubious response, Ginger pointed out a fashionably dressed female rider vroom by them...blonde locks trailed behind in the wind.

She continued defending the idea to her friend as viable. She informed him that more and more motorcycle riders are women of all ages, body-types and backgrounds. Manufacturers are forging more bikes to woo this group of customers and with that influx comes the obvious need for more options in riding gear. Ginger went on persuading. However, the person she most needed to convince was herself— not necessarily her friend who was giving her the hairy eyeball and a very fatherly look of concern.

He needed proof. He needed numbers, facts, and business plans: An investment banker sort of proof. Not instincts, certainly not women’s instincts; certainly not women honing motorcycle riding instincts so sharp it’s no wonder the industry has stood at attention to satisfy us with products that work. He was the kind of detective/naysayer of the business world I personally get thoroughly vexed encountering. But Ginger, having already diligently gathered hordes of supporting evidence, pressed on.

Meanwhile the blonde motorcyclist had vroomed by the café four more times. Her serendipitous timing was enough of a catalyst to turn that left-brained-thinking male right-brained, and he began to see Ginger’s point of view. Isn’t it great when the universe cooperates like that?

Ginger left a note on the motorcycle once it was parked and asked the rider to please call her— it was urgent. She was sure she’d seen an incarnation of her muse Ann-Margaret in that mystery-rider. This woman not only possessed, but brandished qualities Ginger sought to expose through the eventual architecture of her designs: feminine, strong, and protective. A design and life-style philosophy that acknowledged the inner radiance bursting from women, which also embraced our immense value, beauty and power just by our mere existence. Put that creature on a motorcycle and life flourishes exponentially.

A few years ago she had observed her friend preparing to ride his motorcycle. As the bike warms up, he slips into his jacket and zips it carefully, places his helmet on, and lastly his gloves. He pauses as he sits on the seat, as though he has wrapped his body around his lover in reassurance, as any good man should do with frequency. His posture is confident, alert, and sexy. As she tells me this story tears are welling in her eyes. Taking in his grace was the final push she needed to get licensed and buy her Triumph Bonneville T100. Finally, Ginger could ride!

She researched both historical and current trends in female riding apparel for the next two years, experimenting with fabrics and hardware for safety and durability concerns. An important mission began to form, which begged the question, “What is the female rider identity?” Obviously there is not one answer. She initially found a lot of what she didn’t want— she didn’t want to be a brand confining women to having the same aesthetic. She wanted to celebrate our different bodies while offering iconic garments that flatter and protect. With only the two jackets released so far (aptly named Speed and Fearless) that is one tall order, but I believe she nailed. These jackets are gorgeous and each one feels so good on my body.

The important thing is finding what works given the type of riding we do. What Ginger found is a unique set of needs and beliefs that spoke to her primarily as an urban rider on a Triumph cruiser in Los Angeles.

She essentially made two motorcycle jackets that she felt proud to wear herself reflecting her own identity. She happily wishes to share them with you and hopes that you feel that sense of pulchritude as you ride along, knowing this jacket is made from pure love.