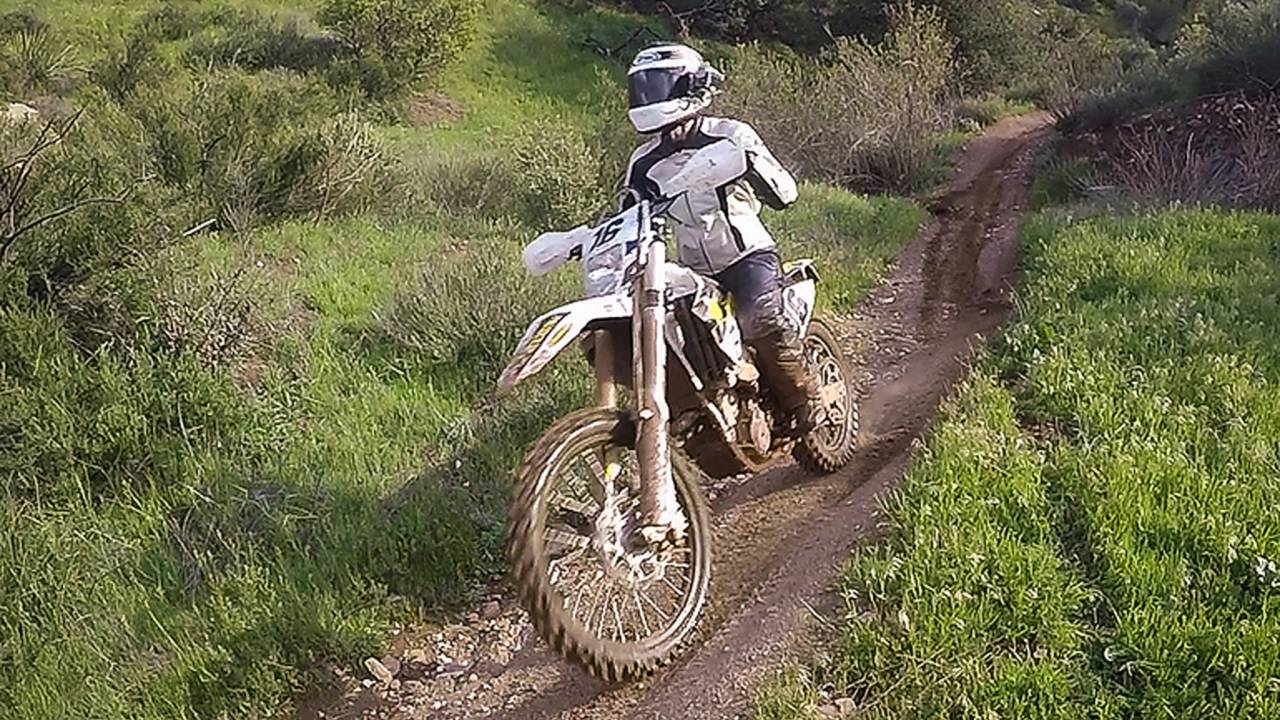 A Day In the Mud Does Any Rider Good — Family Dirt DayI didn’t grow up with any friends or family who rode. If I did, it was kept secret. My parents...

I didn’t grow up with any friends or family who rode. If I did, it was kept secret. My parents knew I wanted to motor around on two wheels and did what they could to keep me “safe” from what they perceived to be two-wheeled death machines. Long story short, I was long overdue for a family dirt day.

As a street rider, born and bred, I’ve always felt like I was doing it backwards. Kids who started in the dirt seemed to have an edge controlling their bikes on the pavement, as if asphalt was “easy mode.” I wanted in on that action. Plus, how cool would it be to ride out in nature?

Family Dirt Day at Rowher Flats OVH presented just that opportunity. All I had to do was show up, gear up, and ride with friends, new and old. On hand were an array of bikes, ranging from little 125cc machines to 450s for the big boys. As a total beginner, I was expecting to start on something small, like maybe the Yamaha TTR125. My first experience riding motorcycles was on an older TTR125, so it seemed like a logical choice. I knew that I could wring the throttle on that thing without getting into too much trouble. Plus, I’d always been told 250s were big in terms of dirt bikes. Yet, as the first group was getting ready to head out, I didn’t give it a second thought when Jim suggested I start on the lowered Husqvarna 250 FE, equipped with a Rekluse clutch. So what if I had to do a balancing act, shifting my weight from one side to another just to get the bike off the kickstand? A hop, skip, and twist of the throttle, and I was off.

Local fast guy, Damian Saavedra, led our group of eight along the main path, showing us lines to cross some of the larger ruts from recent rains. A couple other experienced riders rode mid-pack and sweep, ensuring everyone’s safety. Damian stopped to regroup and brief us on how the bikes would be fine riding over debris and through ruts, so long as we were steady on the throttle. Then he led us up a fire road.

Strewn with rocks, mud, and massive puddles that hardly fit the word’s definition, it was completely different from street riding. The bike skipped and slid underneath me, seeming to skate along the surface without actually losing its line — so long as I stayed loose on the bars and looked where I wanted to go. In spite of its size, the lowered Husqvarna was incredibly comfy, and offered a good amount of power for the pace of our mixed group. By the time we were heading back, mostly downhill, the bike and I were familiar enough to make a few passes, then ride with my speed unfettered as I filtered up through the group. It was a complete confidence booster, to say the least.

My next time out was on a smaller bike: the Honda CRF125. There were half as many of us, and we immediately hit a handful of intermediate single track trails. While I had expected the Honda to be more maneuverable, I didn’t account for the smaller wheel size, which turned rocks into boulders and ruts into ravines. Combined with the effects of recent rains, even portions of the main road could prove problematic if I wasn’t careful with my lines. Still, with the right application, the little Honda had more than enough power to truck along some fairly steep single track, comprised of puddles, mud, bumpy patches of rock, concrete lattices, and loose dirt. Heading back to the staging area, I was skipping along at wide open throttle on the main road, coming to the conclusion that the bike offered tame power delivery and approachable handling, but could probably use bigger wheels for this kind of riding.

I finished out the day on the Husqvarna 350 FE, which was also lowered and equipped with a Rekluse clutch. Again, it was a bigger group. This time Jim led, and we ventured out along another single track trail. It was a blast bombing downhill into turns that quickly swept back into uphill bits, with a nice drop-off to one side. My jacket, pants, boots, and even socks, were already soiled and caked in brown, so I dove through mud puddles without hesitation. It wasn’t like my socks could get any squidgy-er. The bigger wheels felt great on the rough terrain, and the additional power didn’t hurt, even if the bike was larger. I found myself creeping up on the tail of whomever was in front of me, and having to remind myself to chill out. It’s oddly challenging to do so, when obstacles feel better at a certain speed, and you’re moving more slowly than it.

Granted, I was forced to take a break a couple times when a rider two bikes ahead tipped over. Screeching to a halt on a steep uphill, I didn’t have time to plan the stop someplace where my feet could rest on a rock or something. Fortunately, I managed not to drop the bike, even with the Rekluse clutch, which I was warned would slide backwards downhill, or forward, since it’s designed so it won’t stall. That same feature helped when we had to get going again, and most of my focus was on getting the bike upright enough to get on the throttle without dropping it.

Of course, eventually I did drop the bike: On soft, flat sand, when I came to a stop and had nowhere to place my feet. Fortunately, I was able to pick the bike up in under a minute with no difficulty at all. That part was easier than the dance I had to do every time I wanted to get going!

All in all, it was a great experience. Pulling back in as the sun settled low on the horizon, I may have reveled about in my muddy, abused, street gear, hoping for one more ride before darkness fell. Actual dirt gear may be in order before my next outing, but I’d still do it over again in my leathers if the opportunity arose. Needless to say, I’m convinced most everyone could use and enjoy a good approximation of a family dirt day.

Learn more about Sasha and the rest of RideApart's excellent staff here: The RideApart Team