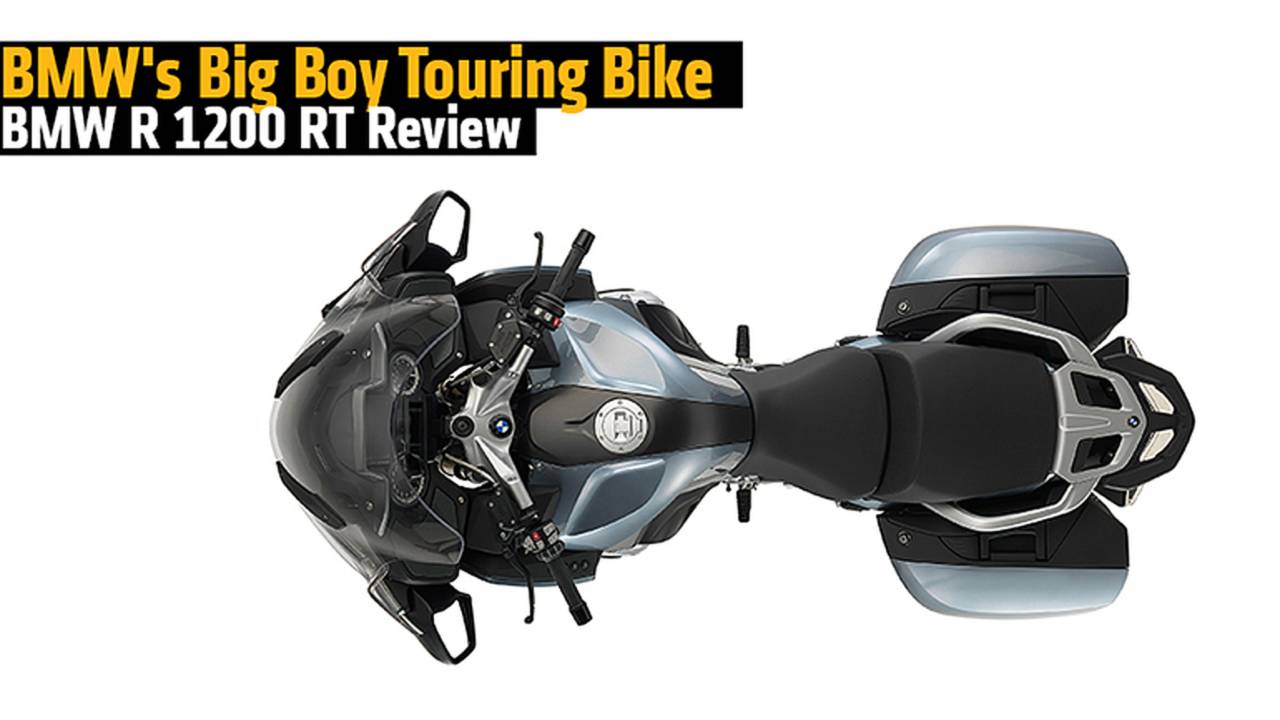 Is the BMW R 1200 RT the comeback sport tourer BMW needs? Jason Fogelson says it's that, and more.

BMW’s been on a quick march lately, updating and upgrading and generally kicking butt. The 2014 R 1200 RT was a rare misstep for the company, as a suspension component caused an immediate “DO NOT RIDE” advisory and eventual recall for the entire production run. BMW was forced to compensate riders for downtime, and even had to buy back some motorcycles from disappointed owners. But the company stood behind its bikes, took care of its owners, and emerged from the potential disaster looking like champs, moving forward despite taking some punches. Which brings us to the 2015 BMW R 1200 RT.

The 2014 R 1200 RT was practically an all-new bike, with a revised frame, a new air/liquid-cooled engine and new semi-active electronic suspension. The 2015 RT returns essentially unchanged from the outgoing model.

I loved riding this bike. I wasn’t sure I would, because I was concerned that the riding position might not be sustainable for me. I’m 6’2” with a 32” inseam, and keeping my knees bent tightly, as in a sportbike crouch, can be uncomfortable after a very short time.

My concerns were unfounded. I could ride this bike across the country tomorrow, and would if I had the chance. The bend in my knees and the footpeg position allowed me to move around on my seat, setting up for turns and moving forward and backward as conditions changed. The handlebars rose to meet me in exactly the right place for an upright, slightly forward posture that was easy to maintain and didn’t put any pressure on my wrists.

I rode the RT all over, from city streets to country lanes, and from packed rush hour freeways to open highways. The bike is maneuverable and easy to handle at low speeds, and fast and stable at highway speeds. My longest ride was a 200-mile jaunt from my home in North Hollywood up to visit family in Los Osos on California’s Central Coast, one of my frequent test ride routes. The RT excelled in all conditions. The bike is a frequent choice for use by the California Highway Patrol, which gave me the side benefit that alert drivers gave way in traffic when they saw me in their mirrors, thinking that I might be CHP.

The RT is smooth, fast and quiet, with nicely managed vibration that rarely intrudes on the rider’s experience. I never felt constrained for lean angle, though I have heard that the protruding boxer engine cases are the first parts to touch down in an extreme situation. I never came close to testing that during my time on the RT, and I probably never would on public roads. Dual disc brakes on the front and a single disc on the rear performed well, even when I was able to activate the ABS system with practice emergency stops.

The RT gets a new 1,170 cc twin-cylinder boxer engine that uses carefully targeted liquid cooling and air cooling. Liquid cooling was necessary to comply with emissions and noise regulations, and it’s seamlessly integrated into the bike. Claimed peak horsepower is 125 and arrives at 7,750 rpm; claimed peak torque is 92 lb-ft at 6,500 rpm. The engine is the same as the one in the highly popular dual sport  BMW R 1200 GS, but with different gearing in its six-speed transmission.

I loved this engine and transmission. Acceleration is always on tap, and the broad torque curve means that shifting can be adjusted to your style of riding that day. On a long highway ride, I would accelerate smoothly to cruising speed, getting into sixth gear as soon as possible. In heavy traffic, I’d hold gears a little longer, keeping the revs up and the bike ready for quick action. On a cruise through the canyons, I let the midrange do the work, staying away from the higher RPMs. The engine was happy no matter what I did, and so was I.

Following a long BMW tradition, the front suspension is a Telelever. The Telelever replaces conventional telescopic forks with a system that uses both forks that attach to a steering head and a trailing link that attaches to the frame. BMW claims that the Telelever arrangement results in reduced dive during braking and greater feedback. Rear suspension is handled by a continuously variable, hydraulically adjustable Paralever single-sided swingarm.

It’s difficult to evaluate the Telelever/Paralever setup in isolation, as it works with the new Dynamic ESA (Electronic Suspension Adjustment) system. Dynamic ESA settings are accessible via controls on the left handlebar and nested menus in the dash. Three ride mode settings are available: Rain, Road and Dynamic – pretty self-explanatory, and they affect suspension, ABS (Antilock Braking System), ASC (Automatic Stability Control) and engine control at the same time. Additionally, damper settings can be fine tuned to “Soft,” “Normal” or “Hard,” and load settings can be adjusted to match one rider, rider plus luggage or rider plus passenger – all without tools, just using the buttons and menus. I found that I played around with these menus at first, but as soon as I discovered the sweet spot (for me it was “Road,” “Normal” and solo rider), I left the settings alone and enjoyed a balanced, well-damped, smooth ride with great road feel.

Electronics are both the strength and weakness of the RT. The left handlebar is a very crowded place, and for me, that spelled trouble. There’s just too much going on there. Two buttons for cruise control, a trigger for the brights, the menu button, the windshield adjustment, the turn signal control and the horn button all crowd onto the bar, and there’s a control wheel between the grip and the button housing. In cold weather gloves, I had difficulty operating individual controls, and I was constantly dialing the control wheel unintentionally, turning up the volume on the audio system. Further complicating operation is the fact that most of the audio controls live on a panel on the left side of the fairing, and it’s difficult to select the right button without looking down. The more I rode, the more familiar I got with the layout and operation, but I still found it distracting and more complex than necessary.

On the plus side, heated grips and a heated seat are standard, and work really well. The pillion gets a separate heating element and control, accessible to the passenger.

Navigation is an option ($799) on the RT, handled by a plug-in unit made for BMW by Garmin. The GPS unit lives under the lip of the fairing, but doesn’t lock in place for security – you have to remember to remove it when you park, or anybody can snatch it and walk away without using tools.

The audio system (part of the $3,200 Premium Package) comes with Bluetooth and front and rear speakers, though I never used it intentionally (only accidentally, by operating the control wheel on the left grip), preferring to link my iPhone directly to my Bluetooth helmet headset.

I wear a 32 inseam (short legs, long torso) and size 14 boots, so I’ve got unique lower body space requirements. I was able to hop on and ride the RT without adjustment, and I was quite comfortable. The same went for the handlebars, which have a limited amount of adjustability thanks to their design. The aftermarket can supply ways to adjust the footpeg position for more room or more crouch, and there are also adjustable bars and risers around for the RT. I wouldn’t require either, nor would I mess with the seat right away.

I was rather disappointed with the switchgear on the bike, especially the crowded left side of the handlebars. Activating the turn signals never really inspired much confidence, requiring a glance at the dash every time to make sure that the switch really operated. As mentioned above, the control wheel is poorly placed, and the whole audio control system needs to be rethought to be more rider friendly.

The 2015 BMW R 1200 RT starts at $17,705 including ABS. The Premium Package adds $3,200, and includes many of the tech features mentioned in this article, like Dynamic ESA, GPS Preparation, Cruise Control, Heated Seat, Audio System, Bluetooth, and others.

The BMW R 1200 RT is expensive, and it has some fiddly issues. That said, it’s still the best supersport touring bike on the market today. Measure it against the Kawasaki Concours 14 ABS, the Yamaha FJR1300ES, the Honda ST1300 and the Triumph Trophy SE ABS, and see if you don’t agree. The others may trump the BMW when it comes to price and value, but the BMW scores in terms of riding experience, overall quality and technological innovation. Strong resale value for RT bikes makes the recommendation a little easier.

If you’re interested in riding long distances quickly, either one-up or with a passenger, it’s hard to imagine a better bike than the BMW R 1200 RT.