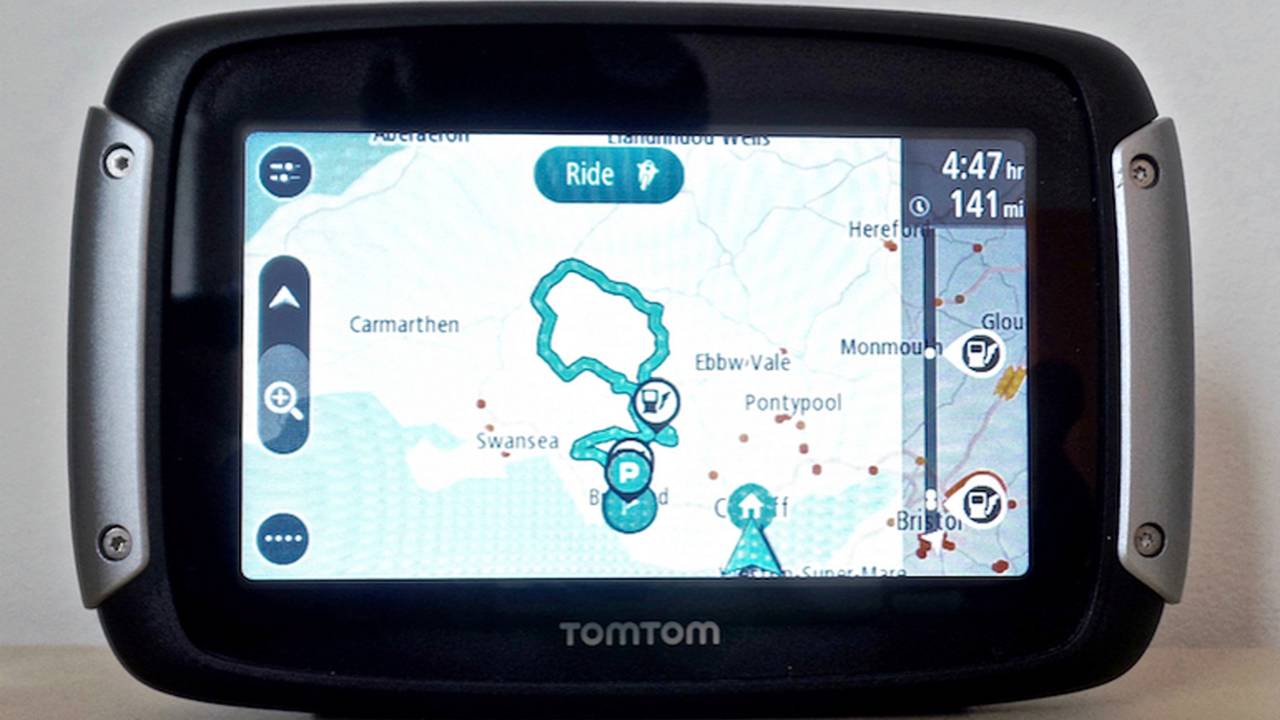 TomTom Rider — Gear ReviewThe first thing to get out of the way in reviewing the TomTom Rider is to determine exactly which device we're talking...

The first thing to get out of the way in reviewing the TomTom Rider is to determine exactly which device we're talking about, since it goes by different names.

The Rider 40, Rider 400 and Rider 410 are all the same device in terms of hardware and functionality, the numerical differences identify the maps offered.

Either way, TomTom promises "lifetime" updates for the maps, which is a dubious claim because TomTom isn't very specific as to what it means by the word "lifetime." It's not your lifetime, nor even the lifetime of the physical device. Instead, "lifetime" roughly translates to: "as long as we feel like it." Or, in TomTom's words, "the period of time that TomTom continues to support your device."

How long is that period of time? Dunno. Maybe a year, maybe 10 years, maybe a week. There's no clear information that might make you feel better about paying so much for a product that does something your phone does.

That said, I prefer a motorcycle-specific GPS to a phone for a number of reasons. Firstly, because I like to go places that aren't in cell range. Shortly before buying the Rider last year, I tried mounting my LG G4 to my bike and using Google Maps. The phone got confused pretty much as soon as I left the city, went hot, then gave up and shut itself off.

Additionally, phones aren't weatherproof, nor necessarily designed to tolerate the vibration they're subjected to when mounted on a bike. Lack of weatherproofing is also the reason I chose the Rider over a less expensive car GPS; it's impossible to escape the rain in Britain. If you live somewhere dry, a car GPS may work for you.

Perhaps to discourage fair-weather riders from doing such a thing, TomTom offers a handful of features unique to the Rider for motorcyclists. Most notably, there's the clumsily named "Plan A Thrill" feature. It lets you arrive at a destination via the most interesting route available. You can even choose different levels of hilliness and twistiness.

I've found the feature to be generally disappointing. For example, asking it to navigate from my house to the headquarters of Brecon Beacons National Park, about 40 miles away, I am given a route that takes upward of three hours and wends through every urban center in the space between. It's twisty, yes, but hardly thrilling.

More useful, though, is the real-time traffic feature. Pairing with your phone, the Rider can alert you to delays up ahead, give you an idea of how long those delays are and will occasionally reroute you. Note my use of the word "occasionally," sometimes I feel it's too willing to put me in traffic.

Nonetheless, it's one of my favorite features. If nothing else, it gives me a sense of how long the traffic is going to last, with the status bar indicating how long I'll be delayed and how far I am from the incident that's delaying me.

The Rider attaches on handlebars or accessory bar via RAM mount. I made a redneck accessory bar for my Suzuki V-Strom 1000 using plastic tubing and a shower curtain rail — it's hilariously ugly — but I've attached the Rider to the handlebars of bikes I've tested for RideApart and found I'm usually able to put the screen in or near my line of sight.

You can take the boy out of Texas, but you can't take the Texas out of his bike mods.

The mounting base can be wired to the bike's battery to ensure the device stays charged. If you're unwilling to mess with wiring, my experience is that it will last more than five hours on a charge.

Timing it, the Rider takes a full minute to boot up. Once awake, it's easy enough to use. The menu is simple though not immensely intuitive. A recent software update has helped things a little in allowing you to choose where icons are placed.

The touchscreen keys work most of the time, but you haven't got a snowball's chance in hell of pressing them if you're wearing winter gloves. Even summer gloves can be too much for smaller keys. Meanwhile, I've had the touchscreen get confused by heavy rain.

Related to the above, the system of sub menus can be annoying. For example, in the main menu there is an option that says "Gas Station." Think about what you'd want from that option. The nearest gas station, right?

Instead, you're presented with a map too large to be of use. You have to click and zoom in on the map to see how close stations actually are to you, or you need to click to a list view and select a station that way. You have to click again to choose a station, and again to set a route, and again to initiate that route. All this clicking is too involved to be done on the move, usually needs to be done gloveless, and fails to understand the urgency inherent in a person's having chosen the "Gas Station" option in the first place.

The Rider's map display is a strength over similar GPS devices. It's clear and accurate. The arrow indicating position never lags. At key points, such as motorway exits, the map will automatically zoom, telling me which lane I need to be in.

The screen is bright and easy to read even in bright sunlight, and switches automatically to a less retina-burning night view once sunset hits.

You can choose to display the map in horizontal or portrait view simply by turning the device (the Rider's base allows you to click between positions with minimal effort). I prefer the horizontal view because it offers a status bar that shows distance left to my destination, estimated time of arrival, and indicates key points of interest—.e.g, traffic congestion, rest areas or gas stations — that I will encounter ahead.

The device also alerts me to the presence of speed cameras, stoplight cameras and high-accident areas.

My primary use for the TomTom Rider is getting from point A to point B. This is a simple process of searching a location or address, selecting it and initiating the route. Most of the time this works. However, in Italy I learned that the way Italians write their addresses is not the way TomTom thinks they should be written.

An annoying quirk of the Rider is that it will initially tell you the distance to a destination as the crow flies. It's only when you actually initiate the route that you learn how many miles you'll be riding.

You can also set a location by painstakingly dragging the map, zooming it in and out, and clicking on a specific point. I tried this once; it was so frustrating and awkward I almost threw the device off a cliff.

You can choose a number of options in how the route is determined, e.g., fastest route, shortest route, most eco-friendly route, windiest route, etc. You can also choose to avoid highways and tolls and so on, but it's not possible to set an upper speed limit. Older car TomToms had that feature, and I think it would make sense on the Rider; imagine the naked cruiser who'd like to avoid the turbulence that comes from riding above 60 mph.

When it comes to more involved route planning, the Rider offers a "lifetime" subscription to Tyre Pro, an interactive route-planning software that doesn't interact with Apple products. So, I've never used it. TomTom's MyDrive website allows you to plan a route with multiple destinations, but you can't specify roads. It's also a glitchy process that only seems to work on 1 out of 5 attempts.

The good news is the Rider has no problem accepting GPX files. Which is to say, once you work out the circuitous process of downloading GPX files onto the device it has no problem using them. So, if someone else creates a route for you, or you're lucky enough to be going someplace recommended by Ride magazine, everything is peachy.

The Rider is generally pretty quick to serve up alternative routes if you miss a turn or decide you don't like the look of something (perhaps the road is flooded or, as happened to me in Mid-Wales recently, occupied by a wedding party on tractors). The chances are 50/50, though, that the recalculation will either desperately try to put you back on the exact same route, or run you 30 miles in the opposite direction up an unpaved mountain pass –– I've been subjected to both scenarios.

That said, alternative routes as a result of live traffic information are suggested a little late in my opinion. On the motorway, an alternative route will be suggested only half a mile from the necessary exit. Which means scrambling to get into the right lane in a relatively short space of time.

The system is better than it used to be, though. When I first bought it, a message would ask if I wanted to take the alternative route that I had to click to accept. See above about the Rider's functionality when wearing thick gloves. Now, the potentially new route is simply displayed in flashing green and the status bar indicates how much time the GPS thinks you'll save; no need to touch the screen, just follow the route or ignore it.

The Rider offers Bluetooth pairing, so you can hear the GPS instructions if you have a headset. I don't have such a device; there are already too many voices in my head. And I have concerns as to how well it would work.

The GPS also uses Bluetooth to pair to my phone for traffic updates and I know it struggles to maintain connection. I have heard from someone with a Sena SMH10 that the same thing happens with his headset: it connects and disconnects constantly.

Apparently you can set up the Rider to serve as a kind of interloper between your phone and headset, so that when you receive a call you'll see it on the screen and can press a key to accept the call. I'm not sure I get the point of this. See again what I said about functionality when wearing thick gloves. Plus, Bluetooth headsets are designed to allow you to answer calls pretty easily anyway.

If you haven't guessed, my overall opinion is that the Rider isn't worth the money that TomTom asks for it. At the same time, however, I still think it's a device worth owning. I'm not aware of a better motorcycle GPS, and ultimately I find the Rider to be incredibly useful.

That is primarily because of the increased sense of freedom it gives me. One of my favorite things to do is head out with no particular destination in mind, allow myself to get completely and utterly lost, then click on the Rider and allow it to guide me home.

That provides a psychological safety blanket that has made me far more adventurous and daring than I am naturally inclined to be. I've so far felt free to wander in nine different countries with this little device always there to help me out.