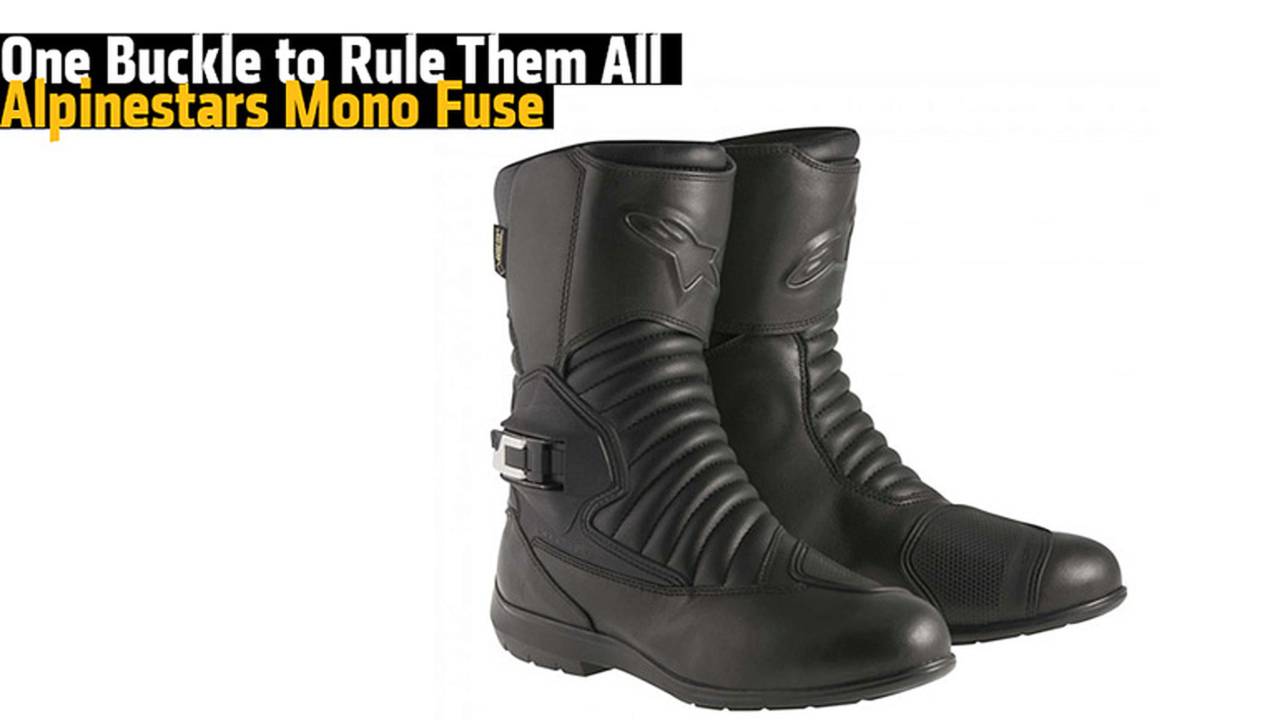 Alpinestars Mono Fuse boots use a single buckle closer to replace all those pesky and bulky setups on other boots.

Boots are boots right? There isn't a lot of innovation going on in footwear these days. Retro, racer, touring, and boring is the norm; however, Alpinestars seeks a different path with their new boots called the Mono Fuse.

If you were to see these on the shelf you might not give them a second look. But I encourage you to reconsider. The Mono Fuse name stands for the single ratcheted strap with a buckle, which wraps around the back of the boot instead of the front. Ever have discomfort around your ankle or the top of your foot from the buckles digging into the skin? You won't with these. The Mono Fuse offers comfortable, uninterrupted ankle protection that also flexes better compared to other boots.

Overall, brilliantly. The upper part of the boot is a traditional velcro adjustable strap, which makes the boot easy to get on and off. The wrap around is large and helps make the top of the boot maintain the waterproof seal a little longer than it would've otherwise. There's nothing worse than water running into the top of your boot...well, maybe water running into the crotch of your pants... but you get the idea. The ratcheting buckle is just above the ankle on the back and uses a trick lever to release the strap. The process is so simple you wonder why it took this long to implement.

READ MORE: The 10 Sexiest Motorcycles of the Decade

However, there's a minor nit-picky item to mention about the Mono Fuse. The buckle doesn't allow you to get the boot on tight enough if you're in between sizes. The leather is supple, but it's eventually too much for the mechanism to overcome and it will only get so tight before it simply stops. The more traditional buckles on my other boots are more robust and can ratchet tighter than you would ever need. It's a minor complaint and could be easily addressed in a revision.

Considering they have the same basic features (premium leather, ankle protection, reinforced toe box, etc.) as Alpinestars' other excellent lineup of boots, the Mono Fuse boots performs flawlessly. With an insulated liner for winter, you could ride with these boots year round (and I have). They've been water resistant so far and are an easy on and off boot—this especially comes in handy when commuting to and from work.

Overall, the Mono Fuse is a very capable boot with great touring features and is comfortable to wear all day if need be. Priced at $299.95 they aren't a bad deal for a boot that can be worn in various weather conditions and throughout any season.

How the author tests gear.