The Ducati Scrambler Cafe Racer has got the look, but has it got the performance and thrill factor being promised? Read our review to find out. 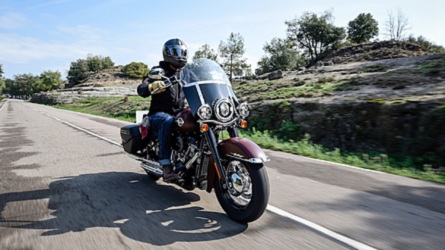 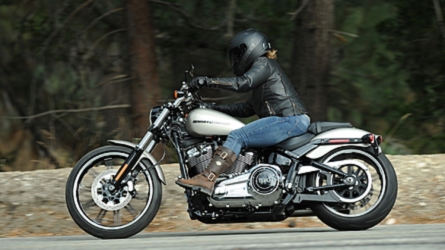 Plenty of bikes are sold as a lifestyle product, Harley-Davidson being the obvious example, and the Cafe Racer, and arguably the entire Scrambler line is definitely one of them, too. Just take a look at the Scrambler themed cafe in the center of Bologna. Rock up, grab some fast food with your compadres (who presumably also own Scramblers, or are at least Ducatisti of some kind) while searching for inspiration from the walls lined with Scrambler-themed accessories. Tanks with custom paint jobs, helmets, T-shirts, boots, jackets, rucksacks, you name it and Ducati has got it covered. There’s even a Scrambler radio station you can tune into, where in between the music there’ll be people talking about the Scrambler accessories they’ve bought, how they’ve modified their Scrambler or where they’ve been riding (scrambling?) recently. More cafés are planned around the world, and there’s even an app under development that’ll direct you to the closest one. 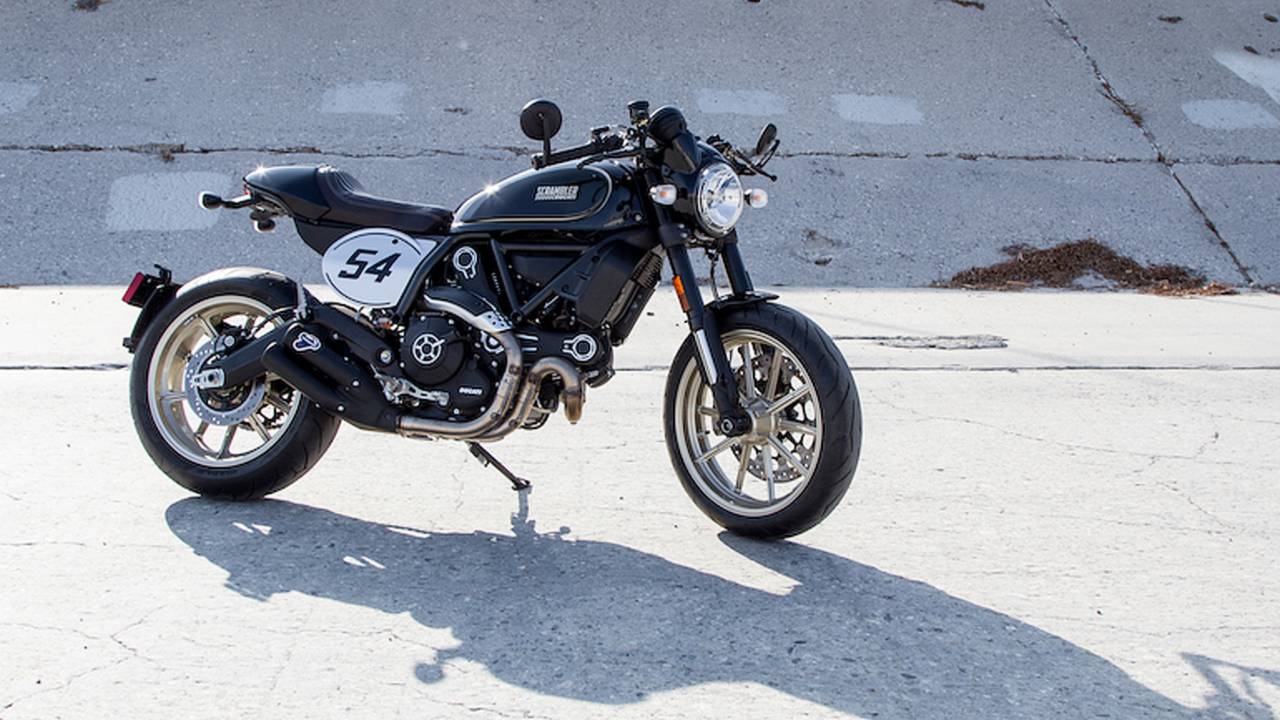 If you don’t already know, Scrambler Ducati is a Ducati sub-brand, kept at arm's length from the main Ducati brand. You might be wondering why; the answer is that Ducati has always stood for the most powerful, most beautiful and most luxurious two-wheeled vehicles. The Scrambler isn’t quite all that, so drawing a line between the two faces of Ducati is thought necessary to preserve the Ducati brand’s prestige.

The Scrambler range, of course, is aimed at a new, perhaps younger generation of riders. To that end, there are six different flavors to suit as many riders as possible. Scramblers are built around a common frame (with exception to the Desert Sled, which is beefed up slightly) and air-cooled twin (which also finds a home in the Monster 797). The engine puts out a mild 75 horsepower, so it’s "beginner friendly" but fun enough in the hands of more experienced riders as well. Ducati say they’ve adjusted the throttle cam for a “fairly progressive” response from the 803cc L-twin. 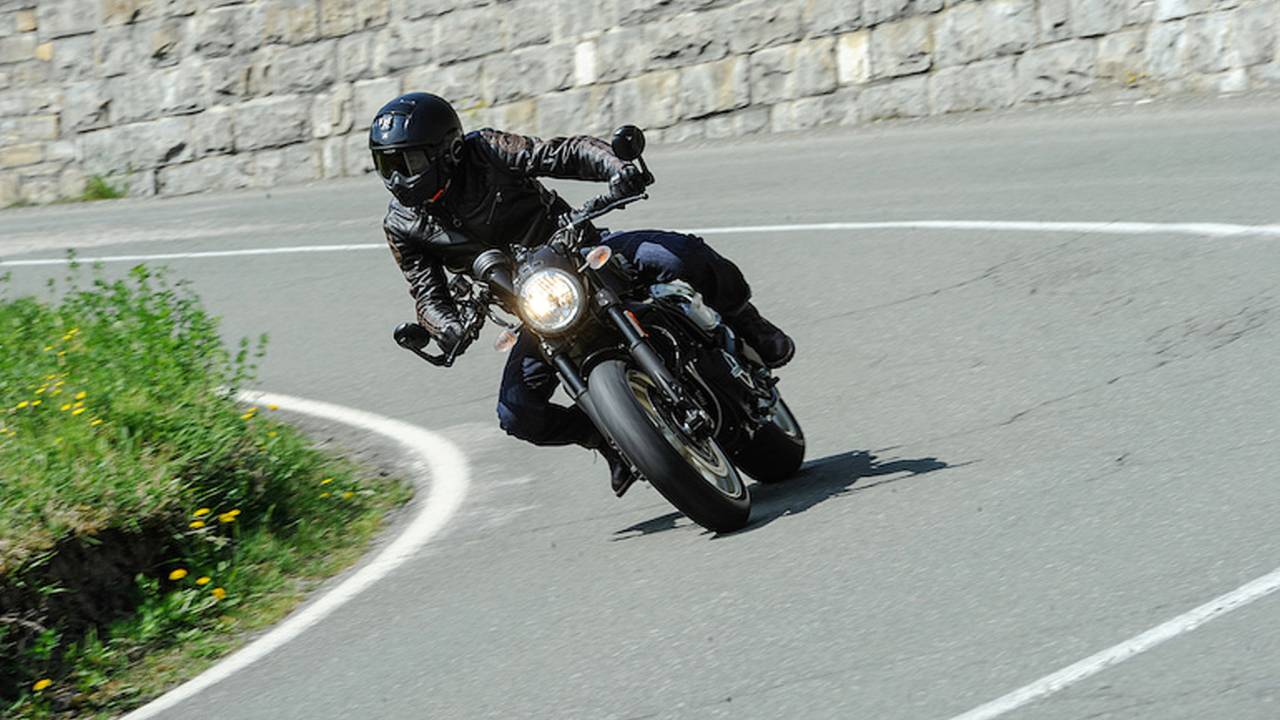 The Cafe Racer is the latest addition to the Scrambler menu. Ducati says the inspiration for the bike lies with legendary bikes from the 60s, as well as the 900SS. The tweaks to the Scrambler recipe for the Cafe Racer are simple - new suspension, new front wheel, clip-on handlebars, a number-plate holder that hugs the rear wheel and a seat cowl. There’s a new color scheme – which is, in fact, the only color that the Cafe Racer comes in – called Black Coffee. And that’s about it. If you’re wondering, as I was, whether there’s any significance to the number 54 on the side, it’s in recognition of Bruno Spaggiari, a successful ‘60s racer who rode a Ducati 350 Scrambler.

The “new suspension” isn’t really new; the forks just have longer internal tubes to cope with increased cornering forces; presumably they’re expecting it to be ridden harder than other models - and the 17-inch wheels shod with Pirelli Diablo Rosso II rubber further validate that theory. Somewhat surprisingly, though, the suspension isn’t hugely adjustable, something I expected it to be given the bike’s got "Racer" in its name, the only adjustable thing being preload on the rear monoshock. The rear brake is the same as on all other Scramblers with a single 245mm disc which is squeezed by a single pot caliper, with Bosch providing the brains behind the ABS system. However, the front brake has brawn - it’s a full-on radial Brembo master cylinder and a honking great 330mm single disc squeezed by a Brembo M4-32 caliper. I’ve seen plenty of these lifestyle bikes recently with a single disc up front – the Triumph Bobber and Yamaha SCR950 come to mind – which often come up as lacking in braking ability. The reason single discs are fitted is quite obviously for looks, an exercise in form over function, so it’s nice to see Ducati recognizing that shortcoming and fitting a front brake setup that might actually offer adequate braking performance. 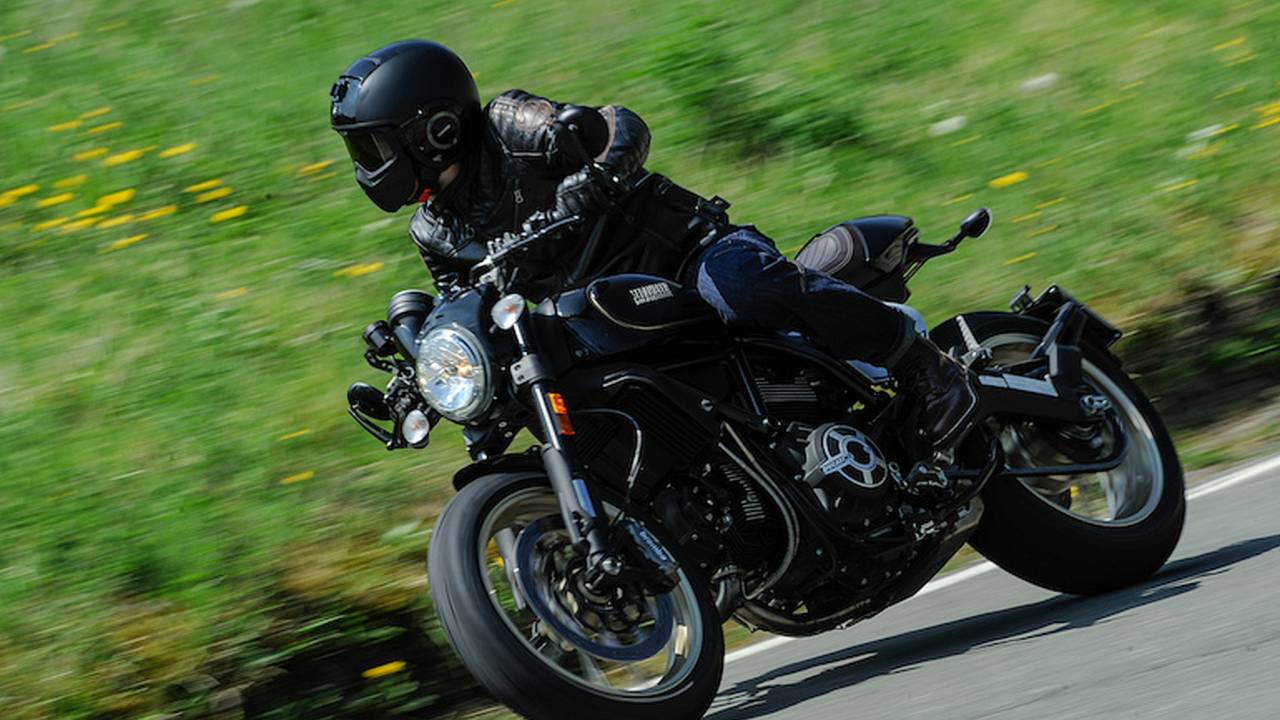 Aesthetically, it’s a lovely looking machine (and we’ll circle back to this point later). I really love the detailing on the tank, the gold paint job on the wheels is just right and there’s very little tacky plastic to be seen anywhere at all. The oil cooler is cleverly hidden away, and the Black Coffee metallic paint has a real depth to it. The leather seat and cowl look the part, and the the smoked reservoirs on the handlebars come as standard; no urine samples in sight. The engine’s painted black and has machined cooling fins and neat detailing on the cam-belt covers. The brake lever’s adjustable (but the clutch lever isn’t). The stock indicators stick out like a sore thumb against things like the smoked reservoirs but there’s a much nicer set in the accessory catalogue, which I’d urge anyone to fit even if you have to exist on a diet of ramen for a week to scrape the cash together for them. Speaking of the accessory catalogue, it’s bulging with all sorts of bits and pieces to customise from. Different exhausts, different tank panels (they’re swappable), different seats, fenders, you name it. 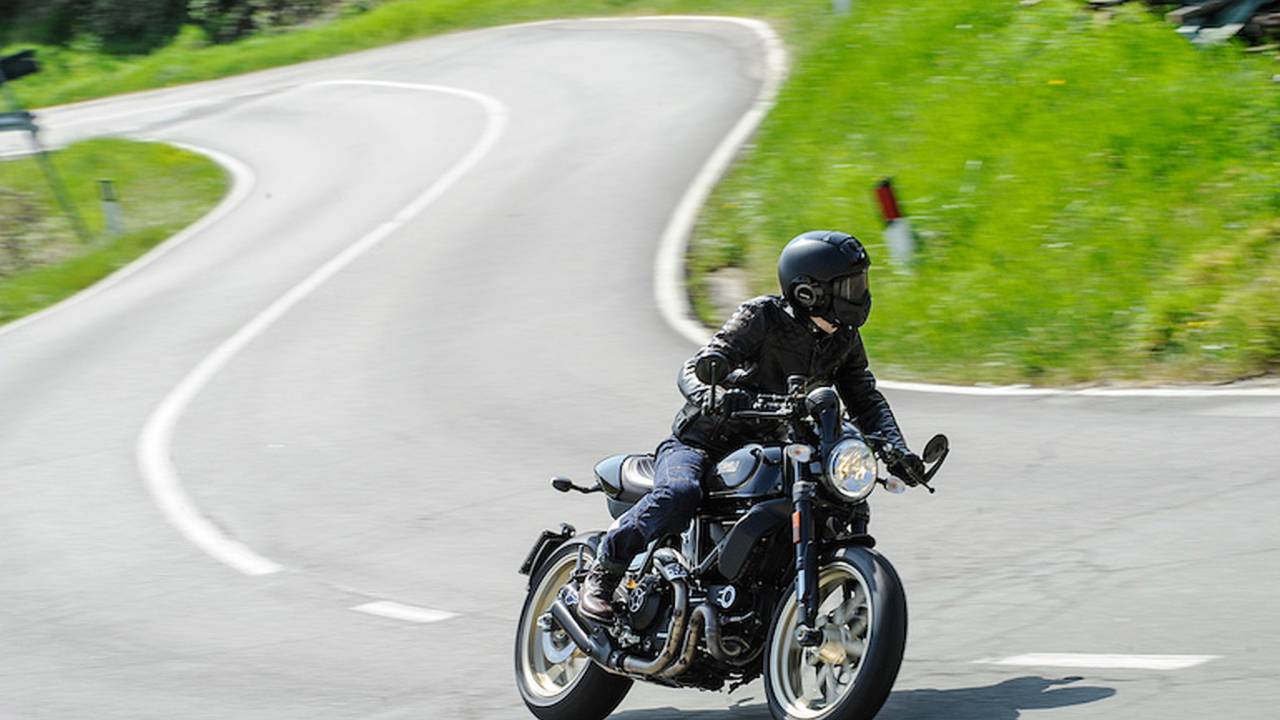 With the scene set, it's time to fire ‘er up and head out into the Apennine foothills of Italy. The motor coughs into life in typical asthmatic Ducati fashion; the battery’s not flat, that’s just how they roll. Aptly, we depart from the Scrambler cafe and munch a dozen-ish city miles before we find open roads. Those city miles give ample opportunity to get both feet completely flat on the deck at stop lights, and to get a feel for the clutch’s late bite point and the “friendly” throttle response. I’ve noticed by this point that there’s no gear indicator or fuel gauge, or, for that matter, any other electronic frills or gizmos. There are no engine map settings or traction control, just two trip meters, an odometer and a speedo. How refreshing; there’ll be no need for impromptu stops at the side of the road to change engine modes here. At stop lights a huge amount of heat pours off the rear cylinder onto my left leg, but the guard on the exhaust gives no such problems to the right. If you’re wondering about the mirrors – they actually work!

I feel very much sat in the bike rather than on the bike. Despite the Cafe Racer stance, with its clip ons, rear-set foot pegs and angled seat, it’s actually not all that aggressive. The wide clip ons are on very slight risers, and the rear sets are fairly low, which adds up to a surprisingly comfortable riding position. Certainly a stark contrast to bikes like BMW’s R Nine T Racer, or Yamaha’s XSR900 Abarth, which would certainly put off the vast majority of potential customers on a demo ride with their über-aggressive riding positions. 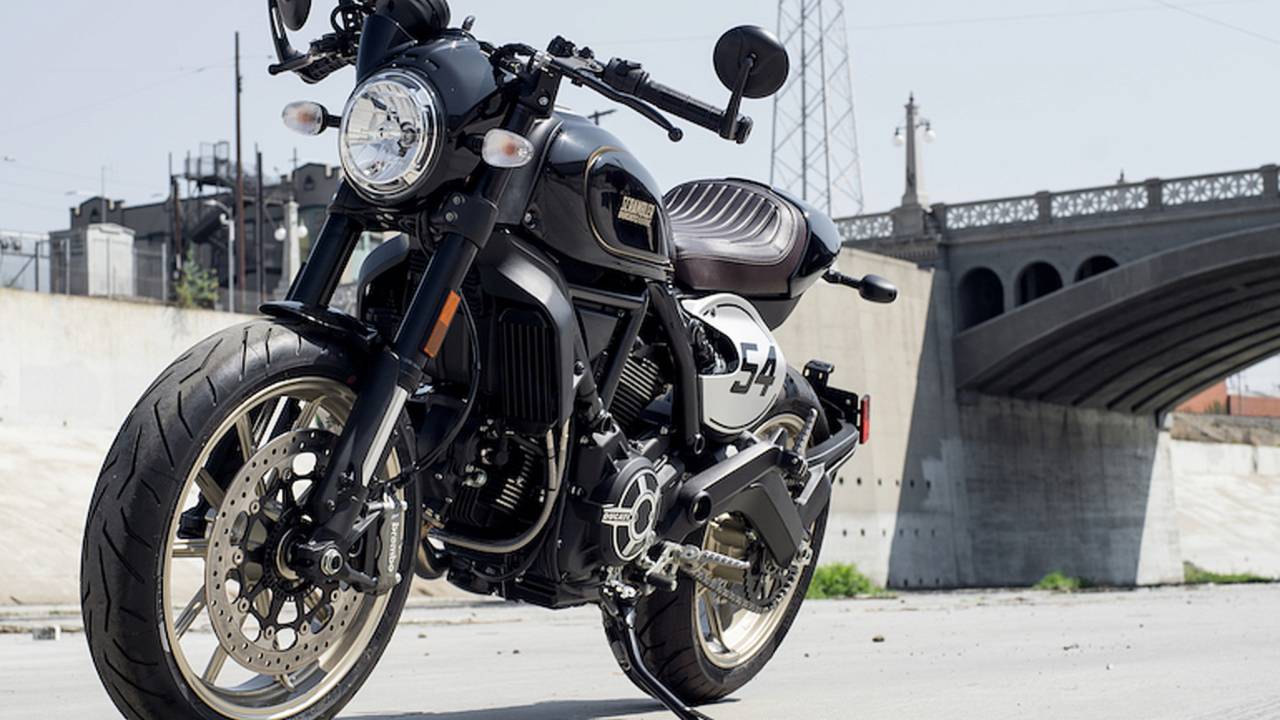 We’re out of the city now and making our way into the foothills, the roads are closing in a bit, corners are becoming tighter and the asphalt varying in condition from corner to corner. Second and 3rd gear do the job on these roads, and the spread of power that the motor makes is easy to work in your favor. Peak power comes in at 8,250 rpm and torque at around 5,750 rpm, so the bike’s happiest when fed a constant supply of gears to chew on. The exhaust emits a decent bark and there’s plenty of ‘blap’ from the airbox.

As I suspected it might, the Brembo front brake setup delivers everything in reality that it promises on paper. The sticky tires and warm asphalt quickly add up to a decently fast-paced ride, and the Cafe Racer is happy to oblige quick changes of direction with its 188 kg (414 lbs) wet weight. So it's good to know I have enough stopping power on tap. 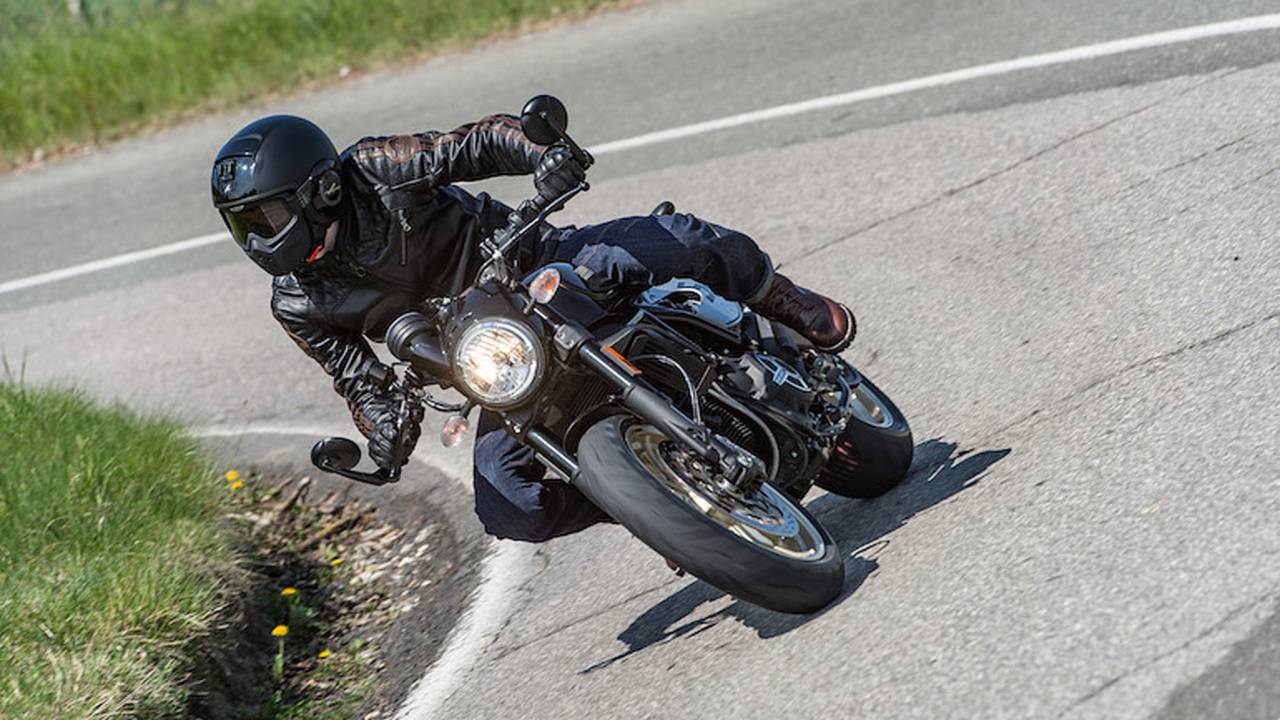 The pegs and bars, despite being "friendly," still seat you in a position that permits riding aggressively if you want to. The pace continues to increase and it doesn’t take much longer before we’re riding well beyond the limit of the suspension and chassis. The softly sprung forks are diving heavily on the brakes now, bottoming out on numerous occasions (even with my featherweight 60kg frame), and wallow mid-corner on rutted pavement. But it’s a load of fun regardless. New riders won’t get anywhere near this level, and experienced riders will have fun riding a slow bike fast, as we were. I did find two false neutrals, and I’m told it’s an aspect of this particular gearbox. Meanwhile, on longer, straighter stretches of road, it’ll plod along at 65 mph in 6th at a relaxed 4,000 rpm.

All in, we managed a 142-mile ride. By around 100 miles, my backside was rather tired of the seat, and most other riders on the test were complaining after the same distance, so it wasn’t just me being a wimp. Ducati claim 55.6 mpg, and the tank will hold 13.5 litres of go-go juice. Given the fast paced ride, and the fact none of us caught a glimpse of a fuel light, I very much suspect the tanks were topped up at lunch when we weren’t looking (and to back that theory up, there was loads of fuel left sloshing around after our ride). Therefore, I can’t tell you what the real world mpg would have been, but I’d hope for at the very least 45 mpg average, meaning ~135 miles of tank range. Service intervals are a very respectable 7,500 miles. 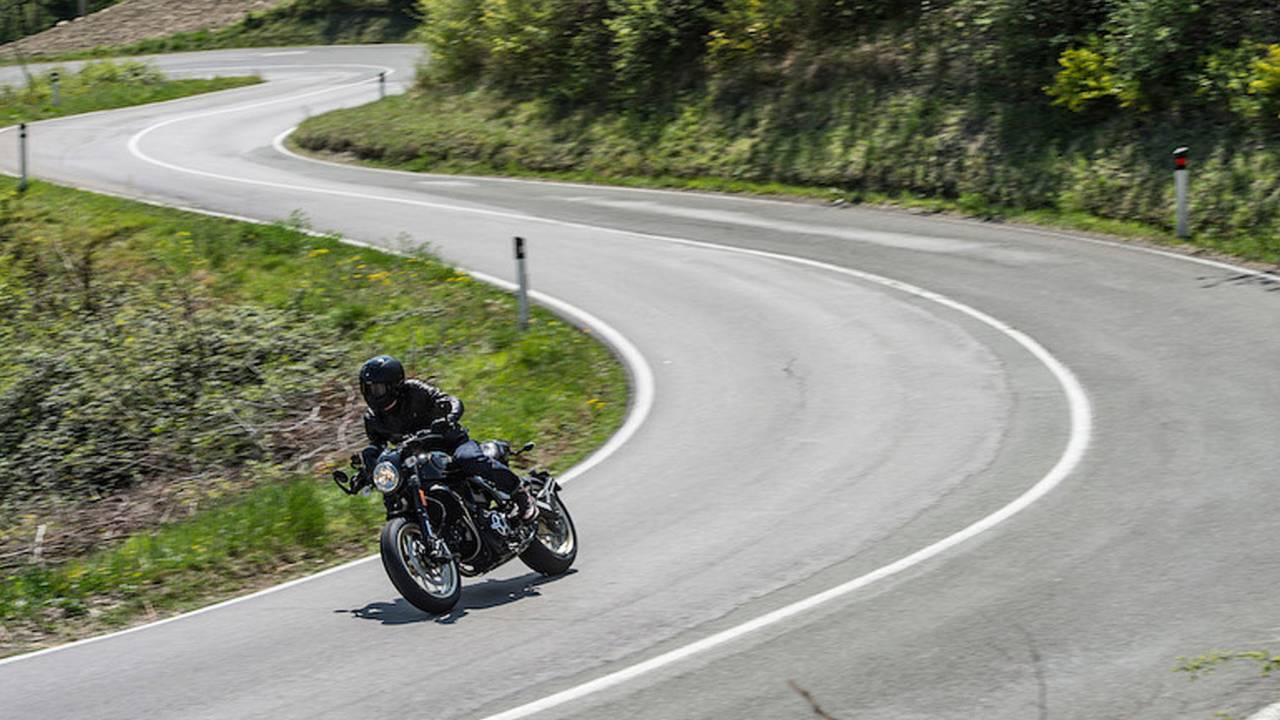 I said we’d circle back to a point I was making about how nice the Cafe Racer looks. The paragraph before I said that, I noted that the Scrambler brand and range is kept at arm's length from the main Ducati brand because there’s a perception that the Scrambler brand doesn’t quite stand for all the things that the normal Ducati brand stands for (beauty, power, prestige, blah blah blah). It seems to me that this Cafe Racer could very easily sit in amongst the main Ducati range; it’s just as premium as anything in the main Ducati range – especially given the braking hardware, Termignoni badged exhaust, and the overall premium look and feel of the thing. The Cafe Racer, to me, appears to be the stand-out model in the Scrambler range. Give it fully adjustable suspension and it’d more than meet the entry requirements.

I really like the Scrambler Cafe Racer – that much should be obvious already. It has the “Cafe” part of “Cafe Racer” nailed and an appropriate amount of the “Racer” part sorted, too. Anyone can ride a Cafe Racer and have fun, no matter whether beginner or seasoned rider. It’ll cost you £9,395 (US $11,395) which is steep, but I don’t think it matters too much. The guys (and girls) buying these are buying into a lifestyle and an image, and I think they’ll pay that price gladly. If that’s your thing, it’ll be money well spent.

By: Randle McMurphy
++
++
Got a tip for us? Email: tips@rideapart.com