Triumph Partners With Gibson For DGR 2022 And Custom Project

In order to appeal to American consumers, Triumph introduced the Bonneville T120 in 1959. In addition to the punched-out cylinders, Triumph fortified its parallel-twin with twin carburetors, a one-piece crankshaft, a splayed-port cylinder head, and a bolt-on flywheel. Those procurements helped the air-cooled, 649cc mill produce 48.8 horsepower and achieve a 115-mph top speed. By the end of 1959, the T120 buoyed the brand’s U.S. sales.

Similarly, Gibson revolutionized the music industry in 1959 when it launched the Les Paul Standard guitar. From Jimmy Page to Slash, the Les Paul has become the choice ax for legendary shredders and aspiring rock stars. To celebrate the watershed motorcycle and guitar model, Triumph and Gibson have announced a custom collaboration and 2022 Distinguished Gentleman’s Ride (DGR) partnership.

Triumph has supported DGR since 2014, and Hinckley recently renewed its DGR deal until 2026. Together, Triumph and Gibson will help raise funds for men’s mental health and prostate cancer awareness, but both parties will divulge the partnership's full details on March 22, 2022. The DGR tie-in isn't the only initiative, though. The prepared press release also teases a custom collaboration based on the Bonneville T120 and Les Paul Standard. 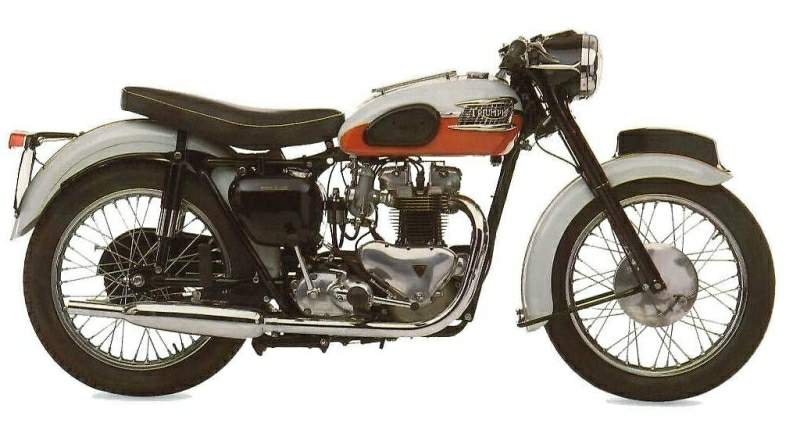 While the original T120 Grey/Tangerine paint scheme wasn’t the most popular colorway in its day, the variant commands top dollar nowadays. Of course, the latest-generation Triumph Bonneville T120 moniker corresponds to the powerplant's capacity instead of firm’s target top speed. Now, as a modern-classic, the T120 boasts a 1,197cc parallel-twin pumping out 79 horsepower and 77 lb-ft of torque.

The Les Paul Standard has evolved over the decades as well, with Gibson offering countless renditions since 1959. Despite the different versions, the original Burst finish remains the most iconic Les Paul to date. Triumph and Gibson may be holding their cards close to the chest, but we would love to see Les Paul Standard-inspired Bonnie join Triumph's long list of special-edition models.

Unfortunately, we’ll have to wait until March 22, 2022, before Triumph and Gibson reveal what they have in store. 1959 may have been a watershed year for the two brands, but it looks like 2022 will be another instrumental moment for Triumph and Gibson.

For A Good Cause: