The City of Lights will lay the groundwork for future regulations.

France has taken several regulatory steps to curb its carbon footprint in recent years. While the country’s sound radar and sound cameras have been aimed at reducing noise pollution, Paris has implemented an increasingly-stringent Low Emission Zone (ZFE) for years now. Local authorities levied the restrictions on commercial vehicles first, with buses and trucks (3.5 tons+) manufactured before October 1st, 2001, in September, 2015.

By 2016, the regulations soon extended to cars produced before 1997 and motorcycles made prior to 2000. Paris ratcheted up the standards on June 1, 2021, when motorcycles and scooters registered before 2004 no longer enjoy access to the city’s ZFE on public holidays and weekdays between 8 a.m. to 8 p.m. 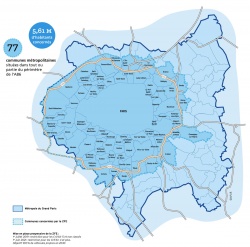 After only a year in effect, Paris was slated to enact even stricter restrictions by July 1, 2022. That’s when Crit’Air 3 vehicles including motorcycles and scooters manufactured before January 1, 2007. Luckily, for owners of Crit’Air 3 two-wheelers, the city will need to postpone that measure for at least six months. That delay will push the new regulations to at least 2023, but in the interim, the City of Lights will lay the groundwork for future internal combustion vehicle crackdowns.

Similar to France’s countrywide camera program, Paris will install cameras dedicated to regulating French roads. The cameras in the city, however, will monitor the vehicle stickers displayed by motorcycles and scooters traveling through the country’s capital. The current cameras effectively capture automobile stickers, but the new cameras will automatically identify non-conforming stickers and fine the owners/operators.

Paris will also use that six-month moratorium to secure approval for incentive programs aimed at convincing city dwellers to transition to electric mobility. On the other hand, Paris’ original plan called for a ban on Crit'Air 2/Euro 3 vehicles in 2024. Paris hasn’t stated whether it will push those regulations back due to the Crit’Air 3 delay, but it still plans to ban all combustion models by 2030.