The Factory Ducati MotoGP team has been on a hot streak recently. In the last five races, Francesco “Pecco” Bagnaia has nabbed five consecutive pole positions, three wins, and four podiums overall. Rider Jack Miller joined his teammate on the podium at the penultimate round of the 2021 season, the Algarve Grand Prix, to help secure Ducati’s third MotoGP Constructor’s Title.

With the Team Championship in the balance at the final race in Valencia, Spain, and the 2022 season just four months away, the team is carrying a lot of momentum into the off-season. We sat down with Ducati Corse Sporting Director Paolo Ciabatti to see just how the Bologna Factory plans to turn all that recent success into a fruitful 2022.

Ducati Corse recently secured its second consecutive and third overall MotoGP Constructor's Championship. What aspect of the Desmosedici GP20 and GP 21 made the greatest difference over the last few seasons?

I think this year’s Constructors Title is even more important than last year's. Obviously, we’re always happy when we win but last year was a very strange championship with a very compact calendar. Also, Yamaha lost points because of their valve problem, so this championship is something we really feel proud of and I think it's fully deserved. We were winning races with three different riders, on the podium with five riders, so I think it proves that the Ducati Desmosedici GP is probably one of, or the best bike of Moto GP today.

For sure, it’s not the perfect bike because the perfect bike doesn't exist, but we’ve made lots of improvements. We made a new aerodynamic package with a different concept on the side fairings. We worked a lot on the chassis, which is still one of the weakest areas for Ducati, but I think we improved a lot in that area. Our riders also were able to understand the new tires Michelin brought last year. Their riding style, the improvements on the bike, and the understanding of the new tires were the keys to our success this year.

In 2021, Ducati bet on youth with riders Francesco Bagnaia and Jack Miller. How have they impacted the development of the Desmosedici GP and the Ducati Corse team culture?

Stepping up to a factory team brings some extra motivation to the riders and also some extra responsibility for them. You need to show that you’re able to win races and none of them had won a race on a Ducati before. This year, they both started fast but Jack won two Grands Prix and it was very emotional for him to win again with us. Then Pecco kept growing, growing, and growing. If you see his performances in the last five races, it was five consecutive pole positions and he won three races.

They are a very good match. They’re very different characters but they respect each other. They help each other. They exchange information. Your teammate is always your number one competitor, but if you have this kind of respect and this kind of team spirit, I think this is what we were looking for and what we found. 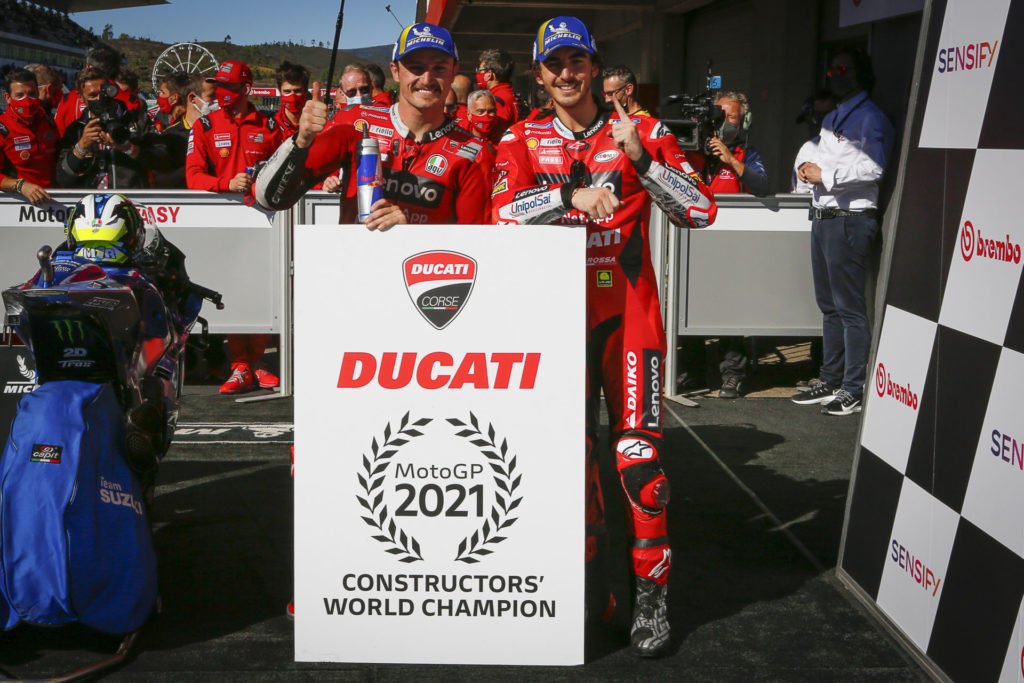 In 2022, Ducati will have eight motorcycles on the MotoGP grid. How will such a diverse and young group of riders help Ducati Corse improve the Desmosedici GP?

We always share data among the riders. For us, having six riders this year and 8 next year is a source of very good information for all the riders and the engineers. As an example, this year Pecco won the fantastic race in Aragon fighting with (Marc) Marquez, but during the Saturday (practice) he was still not happy about the way he would do the last turn onto the finish line straight. Looking at the data of Jorge Martin, (Pecco) saw how he was approaching that corner in an effective way. It's a small example but what we do is actually put all the data together for all engineers and riders on Ducati. Adding two additional young riders to the Ducati family, we also have the group of probably the best young riders with Ducati.

Ducati has finished runner-up in the MotoGP Rider's Championship in four of the last five seasons. What changes does the team need to make to capture that elusive second title in the coming years?

I think we feel very confident at the moment that we have the right tools to fight for the Rider’s Championship. As you could see in the last five races, the best rider was definitely Pecco, but we keep working hard. There is no other way to do it. I think we have the riders able to fight (for the championship), and more than just the two factory riders, because Johann Zarco and Jorge Martin are capable of being on the podium. Enea Bastianini had a fantastic end of the season and scored two podiums.

I don't think we need to do an incredible step. I think we already have in place what is needed, we just need to keep the riders in very good form and do the small improvements, but nobody is sleeping during the winter (break). Everybody will come up with a more competitive bike, so our engineers—guided by Gigi (Dall'Igna)—never stop thinking about unconventional ideas. This is what has helped Ducati to be as competitive as we are now, as well as the talent of our new riders.

AFT CEO Wants To See More Brands And Diversity On The Flat Track
How Do You Win A Bagger Race? Indian Rider Tyler O'Hara Tells Us.
By: Dustin Wheelen
++
++
Got a tip for us? Email: tips@rideapart.com

Would You Want An Electric Motor That Directly Swaps Into Your 50cc Bike?
What Extremely Rare Piece Of Harley History Is Lurking Inside This Crate?
This Honda CBX With A Six-Into-Six Exhaust Is An Exhilarating Beast
Watch A Honda Monkey Escape To The Woods For A Perfect Coffee Break
Peer-To-Peer Rental Service Twisted Road Adopts 20-Point Inspection
Comment!
Commenting Guidelines