Cue your vaporwave playlist up now.

What do you like to see in modern interpretations of classic motorcycle designs? Maybe that’s not a fair question, because it probably varies depending on what bike is involved. Let’s say you’re thinking about the Honda Motocompo. What would a 2021 version look like 40 years after the original roamed the streets?

If you’re graphic designer Allan Williams, for a start, you’d make it bigger. I mean, it’s right there in the name of his design: Honda Motocompo XL. It’s essentially a full-sized, modernized take on many of the design cues found on the original Motocompo—except, of course, it’s not meant to be foldable. What purpose would having a foldable full-sized bike serve, anyway?

The seating position is also considerably less upright on this Motocompo XL render. While the saddle sits directly above the footpegs, Williams took a café racer approach to the XL. The clip-ons are positioned so a rider would sit in the crouched position typical for the category.

Solid wheels feature oversized Honda wing logos, and presumably there would be an electric motor hidden away in the rear wheel—or perhaps even both, if we’re spitballing. A wraparound Cylonesque rear brake light and turn signal assembly flows around the chopped tail, which flows into a tuck-and-roll type saddle.

It’s just a render, we know, but it’s not immediately clear how you’d brake on the Motocompo XL as it’s currently drawn. Likewise, there’s no center or side stand that we can see in these images. Up front, there’s a trio of unlabeled round buttons up toward the display, with the middle one resembling an inverted NES Advantage button, and the smaller two flanking that center one also looking distinctly gamified. Perhaps this is a small nod to one of Williams’ previous designs, the Nintendo Super FamiGUN.

As it stands, there are also zero mirrors located on this render. Then again, if this design was ever to come to fruition, there’s that seemingly unwritten rule that if it exists, people will probably race it. If intended for street use, it’s not clear where mirrors would go and what they’d look like, but it’s an interesting design to contemplate.

Blast To The Future: 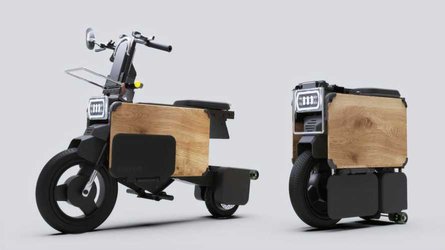 Is This Folding Electric Concept Bike A 21st Century Motocompo? 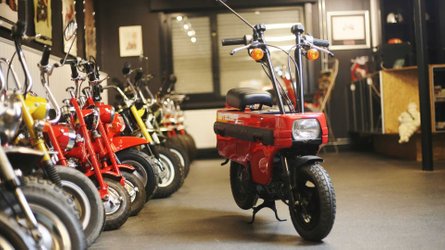