Energica's founders will stay in the game, albeit with a smaller stake.

Back in March, 2021, the electric motorcycle specialists at Energica announced that they’d secured funding from Ideanomics, a financial technology firm that’s largely focused on development of promising electric vehicle technologies. For its part, Ideanomics purchased what amounted to a 20 percent stake in Energica at that time.

Fast-forward to September, 2021, and Ideanomics is on track to increase its stake in Energica. By how much, you’re wondering? If regulators smile on the proposed deal, Ideanomics will own 70 percent of Energica, with Energica’s founders owning an approximate 29 percent stake in the electric motorbike OEM.

This comes after Energica reported almost doubling its sales in 2020, in addition to accepting its largest order for new bikes ever in the first half of 2021. In both instances, Energica didn’t provide specific numbers. While we certainly aren’t saying this is the case, it’s important to remember that at the extreme end, adding one to one and getting two could still technically be an accurate use of the phrase “doubling sales.”

2021 MotoE World Championship Gets Back On Track In Austria
⠀ 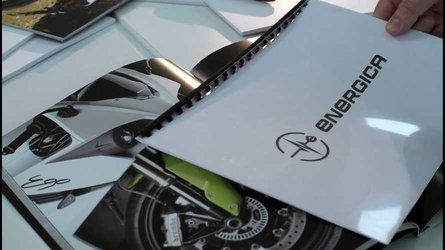 "We are thrilled to further our relationship with Ideanomics as they continue to expand their global footprint in the EV industry, especially the promising two-wheeler market," Energica Motor Company CEO Livia Cevolini said in a statement.

"Ideanomics provides access to a synergistic network of innovative companies addressing global challenges within the zero-emission transportation segment. We look forward to continued growth, innovation and collaboration within the Ideanomics ecosystem,” she continued.

"We are grateful for Energica's continued interest in growing synergistically alongside other brands within the Ideanomics Mobility ecosystem," said Ideanomics CEO Alf Poor in a statement.

"With exceptional management and leadership in place and a full range of innovative zero-emissions products already in market, we believe Energica has the opportunity to benefit strongly from Ideanomics Capital's resources, transforming their growth trajectory and positioning them as a global leader in the electric motorcycle market,” he concluded.

"The two-wheeler electric market is poised for significant growth, and we couldn't be more excited about the synergies between Ideanomics and Energica that will allow us to be a prime player in this space," said Ideanomics Executive Chairman Shane McMahon in a statement. "This vibrant piece we are adding to the mobility business will not only expand our market reach, but also add significant weight to the mechanical expertise and technology innovation in the two-wheeler space,” he added.

How this will shake out for Energica’s future remains to be seen, but as always, we’re hoping for the best.