On June 19, 2021, Jetwerx—the organizers of Canada’s national motocross series—held an independent race in advance of its first national round of the year. It would serve as a chance for them to shake off the rust, check the timing system, and test the broadcast equipment. Jetwerx could have hosted a standard race, with the usual class structure, but decided to have some fun and create a whole new event: the first-ever Mini Bike Triple Crown Championship.

Yes, a mini bike race, run by a national MX series, exclusively for dirt bikes between 50-150cc in displacement. Sounds like a heck of a good time, eh? It did to me, which is why I sprang for my credit card when online registration opened in April. A deposit of 20 bucks reserved your spot; as far as impulse purchases go, this one was pretty cheap and absolutely justifiable.

Kids got the spotlight in their own 50cc class.

The classes filled up just hours after registration opened, however, and I ended up on the wait list. Fully expecting to sit it out, I found out five days before the race that I was officially entered in the Amateur 70-110cc class. Sweet!

However, there was just one problem: I don’t have a mini bike. Actually, I don’t even have a dirt bike. Fortunately, I’ve got good friends in the right places, and I landed a bone-stock 2017 Honda CRF110F (thanks, Ross!). I picked it up the day before, rode it for half an hour in the back field behind my parents’ house, and loaded it back up for the trip to Shady Oaks MX, a private track near Sarnia, Ontario, across the border from Detroit.

There was no shortage of tricked-out mini machinery on-site.

As you might expect at a minibike race, the mood on the premises was positive and super relaxed. The usual stresses of racing were nonexistent, as were the spectators, which were still not allowed in Ontario due to lockdown restrictions. Fun was the ultimate goal, but there were championships to be won!

A youth rider gets some pre-race pointers.

In keeping with the Triple Crown theme, organizers used three configurations of the Shady Oak track to represent motocross, supercross, and arenacross. After morning practice, it was right to the finals, which were broadcast live via FloRacing.com. The total points scored in each of three races would determine the final standings.

Morning practice allowed everyone a quick chance to assess the track conditions and different layouts, but the sessions were short. This is where I should point out that, in addition to not owning a dirt bike, I also don’t ride MX. Like, ever. I’ve done one lap on a real MX track. I can ride off-road, and I’ve raced plenty in other disciplines, but if I’m on a bike and my tires are off the ground, it usually means I’m in big trouble. The racers in my class were all experienced motocross riders. Not only that, they were all teenagers.

Riders managed to get plenty of air despite a lack of displacement.

All of this is to say that I had no delusions of grandeur; I was hoping my drag racing background might net me a few good starts out of the gate, but I was fully prepared to finish in the back half of the field. The speed of these kids during practice caused me to lower my expectations even further.

The author (35) puts the hammer down on the CRF.

Unfortunately, any holeshot skills I had were nullified by the extra girth I carried compared to my competition, leaving me mired in a chaotic herd of little Hondas going into turn one while the leaders were already checking out. Furthermore, MX is exhausting, even on mini bikes on a mini track (you’ll have to trust my 42-year-old muscles on this one). After the second race, my body was sore everywhere. This truly is a young person’s sport.

As for me, I saved my best—and worst—for the last race of the day. With a strong start, I was in the top 10 going into turn 1 and passed a few more riders early on. I was in eighth place, a pack of five hungry riders biting at my heels, when I suffered my only wipeout of the day—a front-end washout. I didn't get plowed into by anyone, so I picked the bike up and put in the laps to finish the race.

I can admit that I got lapped by the winner, but some redemption came when I actually lapped a rider. Was it a 10-year-old girl? Like that’s important! I told you, this was about having a hoot on little bikes. Plus, I brought my dad along as my crew chief (the day before Father’s Day), and it gave each of us a chance to leave home and do something outdoors now that Ontario’s endless lockdown was finally lifting.

I’m already eager to do it again, but I really hope they add a 35+ Vet class next year. 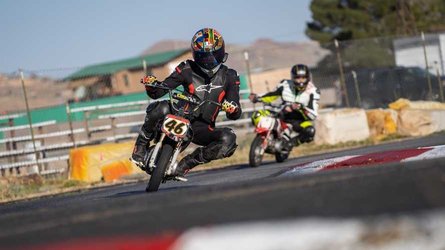 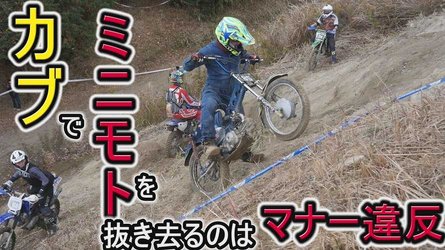 Mini Moto Enduro Is Your New Favorite Sport (And Mine)

By: Graeme Jones
++
Got a tip for us? Email: tips@rideapart.com