On Any Sunday Celebrates 50th Anniversary

For motorcyclists, one of the most noteworthy cultural milestones of 2021 is the 50th anniversary of On Any Sunday. Bruce Brown’s 16mm homage to motorcycling is arguably the most important motorcycle movie ever made, and it’s certainly the most awesome. (Take that, Wild Hogs!)

When a 32-year-old Brown turned his lens from surfing to motorcycling in 1970, little did he know how much of an impact his movie would make on the world of motorcycling and American culture as a whole. The 96-minute feature film is centered around riding buddies Malcolm Smith, Mert Lawwill, and a certain A-list actor by the name of Steve McQueen. While McQueen was already a well-known star of the screen by this time, it’s important to assert that Brown’s artistic vision and stunning camerawork are what garnered the film success both then and now. McQueen helped finance the production, but it was not his star power that turned it into a box-office success nor a cultural phenomenon.

In fact, while the motorcycles and riders are the stars, Brown’s talent is what really makes this documentary shine. He blends a traditional filmmaking background with his flair for the creative, employing camera techniques rarely used up to that point. This includes gorgeous slow-motion sequences, on-board cameras, panning shots with a telephoto lens, and aerial footage from a helicopter.

On Any Sunday is the kind of project the documentary medium of film was made for, and Brown proves himself to be a master of his craft.

The movie is definitely of its time, but this isn’t a bad thing. In fact, quite the opposite; watching it 50 years later is like opening up a time capsule. It’s pure nostalgia. From the dated title sequence to the vintage motorcycles, the old bucket lids to the fashion trends on and off the bikes, Brown takes you back. Even if you weren’t alive in 1971, you can’t help but get immersed in this exciting era of the past. The fact that it was shot on 16mm film gives it a distinctly aged tone that feels just right. All that’s missing is a hot dog and a bottle of Coke.

Adding to the nostalgic vibes are Brown’s friendly voice (he's the narrator) and the delightful lo-fi music, an unsung hero of the film. The soundtrack jumps from sunbaked surf ballads to funky R&B grooves and even some silly old-time numbers, each piece matched perfectly to what’s on screen. Of course, Brown doesn’t forget to include the occasional rumble of a Harley XR750 flat-tracker or the cacophony of a hundred enduro bikes leaving the starting line of a desert scramble.

On Any Sunday was officially released on July 28, 1971. It was done on a budget of $313,000 (approximately $2.1 million today) and got nominated for an Academy Award in the Best Documentary Feature category in 1972. Aesthetics aside, the film has been credited with getting thousands of people into motorcycling while helping to dispel the negative perception of motorcyclists cultivated throughout the 1960s. It also introduced a new audience to personalities like Smith and Lawwill, but also lesser-known racers like Dick Mann, Dave Aldana, Cal Raybourn, and Gene Romero.

On the occasion of its 50th anniversary, the importance of On Any Sunday and its legacy must be acknowledged. The film’s title sequence has been credited with turning the regional California hobby of BMX racing into a national craze, while Brown’s shots from the International Six Days’ Enduro (ISDE) and Lake Elsinore Grand Prix established enduro racing and scrambles as staples of the sport. Glimpses into the lesser-known activities of sidecar racing, drags, ice racing, land speed competition and hill climbing also contributed to growth and recognition for all these disciplines.

The movie wraps up with the three main characters of Smith, Lawwill and McQueen enjoying the simple pleasure of riding together, jumping dunes, pulling wheelies for the camera, and riding off into the sunset.

“There’s something about going riding with your friends—a feeling of freedom, a feeling of joy—that really can’t be put into words,” narrates Brown at the conclusion of the film. “It can only be fully shared by someone who’s done it.”

Whether you’re bemoaning your favorite bike flick turning 50 or you’ve never seen it before, I encourage you to dig out an old VHS copy of On Any Sunday (or, you know, find it online) and celebrate its half-century anniversary. While taking the trip down memory lane, be sure to raise a glass to Bruce Brown (who passed away in 2017) for his little film and the big impact it’s had on our sport. 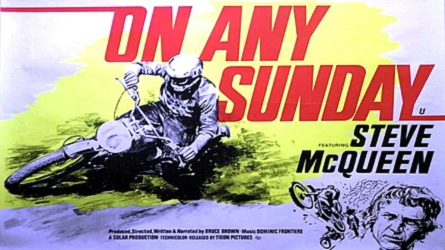 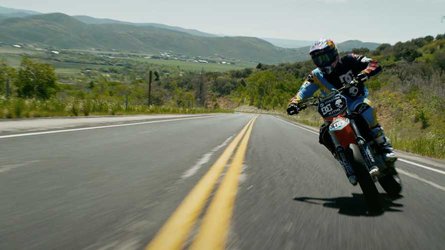 Check Out On Any Sunday’s Second Chapter!
By: Graeme Jones
++
++
Got a tip for us? Email: tips@rideapart.com