Carbon-Neutral Fuels Could Help The Environment In Non-EVs

Battery tech and infrastructure aren't practical in all cases, but this could help fill in the gaps.

Electric vehicles for personal use—cars, light trucks, motorcycles, scooters, etc.—are becoming more commonplace, but electrification hasn’t found its way into many other transportation segments yet. For example, at the time of writing in February, 2021, neither battery technology nor charging infrastructure are up to the task of handling aviation and/or long-haul shipping needs yet.

Luckily, there are companies focused on creating carbon-neutral fuels for these and other applications—perhaps also including those classic piston-powered bikes and cars that you can’t bring yourself to part with. Now, if you’re unfamiliar with the terms “carbon-neutral fuel” or “efuel” and think it’s just greenwashing, there’s some sound method behind the madness. Car magazine Evo published a great, in-depth explainer on how e-fuels work back in November, 2020, that’s well worth reading if you’re interested in this topic.

To create synthetic fuels, one process captures either carbon monoxide or carbon dioxide directly from the atmosphere. In a separate process, it uses electrolysis to separate the hydrogen and oxygen found in water. By synthesizing the hydrogen with the reclaimed carbon, this process creates a completely synthetic efuel. If you use, say, a whole bunch of wind power to make the magic happen, you get a reasonably carbon-neutral product that should be on par with what current EV makers can achieve in their production processes.

Eyes On The Prize: 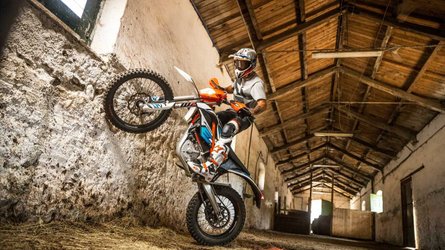 Since volume and energy density are on par with fossil fuels, those efuels can be used as a one-to-one replacement in existing piston engines. A second type of synthetic fuel production process utilizes biomass (industrial byproducts from forestry, for example), which is another subject for another day.

In December, 2020, Porsche and Siemens Energy announced a team up with energy firm AME, Chilean petroleum company ENAP, and Italian energy company Enel to create an efuel project. Called “Haru Oni,” this pilot project will happen in the Magallanes Province of Chile, where there’s abundant wind energy to power fuel production. The German government is investing 8 million Euros in the form of a grant, as part of Germany’s ongoing national hydrogen strategy.

“Electromobility is a top priority at Porsche. eFuels for cars are a worthwhile complement to that – if they’re produced in parts of the world where a surplus of sustainable energy is available,” Porsche CEO Oliver Blume said in a statement.

“They are an additional element on the road to decarbonization. Their advantages lie in their ease of application: eFuels can be used in combustion engines and plug-in hybrids, and can make use of the existing network of filling stations. By using them, we can make a further contribution toward protecting the climate,” he continued.

“As a maker of high-performance, efficient engines, we have broad technical expertise. We know exactly what fuel characteristics our engines need in order to operate with minimal impact on the climate. Our involvement in the world’s first commercial, integrated eFuels plant supports the development of the alternative fuels of the future,” Blume concluded.

If all goes according to plan, the pilot phase of Haru Oni will produce about 130,000 liters of efuel as soon as 2022. Once that benchmark is met, production will increase, with around 55 million liters expected per year by 2024, and 550 million by 2026. Naturally, Porsche plans to be its own best customer for this fuel, although it definitely won’t be the only customer. The automaker is investing around 20 million Euros of its own money into this project, as well.

Haru Oni isn’t the only such project, and rethinking how we power our vehicles is going to require multiple solutions in order to be sustainable. No matter how many wheels those vehicles have—or even if they have wheels at all—taking a thoughtful, multi-pronged approach seems like a much-needed change.