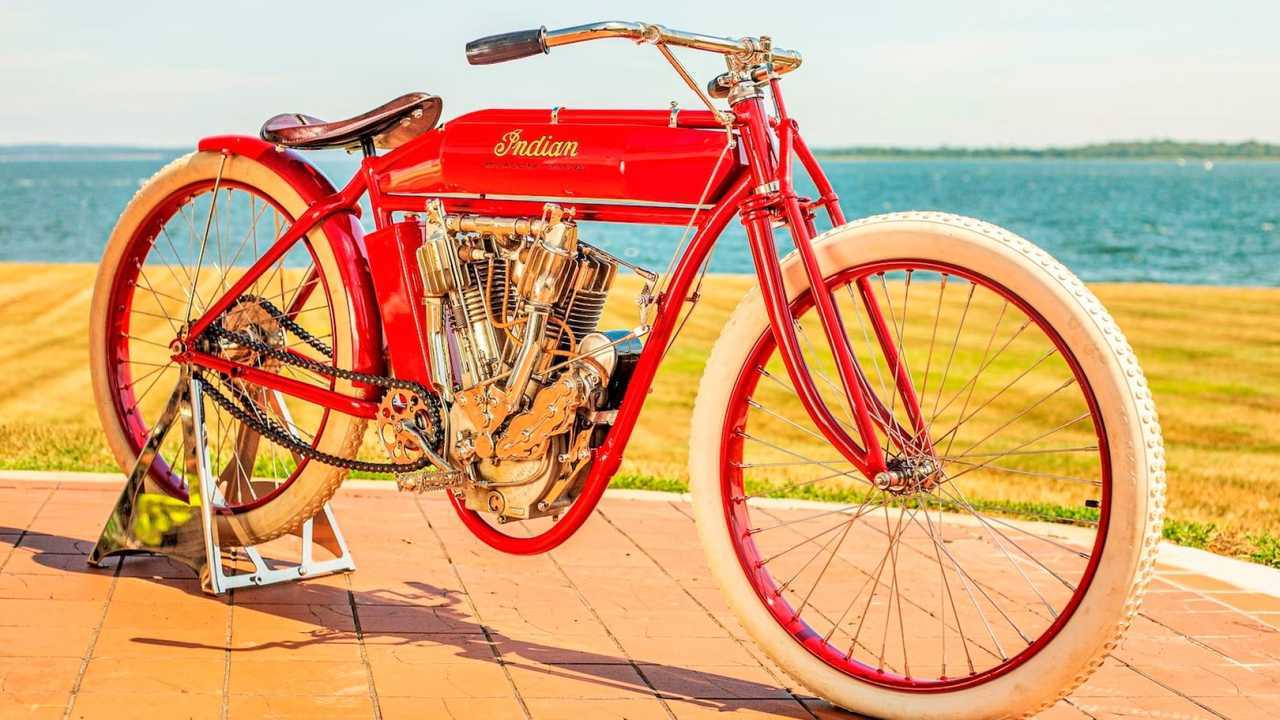 Even the V-twin engine was a rather new idea.

The early 20th century was a different time for motorcycles. To quote Douglas Adams, "In those days spirits were brave, the stakes were high, men were real men, women were real women, and small furry creatures from Alpha Centauri were real small furry creatures from Alpha Centauri." Motorcycles were barely more than bicycles with engines attached, but that didn't stop them from achieving 100 MPH on board tracks, fast even by today's standards.

Today, Indian is known as a Polaris-owned brand making modern motorcycles that try to look like the cruisers of old (except for the FTR 1200, of course). In 1913, though, it was still owned by founders George Hendee and Oscar Hedstrom and still based in Springfield, Massachusetts. The V-twin was a recent invention, created by simply attaching two single-cylinder engines to one crankcase. The one in this race bike is the popular "Big Twin" 60 cubic-inch (998cc) engine with the F-head design favored by racers at the time. It uses a two-speed chain drive, complete with pedals revealing its bicycle roots.

These board track bikes were good at going really fast in a straight line—and nothing else. The turns were banked to help bikes turn at 100 MPH. They often had no brakes at all, relying on coasting and the rider's feet to get them stopped. You can imagine how well that worked. Safety gear was non-existent. Goggles and perhaps a leather riding cap were just about all you got. Fatalities were common occurrences.

This particular flat track racer has been fully restored and will be going up for auction at Mecum in April. The auction listing makes it crystal clear that it will be sold on a bill of sale for display purposes only. Under no circumstances should you ride it on the street. I admit I'd be tempted to fire up this piece of history and take it for a quick spin up and down the road, not at any significant speed, just for the experience of riding a superbike from over 100 years ago. The lack of brakes, however, would probably stop me from doing so. Probably.