This Custom Royal Enfield Cafe Racer Is A Jet-Inspired Dream

Proof positive that Enfield can and should make a factory cafe racer.

When Royal Enfield introduced the Interceptor 650, it set a new benchmark for power, refinement, and value for the storied company. Despite the accolades and success, some enthusiasts longed for a full-fledged factory café racer, complete with bubble fairing and all. While Royal Enfield has resisted those calls, Bangalore-based Bulleteer Customs took matters into its own hands and created a custom café Interceptor 650.

For inspiration, Bulleteer turned to aviation, the Soviet MiG-21 jet fighter to be specific. India is the largest operator of the old Fishbed, so the influence comes as no surprise. To further cement the alliance, the team painted an ‘IND’ on the fuel tank for India and fashioned the tail section as a jet turbine while the actual exhaust route through the bottom of the bike. Aesthetics also align with the fighter pilot motif thanks to faux sheet metal, rivets, and pinups painted on the front fairing and tail unit. 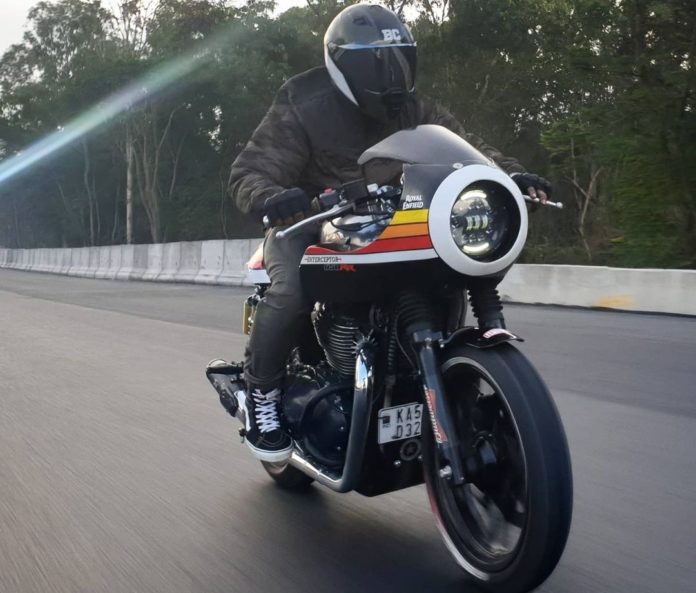 While the left side of the bike clearly draws from post-war aviation, the right side features a ‘70s gradient. The warm hues sharply contrast with the cool, military theme on the MiG-21 side. Though the era mish-mash, is a bit of a head-scratcher, the addition of clip-ons and fork gaiters are no surprise. Aside from changing the gear ratio and adding Akrapovic cans for even bark, the builders left the powertrain alone. After all, 47 horsepower is more than enough for a retro-styled head-turner.

Yes, the custom café racer may be as divisive as its two-faced paint job, but it realizes the full potential of Royal Enfield’s 650 Twin platform. Will the Chennai-based brand ever give us a retro sportbike? Only time will tell, but if it looks anything like Bulleteer Customs’ Fearless 650, we’ll be the first ones in line. 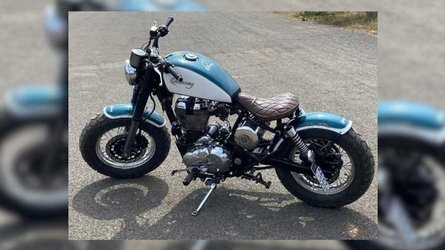 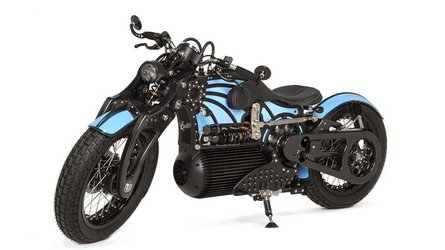