Finally, something cool from Suzuki!

After a 20-year title drought, Joan Mir captured Suzuki’s first rider championship in the MotoGP class. Before the young Spaniard reclaimed glory for the House of Hamamatsu, names like Barry Sheene, Marco Lucchinelli, Franco Uncini, Kevin Schwantz, and Kenny Roberts Jr. made up Suzuki’s racing pantheon. To commemorate the historic MotoGP season, Suzuki will offer liveries harkening back to its championship years with the GSX-R1000R Legends Editions.

Of course, you can’t think of Suzuki racing without Barry Sheene coming to mind, and Suzuki did his illustrious career justice with a faithful recreation of his RG500. From the gold rims to the white-red-yellow paint job to his iconic crossed number 7, the Legends Edition captures the Brit's unmistakable style. Known for smoking cigarettes on the grid and his legendary battles with Kenny Roberts, Sheene was the bad boy of MotoGP. His back-to-back championships in 1976 and 1977 will always be his greatest contribution to the sport, however.

In 1976, Marco Lucchinelli rode for Suzuki as well, earning the nickname “Crazy Horse” thanks to frequent crashes and a wild riding style. After a stint with Yamaha, Lucchinelli returned to Suzuki in 1978 and went on to seize the 500cc title from reigning champ Kenny Roberts in 1981. The Italian rider won five races along with two additional podium appearances that year and the bronze rims and classic livery certainly captures the era.

Just one year later, in 1982, fellow Italian rider Franco Uncini also hoisted the premier-class championship for Suzuki. With five wins and 27 points separating him from the field, Uncini handily retained the top step for the House of Hamamatsu in 1982. The silver rims and royal blue paint job closely resembles the Ecstar Suzuki paint scheme of today, but the unmistakable number 13 with yellow backing pays perfect homage to the title-winning rider.

If there’s a more recognizable rider than Sheene in Suzuki’s ranks, it’s Kevin Schwantz. Known for his epic battles with Wayne Rainey and an entertaining riding style, the Q-Tip achieved MotoGP immortality when he claimed the 500cc title in 1993. The Lucky Strike livery was also an iconic part of motorcycling history and Suzuki replaces the cigarette brand’s logo with Schwantz’s number 34 for the GSX-R1000R Legends Edition. With Schwantz ranking as a fan-favorite, including Valentino Rossi’s favorite rider, we wouldn’t be surprised if this trim sells out soonest.

Son of MotoGP Legend Kenny Roberts, Kenny Roberts Jr was Suzuki’s final championship rider in the 500cc class. With four wins and five podium appearances to his name, Roberts sealed the championship with two rounds left in the season, holding off Valentino Rossi in his rookie year. Suzuki reimagines its iconic blue-yellow checkered flag livery without the Telefonica Movistar branding, of course, and the white wheels add a nice pop to the variant.

Joan Mir’s ascent to the top of the MotoGP ranks was anything but a cakewalk in 2020. After the third round of the championship, Mir had two DNFs a mere 11 points to his name. However, his smooth riding style, consistency, and the Suzuki GSX-R1000RR's stable configuration boosted the number 36 into championship contention. Thanks to a long-awaited win at his home circuit in Valencia and a seventh-place finish the following round, Mir secured the 2020 MotoGP title. The Legends Edition re-envisions the Ecstar Suzuki livery with gold accents to celebrate the momentous achievement.

In addition to the special liveries, an Akrapovic exhaust will come standard on the limited-edition superbikes. Unfortunately for those of us not residing in mainland Europe, the GSX-R1000R Legends Editions have only been confirmed for the old continent. Similar to the upcoming MotoGP season, hopefully, the special-edition Gixxers expand to other territories in 2021. 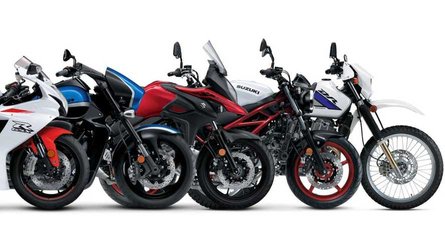 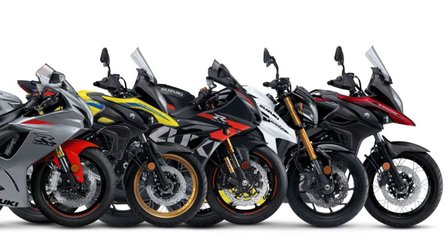