Here Are The 7 Best Used Dual-Sport Motorcycles Under $5,000

Dork in the Road gives us his top picks.

Dual-sports are designed to take a licking and keep on ticking. If you're new to dirt or new to riding in general, chances are you're going to drop it at some point. Why pay extra for a brand new motorcycle when you can get an excellent used one for less money, and that you don't have to worry about putting the first scratch or dent on? Dork in the Road is here to give us his top picks for used dual-sport motorcycles.

All of his choices are from Japan and include all of the "Big Four" manufacturers. In his opinion, these more reliable than choices from Europe and elsewhere. It's also worth pointing out that most used dual-sports already have some modifications to improve the off-road riding experience. The value of these mods is not included in the purchase price. This is bad for the seller, but excellent for the buyer.

The nimble TW200 is a blast on tight technical trails. It's an excellent choice for new riders since it's easy to ride and has a simple reliable engine. It is a bit less capable than some of the other choices on this list, though. It also has a unique rear tire size that limits your selection. Expect to pay between $3,000 and $4,000 for a decent used TW200. New ones sell for $4,699, so don't pay too much for a used one. Similar bikes include the Suzuki DR200 and Kawasaki KLX230S.

Similar to the TW200, the CRF250L is easy to ride and extremely reliable. It's taller than the TW and is best either for intermediate riders or for new riders willing to accept a slightly more challenging bike that they can grow into as their skills improve. It's a capable bike, but its off-road performance does have limits. It's slightly more expensive, ranging from $3,500 to $4,500. Another bike similar to the Honda is the Yamaha XT250.

One staple of the dual-sport community is the DR-Z400S. This bike is best for riders who have some experience in the dirt and are looking for more performance than their 250 at a reasonable price. The DR-Z is extremely capable and quite affordable. It's not beginner-friendly, though, being quite tall and top-heavy. It's also an older design, lacking amenities like fuel injection or sixth gear. At $3,200 to $6,500, if you play your cards right you can sell your old dual-sport and buy a DR-Z on the cheaper end of the spectrum. Other similar bikes include the older Honda XR400R and the newer Honda CRF450L.

Another good choice for riders looking for the ultimate performance in the dirt is the WR250R. It's a newer design, with modern features like fuel injection and sixth gear that the DR-Z lacks. The WR does lack power, though, compared to the DR-Z. It's also slightly more expensive, ranging from $4,000 to $6,000. Another option is the Kawasaki KLX 250S, though only 2018 and newer have fuel injection.

Dork in the Road lumps all three of these bikes into one recommendation because they could all be the one bike you own that can do absolutely anything, on or off the pavement. They'll handle a short hop down the highway and are highly customizable with bulletproof reliability. The downside of these bikes is they're all older designs, carbureted, heavy, and more difficult to ride on tight trails than smaller, lighter bikes. His suggestion is to consider all three, then buy the bike you find the best deal on, whichever it is. You can find the DR650 for $3,000 to $6,000, the KLR 650 for $2,500 to $5,500, and the XR650L for $4,000 to $5,000.

Following this logic is what led me to my own KLR 650. I needed one bike to do it all. I found this particular one for $2,100. It was already equipped with just about every upgrade I wanted, including a Cogent Dynamics suspension worth half the purchase price by itself. I probably would've been perfectly happy with a DR650 or XR650L, but this particular KLR is the right one for me.

By Grabthar's Hammer, What A Savings: 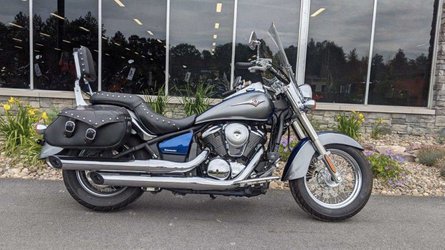 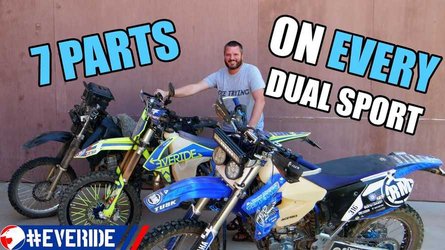 7 Upgrades For All Dual-Sport Motorcycles