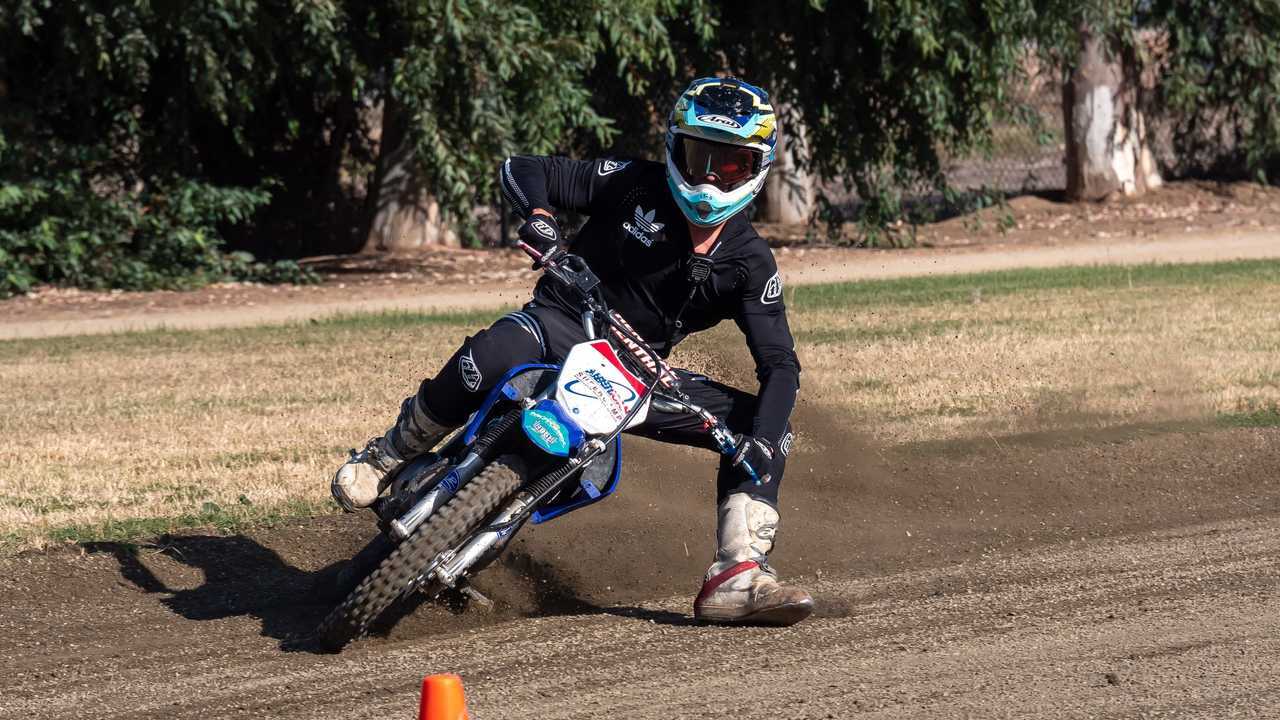 Some say that practice makes perfect. Others argue that it’s perfect practice that makes perfect. Regardless of the cliché you prefer, most of us don’t have coaches reminding us to loosen our grip on the bars or trail brake into a corner. Over time, we typically revert to what’s comfortable, but comfortable is far from fast and rarely safe.

If flat tracking is anything aside from highly challenging and infinitely fun, it’s uncomfortable. The terrain is slick, the posture is precise, and the style contradicts all our road-riding instincts. Instead of leaning into corners, riders stay upright and push the bike down. Elbows are up and out as opposed to tight and tucked. Boot soles drag instead of knee sliders. Despite those differences, asphalt and dirt riding share the same goals—speed and safety—and if you’re looking to develop both, there’s no better place than American Supercamp.

As the brainchild of former road racer Danny Walker and seven-time A.M.A. Grand National Champion dirt tracker Chris Carr, American Supercamp has been “sliding since 1997”. From Delaware to Georgia, from Illinois to Colorado, the traveling technique school brings its corrective curriculum to all regions of our sprawling country. Thanks to its year-round sunshine, California gets a few more sessions than the rest and I wasn’t passing up an opportunity to kick up some dirt at the highly-revered Blackmore Ranch in Murrieta, California.

With all that talent, knowledge, and experience on its side, American Supercamp might sound like a racing school (they do offer race-specific classes) but the fundamentals they uphold apply to all motorcyclists. Whether you’re battling bar-to-bar on the race circuit or weaving through the esses in a local canyon, as long as you’re going to turn at some point, the school’s four principles come into play.

American Supercamp’s tenets may seem elementary but executing each step with consistency and fluidity requires ample skill and even more patience. Though driving into a corner sounds self-explanatory, many of us don’t stay on the gas deep enough into a corner. Yes, we’ve all reduced speed and changed direction but few of us slide the bike to accomplish both. Of course, we all love to get on the gas, but can only maximize drive if we perform steps one, two, and three effectively.

For those reasons, students learn just as much in the Supercamp classroom as they do on the dirt oval. Understanding each step, its aims, and application is critical, but it’s only half the battle. Once the pencils are tucked away and the gloves go on, there’s a whole new education to gain out on the racetrack.

After a few demonstrations by Gagne and Peterson, it was time for us students to climb aboard the school’s TT-R125LE fleet. What the little Yamahas lack in sex appeal, they more than make up in reliability and affordability. Two perfect ingredients for school bikes and Walker wasn’t reluctant to acknowledge that fact.

“Last week, a student crashed so bad they ripped off the exhaust,” Walker recalled during a classroom session. “It was AWESOME!”

Thoroughly dispensable and seemingly indestructible, it’s easy for people to write off the pint-size trail bike, but don't let the sluggish power delivery or sub-ten horsepower fool you. That’s more than enough power to leave you face down in the dirt and several students learned to respect the TT-R on the first go-around.

Following our first session on the track, Walker personally checked each student’s riding position. Welded to a rocking metal structure, the dismembered TT-R turned training tool put my over-eager posture on full display. The problem was evident: I was leaned over the front and stiffer than a neat scotch. Walker had me relax my shoulders and slouch into the Saddlemen seat. With my hips behind my tailbone and my upper half at ease, my legs and hips were left to do the work.

Despite Walker’s best efforts, old habits die hard. Even when the instructors had us hold the gas cap with one hand and steer with the other, forcing us to use our lower half to control the bike, my head was down or my butt was on the wrong side of the seat or my back was too straight. From time to time, I would get all the ingredients right and execute the turn properly just to backslide into my comfort zone in the next corner.

The best pointer of the day came from guest instructor and 12-year-old racer Travis Horn during the school’s infamous mud drill. With course soaked and even less available traction, the slick surface further highlighted your areas for improvement. If you’re leaning into the turn instead of staying on top of the bike, you’d better get the stain remover ready because you’re not going home clean.

After slamming on the brake pedal and stalling the TT-R for the fourth time, the budding racer suggested lightening my brake application. Getting schooled by a pre-pubescent is one healthy serving of humble pie, but you’d be a fool not to take his instruction. With years of experience under his belt, I was in Travis’s domain, and applying his advice would only benefit me, not him.

Luckily (for me), I took Travis’ advice. At the next bend, I shifted my weight over the seat edge, pushed the bars down, and pressed the brake pedal ever-so-slightly. I feared it wouldn’t engage. I thought I’d blow the corner. Instead, I stopped quicker. Without the wheel locked up, I slid less, had greater feel, and could turn the bike more efficiently. In that moment, I made a breakthrough, all thanks to a kid generous enough to share his knowledge.

Moments like that define whether you're interested in actually getting better or just feeling that you’re better. If it’s the latter, American Supercamp probably isn’t the place for you. If you’re open to feedback, however, if you’re willing to do the work to get the results, the investment pays off in the end. After all the stalling, falling, and crawling, somehow everything clicks at day’s end. Everything you learned comes together and finally makes sense just in time for all the fun—on day two.

Another great pic by Karen E. Ott, another stall by me.

The second day at Blackmore Ranch started early. With the sun setting at 5 pm in late fall, the team pushed our start time up to 8 am so we could enjoy more riding. No amount of soreness or crust in my eyes could dampen my spirits after day one’s trials, tribulations, and triumphs and I was geared up by 7:30 am. Unlike, our first 8 hours on the range, Walker and team opened the rest of the dirt track with a TT-style configuration for day two. Counter-clockwise, the circuit consisted of three left turns and one right; clockwise, vice versa.

After a couple free sessions to loosen up and get used to the new course, play ceased and we got back down to work. Out came the cones but this was more than your pappy’s weave drill. To illustrate the lower body’s control of the bike’s steering, Walker had us navigate the track, slalom through nine cones, and get the bike turned around with one hand on the handlebars and one hand on the gas cap.

It’s all in the hips.

Of course, reducing speed to concentrate on form was key, but the feat was challenging nonetheless. With both hands on the grips, my mind tended to focus on pushing the bike down with the bars instead of my knees. The one-handed cone drill allowed me to focus on shifting my lower half to the opposite side of the bike for each turn, all while keeping my eyes up and looking ahead.

The final exercise of the day focused on scrubbing off speed properly. In flat tracking, racers not only use braking and engine braking to slow the rig but increased lean angles help shed speed as well. Throughout the weekend, most of us students were reluctant to fully open the throttle on the little TT-Rs because more speed requires more stopping power and we weren’t quite confident in those abilities yet.

For the braking drill, Walker had us launch from one end of the straight, kick into second gear, and pin the throttle. At the braking cones, we were tasked with cutting the throttle, braking, pushing down the bike, and making the turn. However mild, panic situations typically leave you resorting to old habits and that was the case for our first few runs. Fortunately, coaches Robbie Peterson, Cam Peterson, and Jake Gagne were there to give each student pointers after each attempt.

Coach Cam Peterson showing me that I can carry more speed and lean angle.

If the braking drill verified anything, it’s that I was holding the TT-R back, not the other way around. That fact proved the best component to upgrade on most bikes is sitting right in the saddle. After all, if you can’t get a trail bike turned around a corner and aimed at the exit, good luck with doing the same on a 214-horsepower supersport. With renewed resolve and personalized advice from A.M.A.’s best, I gave it one more go.

To my surprise, similar to the moment at the end of day one, everything clicked. I launched, kicked into second, and pinned it. At the cones, I cut throttle, pushed the bike down, and pressed the brake pedal ever-so-slightly. The rear broke traction, I slid around the turn, and most importantly, I didn’t stall or fall. Sure, I could have shifted more to the top of the bike and slouched into the seat more, but it was a relief to finally piece most of the puzzle together.

Following the braking exercise, we wrapped up day two with a couple more free sessions. Like most schools, those final runs took on a race-like atmosphere but I attribute that to the increased skill and confidence developed over the two-day course, not last-ditch antics. By the final session, the technique was no longer foreign. I didn’t feel like I was fighting the bike or myself any longer. I was just applying what I was taught in a calm and focused manner and that’s a huge testament to the pedigree of coaching at American Supercamp.

You’d be hard-pressed to find a more talented yet humble bunch in any paddock. For that reason, the two-day combined camp felt more like a weekend enjoyed with fellow enthusiasts than a boot camp run by the best of the best. The lighthearted, joke-heavy atmosphere loosened up the students and translated directly to our riding. If humor is an educational tool, Danny Walker has the biggest workbox in the industry. Whether it’s self-deprecating jokes or his epic storytelling, the former road racer ensures that a laugh accompanies the lesson.

Nope, not embarrassed at all, I swear...

If you’re serious about improving your riding on or off-road, pay American Supercamp a visit. With one-day and two-day options offered around the country, there’s bound to be a course that suits your location and schedule. After Supercamp, I frequently correct my own posture, keep my elbows up, and use the rear brake a lot more. The techniques drilled into my head by Walker’s drills make sure that I don’t fall into my comfort zone and back into bad habits out on the road. No, my riding isn’t perfect yet but as long as I approach every ride like it’s practice, I’ll be on my way.

Leveling Up With The Live 100 Percent Supermoto School