Leveling Up With The Live 100 Percent Supermoto School 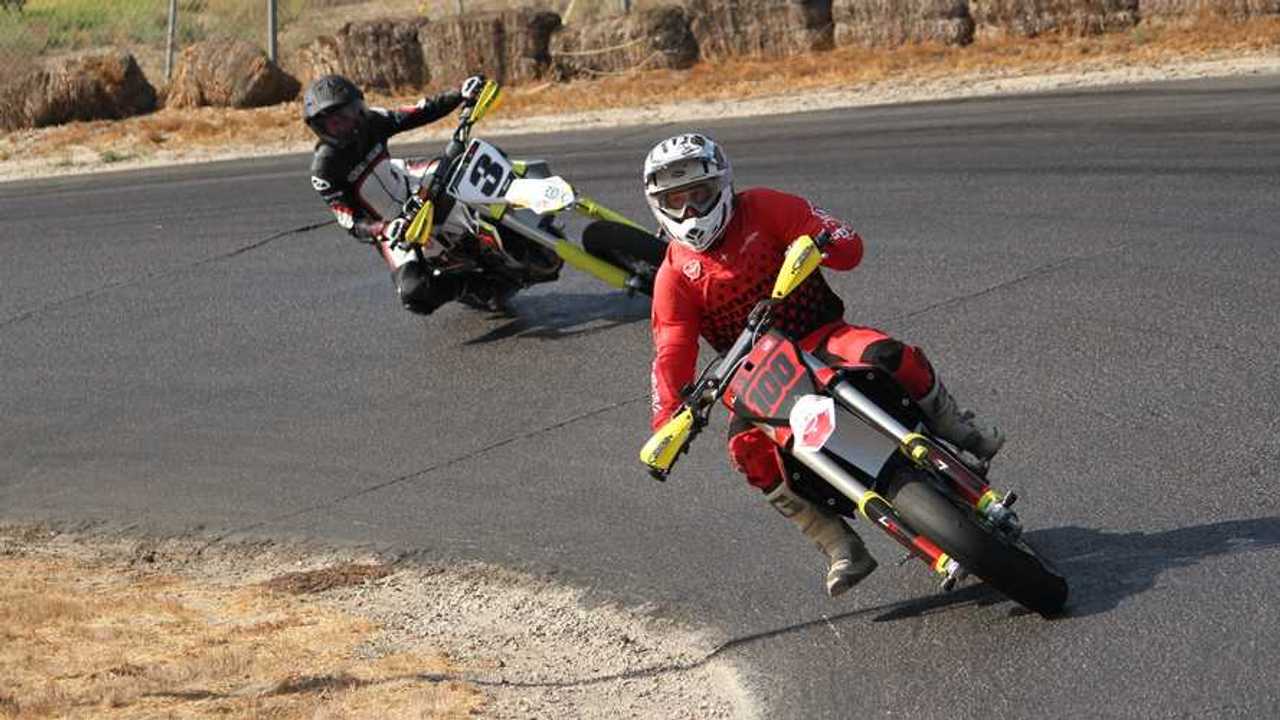 Private coaching on a Husqvarna FS 450? Sign me up!

Those four little words seem so simple on paper, but stringing them together on a motorcycle is another story. With patience, persistence, and a whole lot of practice, riders eventually develop speed and confidence over time. However, when the process becomes second nature, bad habits can creep in as well. That’s when outside advice is needed most, and that’s why Live 100 Percent Supermoto School’s help couldn’t have come at a better time for me.

On a mild Sunday morning in October, Live 100 Percent founder Djamil Sakhri and his team unloaded a long cargo trailer at Adams Motorsports kart track in Riverside, California. The humming of generators echoed off nearby portables. Four 2019 Husqvarna FS 450s idled, filling the early morning stillness with a throaty exhaust note and the sweet scent of 91 octane. In less than 15 minutes, the dusty gravel parking lot became a competition-worthy paddock and I hadn’t even wiped the crud out of my eyes yet.

Unlike another supermoto school held at the same southern California kart track, Live 100 Percent’s moto-village rivaled that of a professional team. The Husqvarna race machines, branded canopies, and high-spec equipment reflected the school’s ambitious curriculum and established a focused learning environment for the day. If SoCal Supermoto is SM 101, Live 100 Percent is SM 401 with lab classes and personalized tutoring.

Despite the school's top-notch gear and racing pedigree, the coaches never scoffed at a novice question or squandered an opportunity to work one-on-one with a student. From setting up the tire warmers to operating the dirt bike stands, no detail was too small to cover. Thanks to the hands-on approach, every procedure felt relevant to our main objective. We not only understood what we were doing but why we were doing it and how it benefitted us on the track.

From road racers to enduro riders, from beginners to seasoned competitors, the students couldn’t have presented a more diverse array of skills for the coaches to assess. Of course, our track performance would expose our true strengths and shortcomings and whether we needed help with braking, race lines, or drive. With the paperwork signed and the morning brief delivered, it was time to hit the circuit for the day’s first session.

My maiden voyage around the course consisted of brake checks and a gentle right wrist, but by the third lap, I found myself barreling headlong into a double-apex corner. Hard on the brakes, banging down the gears, I swept past apex one and drove hard past the second. I had my braking markers, I had my tip-in point, I had my rhythm—or so I thought.

Arriving back at the paddock, Sakhri did what all good teachers do, he complimented me. He noted how quick I acclimated to the bikes. He praised my confidence. After sufficiently sugaring the pill, Sakhri pointed out my major flaw. I tend to scoot up too far on my seat as I ride, resulting in a squirming rear end under heavy braking. Over time, I’d grown accustomed to the instability, writing it off as a side effect of going faster and braking harder. In one concise conversation, Sakhri showed me that it’s easy to confuse confidence with speed and that riding harder doesn’t equate to riding faster.

Now, body position can be a contentious topic. Some swear by leg out. Others stick to knee down. While heated debates have raged for ages, Live 100 Percent didn't discriminate—they taught both. Leveraging one of the school’s unused bikes, the coaches had us practice each technique from the safety of the paddock. No sending $10,799 supermoto skittering into the gravel trap. No wasting valuable track time with trial and error. Just two experts showing us proper form in a safe and controlled environment.

Thanks to this exercise, I started locking my limbs into the bike and loosening my grip on the bars. This allowed the FS 450’s suspension to handle road irregularities and steer much quicker while I avoided the dreaded arm pump. Despite the team’s experience and authority, they always framed their advice as an option, not as an obligation. The team understood that personal preference plays a big role in comfort and comfort plays a big role in performance. It’s that learning environment that encouraged experimentation on the track and an open exchange of ideas off of it.

Armed with new-found knowledge, I rolled back onto the track with a clear objective. This time around, expert instructor Etai Naor joined us on the track and helped turn theory into practice. Yes, Naor rarely passed up an opportunity to back it in or pop a dank wheelie, but as Sakhri put it, “great riders pull you along with them,” and under Naor’s tutelage, I gained a much better understanding of everything from racing lines to cornering speed and braking zones.

Etai Naor giving me a tow around the track.

Over the six track sessions, we studied rider footage and examined track maps. We discussed optimum drive onto the straight and exchanged gearing choices. It felt less like we were competing for an instructor’s attention and more like an open forum for racers. By the last session, I felt physically drained, but mentally prepared. I wasted fewer movements. I developed more rhythm. I gained more speed. Live 100 Percent proved that I needed to get out of my comfort zone to get better, and that definitely applied to the dirt section.

Sliding the rear wheel around the tarmac can be a pretty dangerous proposition, so when it came time to learn how to back it in, the crew opted for a more forgiving surface—the gravel-strewn parking lot. As Sakhri noted earlier in the day, “supermoto braking is 70 percent front, 30 percent rear, and 100 percent engine braking.” No, the screwball arithmetic doesn’t make much sense, but it does illustrate the importance of combined braking control.

In order to slide the rear, we needed to accelerate, shift into second, build the revs, downshift, and apply the brake pedal. This would allow us to drift around the two cones at opposite ends of the range. Before any of us climbed aboard the school’s Yamaha TTR 230, Naor demonstrated the maneuver with little effort. Weaving a figure-eight pattern around a few markers seemed like an easy task until I threw my leg over the bike and all my confidence swiftly evaporated.

I have to admit that I’m partial to the asphalt so it’s safe to assume that I struggled in the dirt. If I came in with too much speed on one run, I didn’t apply enough brake in the next. If I built enough revs on my approach then I missed the cone instead. While I’m a fish out of water on the loose stuff, I understood how it helps develop your road-riding skills, and that prospect kept me pushing forward.

After failing for the better part of 10 minutes, the process started to click. Brap, shift, more brap, downshift, brake, lean, even more brap—repeat. Easy, right? Throughout the session, Sakhri and Naor delivered feedback and pointers with each pass. Thanks to their support, I strung together a few decent turns and kept the bike from taking a dirt nap. Yes, the struggle was real, but I ultimately gained more feel, more confidence, and a new understanding of traction limits.

Before attending the Live 100 Percent Supermoto School, I thought my confidence on the bike was unshakeable. I thought it was something that beginners had to work on, not experienced riders. This experience showed me that confidence on a motorcycle is fluid and only to your advantage when it’s based on sound teachings and techniques. Similar to a muscle, it took breaking down my confidence in order to build it up even stronger, and the Live 100 Percent crew is primarily responsible for that.

Yes, the Husqvarna FS 450 is an absolute beast. Yes, the trackside equipment is top of the line, but the most valuable thing Live 100 Percent has is its people. That brain trust of motocrossers, enduro riders, and supermoto studs is worth more than a pack of fancy European race bikes and some premium tire warmers. The knowledge, support, and confidence you gain justifies the price alone and will last much longer than a ride on an FS 450. Whether you ride dirt, race mini-bikes, or carve canyons, the Live 100 Percent Supermoto School can help you take your riding skills and confidence to the next level.

Do You Even Supermoto, Bro?

Getting Down and Dirty with SoCal Supermoto School