The 890 Adventure lineup gets new base model.

Less than two weeks after the surprise debut, KTM teased yet another launch. This time, we got two teasers to keep us guessing along with the promise of an October 19 launch. Keen-eyed followers suggested Team Orange was about to launch a third 890 Adventure model, a road-oriented base model. Sure enough, on October 19, KTM unveiled its all-new entry-level 890 Adventure.

As speculated by KTM's followers on social media, the new model is in fact a more street-oriented version of the 890 Adventure. While the bike features a lot of the same components found on the higher R trims, some of the components have been tweaked to make the model more touring-friendly.

The 890 Adventure receives a taller windscreen, a slightly wider steering head angle, a low front fender rather than a high-set mudguard, adventure tires, an adjustable two-piece saddle, WP APEX suspension front and back, and KTM My Ride app compatibility with navigation. It looks like the bike is also sitting a little lower on its suspension as it doesn't require to have as much ground clearance and suspension travel as its R counterparts.

Some of the features shared between all three trim levels include the Chromium-Molybdenum-Steel frame that uses the engine as a stressed member, the sump guard, hand guards, high-set exhaust, optional cruise control (the switch comes standard), and anodized wire-spoke wheels. They also receive cornering ABS, Motorcycle Traction Control, and an engine knock control system that allows the user to fill up on lower-octane fuel.

At its core, the base 890 Adventure uses the same 889cc parallel-twin as the rest of the family, rated at 105 horsepower and 73.7 lb-ft of torque and paired with a six-speed transmission.

While KTM has yet to announce the pricing scale for its new 890 Adventure lineup, the base model will become available in November, 2020. 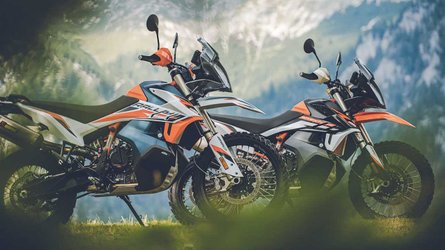 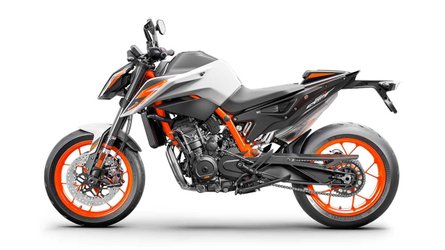