Yamaha’s annual Yard Built competition has produced some of the finest custom motorcycles since 2014, and this year’s winning bikes are no different. What is different in 2020, however, is the Back to the Drawing Board theme, which calls for fan-made designs of the brand’s approachable yet rowdy XSR700. No stranger to the contest, the sport heritage model has spanned the design gamut from retro dirt bike to futuristic café racer.

Thanks to the talented designers, drawers, and builders, Yamaha revealed its latest crop of fresh XSR700 Yard Built customs and added to the already illustrious stable.

Designed by Spanish drawers Alex and Claudio Monge, the Red Tail harkens back to Yamaha’s flat track glory days. Spain’s Café Racer SSpirit (CRSS) build team made sure the custom bike captured that heritage by borrowing the tail section, angular gas tank, and number plates from the storied race machines. The builders also stripped away the tank shrouds and engine side covers to make the naked even naked-er. Of course, the paint steals the show as it seems the crew went out for a blast before the red speed blocks could dry. All jokes aside, the Red Tail certainly turns heads whether you’re a purist or an avant-garde fan.

Taking another cue from the 1970s, Italian drawer and XSR owner Ugo Coppola dreamed up a throwback to Yamaha’s RD350. Pier Francesco Marchio of Italy’s Garage221 took up the design and transformed the XSR700 a lovely rendition of the old two-stroke. Leveraging parts from the MT-09, SC950, and XJR1300, Marchio and sons captured the RD350’s spirit while staying true to Yamaha’s current design language. Yet again, the spot-on orange rust paint scheme delivers on the promise of Coppola’s design.

From Portugal, Rua Machines built the subtle and stripped-down 700GT based on a design by their customer Tony Manuel Oliveira Queiros. Blending elements of café racers and 1960s scramblers such as the YR-2 and YR-3, the team built another callback to Yamaha’s rich heritage. The front disk wheel and fork covers make the front end seem much more substantial while the large headlight and exposed radiator deliver a utilitarian look. Thanks to the restrained color combination and classic silhouette, the 700GT will be a favorite of classic bike lovers.

What can we say about the Disruptive that hasn’t already been said? Yes, the design is progressive and aggressive. Yes, we enjoy the streamlined bodywork and black and yellow motif. No, we weren’t surprised when it won the design contest, and no, we didn’t expect Parisian custom shop Bad Winners to realize the absolute dream that France’s Barbara Motorcycle put on the page. The sharp angles, the minimalist aesthetic, the muscular stance all shine through with Bad Winners’ build. Fitted with an R1 front end, we’re sure this street tracker’s performance matches its menacing aura. While the build relies the most on custom parts, it’s a great example of what Yamaha’s models could be in the future while staying true to its past. 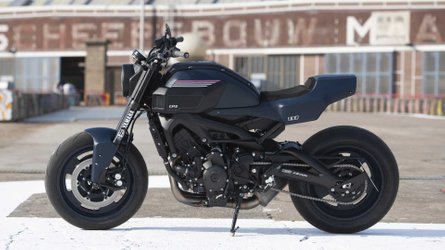 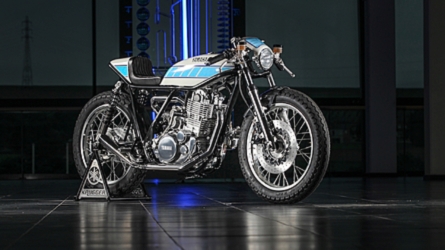