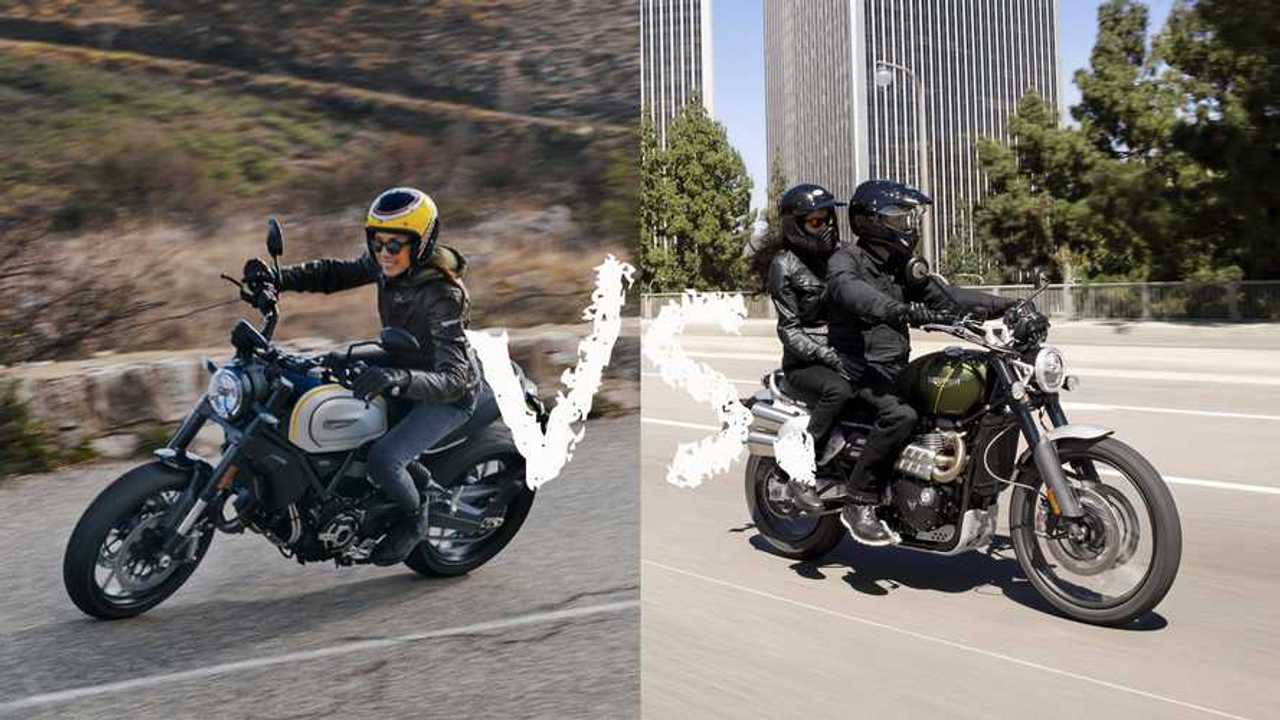 Modern classics are trending and the hype shows no signs of slowing down. Whether it’s café racers or scramblers, it seems like everyone from manufacturers to custom shops are getting in on the vintage fad. Modern-day scramblers combine 21st century technology with old school styling, sprinkled with a dash of off-roading ability. Some manufacturers get creative with the names, including the Van Van, the Svartpilen, and the Atlas. Others keep it simple and stick with the Scrambler moniker—which can make identification tricky. “Did you try the new Scrambler?”- “Which one?” You get the picture.

Ducati jumped on the scrambler bandwagon in 2014 with the introduction of the Scrambler 400 and 800. The bigger 1100 model followed in 2018, and a year later, the Italian firm introduced the Scrambler 1100 Pro, a bike that it describes as the “most complete model ever”. An Italian scrambler. That’s cute. Italians are known for their fiery sportbikes, so how does their version of a scrambler compare to an OG British one? Triumph provided us with ideal opponent for the Ducati when it introduced its duo of Scrambler 1200s at the end of 2018. Italy versus England. It looks like the World Cup all over again but this time, it’s about bikes.

Despite the 121cc difference, the Ducati and the Triumph produce a similar power figures on the pony front. The Ducati produces 86 horsepower and reaches its peak around the 7,250rpm mark while the Triumph gets to take full advantage of its 89 horsepower at 7,400 rpm.

Torque is where the two bikes greatly differ. The Triumph produces a healthy 81 lb-ft of torque, optimized at 3,950rpm. The Ducati produces 65 lb-ft of torque and reaches its peak power further up on the dial, at 4,750rpm. While on the road they ultimately both provide a fun and efficient ride, off-road, the Triumph’s lower torque peak and higher overall power figures give it an edge. Low-end grunt is a great tool to have on the trails.

The weight must also be factored in and interestingly, despite its smaller engine and air-cooled powertrain, the Ducati is two pounds heavier than the Triumph and produces less power. Another interesting discrepancy is the fuel economy. The Ducati isn't as efficient as its British counterpart  with a fuel consumption rate of 5.2L/100km or 45 mpg versus 58 mpg for the Scrambler 1200. This means that you will get roughly 180 miles out of a single tank on the Scrambler Pro and a range of about 245 miles on the Triumph.

Scrambler by Name or by Design?

Though both bikes are scramblers by name, the two models aren’t treated and marketed the same way. While the Italian Scrambler proved its off-roading chops on countless occasions, it looks like Ducati decided to market the Pro as a more refined, tarmac-friendly option.

In comparison, the British Scrambler is marketed as a sort of jack-of-all-trades. Triumph emphasizes its model’s versatility on and off the asphalt, far more than Ducati. Sure enough, when you look at the two motorcycles, you notice just how different the scrambler aesthetic was applied.

On the Triumph, for instance, exhaust system is tucked away, high up on the frame. A narrow curve in the piping allows the entire network of pipes to run along the top of the chassis, out of harm's way once the rider ventures off-road.

Ducati is more conservative in its scrambler approach with the Pro.

The exhaust on the Ducati wraps around the engine and runs along the bike’s underbelly without so much as a skid plate to protect it. This exposes the exhaust to potential damage and increases the risk factor should the rider venture out on a more rugged or even jagged surface.
Surprisingly, there's no skid plate on the list of factory accessories for Ducati’s Scrambler—only a belly pan, which isn’t nearly as sturdy. You might want to turn to an aftermarket part retailer to outfit your Pro properly if you decide to hit the trails.

Another noticeable difference in how Italians and British do scrambler: the wheels. The Triumph uses a set of wire-spoke wheels—a proven design when it comes to ensuring off-road durability—while the Ducati features a more modern light alloy wheel design.

The two Scramblers are armed with a slew of electronic features, once again tuned for different purposes. The Ducati features three riding modes (Active, Journey, and City) that have more to do with road adventures than with off-road ones. They pretty much translate to Sport, Touring, and Urban—there’s no off-road mode available. The model also comes with Ducati’s proprietary traction control system with four settings ranging from less to more intrusive. The system can also be turned off altogether, an asset for off-road riding, but keep in mind that the ABS can't be turned off.

Triumph plays the off-road card up, all the way to the top.

The Scrambler 1200 features four ridings more: Rain, Road, Sport, and Off-Road, plus a customizable setting that allows riders to create their ideal, personalized setup. In addition, the Off-Road mode is multi-layered and not only remaps the throttle input, but also disconnects the ABS at the rear wheel and selects an off-road-optimized traction control setting. The traction control can also be completely turned off, however, much like the Ducati, the ABS cannot be completely disengaged (only at the rear wheel).

Both models use a ride-by-wire system which makes the throttle input more responsive but any road-side fix ups more challenging. The fact that the Desmo engine is air-cooled (versus the Triumph’s liquid-cooled) removes a level of difficulty when it comes to maintenance but it also doesn’t cool things off as efficiently as on the Triumph, especially if you’re doing a desert run in the scorching heat.

The base Triumph also gets a kit of Brembo brake hardware—with standard ABS of course—but swaps Marzocchi and Kayaba for Showa and Öhlins suspension components. It uses a TFT display and offers five riding modes—there are no separate traction control settings.

If you wish to up the ante, the Ducati Scrambler 1100 Sport Pro adds a slew of features including adventure tires, Öhlins suspension, a low-slung handlebar, and a matte black livery. The upgrade will cost you $2,000 for a total of $15,495.

The Scrambler can also be upgraded to the 1200 XE which adds off-roading capability thanks to a bigger fork (47mm), a wider handlebar, a taller saddle setup, and an available Off-Road Pro mode for advanced trail versatility. The XE is priced at $15,400.

Don’t get me wrong: the Ducati is an absolute hoot and, as previously mentioned, proved on several occasions that it’s a capable off-roader, particularly the 800 version. If your dream is to own a versatile Ducati, you’ll be perfectly happy with the Scrambler. People who want a Ducati want a Ducati. There's no substitution for Italian passion.

On paper, however, the Triumph outshines its Italian opponent in almost every aspect.

Ultimately, you only need to answer one question: how serious are you about off-roading? If all you’re looking for is a bike that will tackle a Sunday ride in gravel and sand, then either models have the capacity to fulfill your desires.

If you’re a seasoned trail rider looking for the most rugged and versatile model out of the two, then chances are the Triumph will be a better match. Ducati can give you lots. The Triumph can give you more.