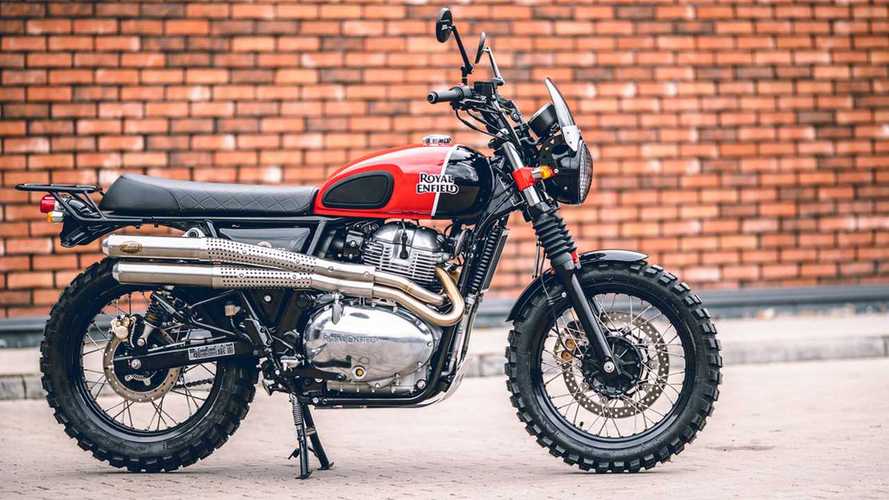 There's a catch: You'll have to go to Latvia to buy this limited-edition machine.

Want a Royal Enfield scrambler? It’s something we’ve heard gossip about for years now, but the Indian manufacturer has been dragging its feet on the idea. There’s always the Himalayan, but that is really more of an adventure bike. That was no problem for Latvia’s Royal Enfield subsidiary, though. Instead of grumbling about it, the Latvians went ahead and ordered their own special-edition scrambler.

The Royal Enfield Interceptor MCH was built by Moto Classic House. It’s a custom take on an Interceptor 650, but it’s not wild—it's a sensible overhaul of the machine, and that should keep costs down.

Other Takes On The Interceptor Scrambler:

The MCH scrambler’s dual high-mount pipes are the first thing you notice, fitting right into the modern idea of what a scrambler should look like. These leg-burners were built by Zard, and supposedly cut about 25 pounds of weight when compared to stock exhaust. Moto Classic House also re-tuned the ECU so that the engine flows air better with the new exhaust.

For safety, Moto Classic House put a minimalist skid plate between the front fork tubes, a must-have add-on if you’re planning to bash your bike through bumpy terrain. A low-profile wire headlight guard provides protection from flying roost on the trails, and a small flyscreen cuts a bit of wind without looking obtrusive.

The scrambler gets a small luggage rack as well, and a set of proper Michelin Anakee knobby tires. Not that you’ll be wanting to push this thing hard in the dirt, though; the Latvian Royal Enfield website doesn’t mention any suspension upgrades, and the rear shocks appear to be OEM equipment. That would be OK for sensible speeds on smooth gravel roads, but don’t expect this bike to perform hard enduro work.

The Royal Enfield Interceptor MCH appears to only be available in Latvia for now, but if it’s a sales success there, maybe we’ll see something similar sold around the rest of the world. Or maybe not. Royal Enfield subsidiaries have been selling limited-production runs of semi-custom scramblers for years, but the mother corp still hasn’t gone ahead with a mass-market launch, despite the demand.