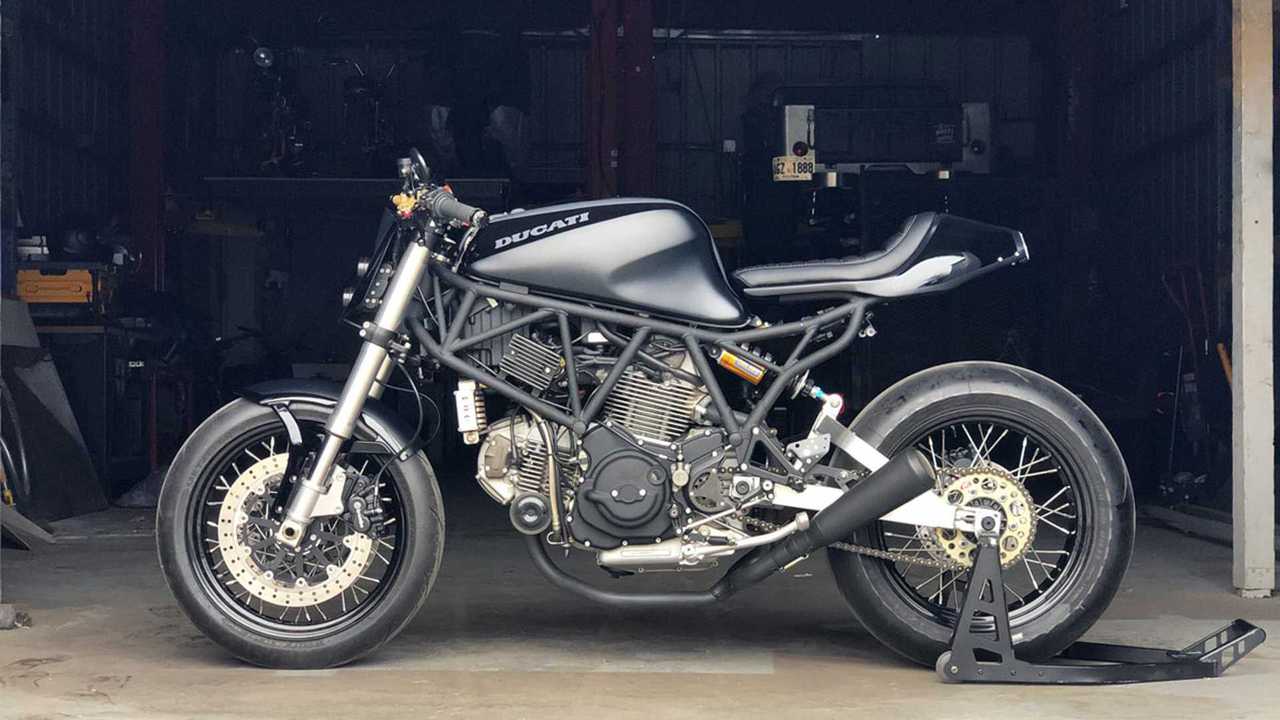 This bike is equally at home ripping it in the twisties, or sitting in a gallery.

The Ducati 750 SS has been among the Italian manufacturer’s most popular models for more than twenty years. Since its initial release in 1973, the Ducati 750 SS has gone through numerous updates featuring design enhancements as well as improved performance. It made a decent 64 horsepower out of its 748cc desmodromic L-twin engine. It also featured a wet multiplate clutch for smoother engagement, as opposed to the dry clutches found on Ducati sportbikes, known for their iconic rattle.

Given the bike’s sporty stance and ergonomics, the bike makes for a perfect platform for an aggressive and sporty build. This is something Jesse Spade, a custom builder based out of downtown Atlanta, Georgia, took advantage of with this gorgeous custom. Jesse has a long history in customizing Jeeps and off-roaders. It wasn’t until after 2016 that he begun venturing away from four-wheelers, and into the wonderful world of custom motorcycles.

Starting life as a 1999 Ducati 750 SS, Jesse’s custom creation dubbed Terremoto 3, features an aggressive, retro-styled street fighter aesthetic. The bike’s owner, Michael Givens, commissioned Jesse to create a masterpiece out of the 750 SS. Interestingly, Michael wasn’t in possession of a Ducati 750 SS for Jesse to work on. So Jesse sourced this particular bike at a local repair shop and took it to his workshop.

As you can see, much of the 750 SS has been changed, with just the frame and engine remaining from the original bike. Featuring completely bespoke bodywork from the tank to the tail, Jesse completely transformed, not just the look, but the overall feel of the bike. For starters, the front suspension was swapped out in favor for the adjustable suspension from a Ducati 900 SS. The rear sports an Öhlins monoshock attached to a 900 SS swingarm. A set of Ducati Sport Classic GT1000 spoked wheels were sourced to give the bike a classic look—which, when mated to the aggressive stance, makes the bike look totally badass.

A unique feature of the Terremoto 3 is it’s lighting setup. Consisting of parts from HID specialists Morimoto, as well as LED components from Motogadget, the 750 SS now features an insectoid pair of headlights upfront. To top it all off, the black paintwork was performed by J Daar customs. Experimenting with different finishes of the same color, the bike features a sublime combination of matte and gloss finishes giving it a thoroughly classy look.