This Harley-Davidson Ultra Classic Is A Dangerous Predator

There's something out there waiting for us, and it ain't no man.

Say you’re a person who likes to scour bike auction listings. You’re cool with wrenching, and you like finding bargains that you can fix up. Maybe you want to flip them, or maybe you just like to test your mettle against the worst abuse that people can inflict on their bikes. You know, just to see if you can bring them up to scratch. It’s good for your skills, and besides, you like a good mechanical puzzle.

Let’s also suppose that you find a mid-90s Harley-Davidson Ultra Classic at one such auction, and it’s seen better days. When it finally arrives, it’s in better shape than you expected it to be from the report, because the auction company was clearly in pure CYA mode and rated everything as being in totally reprehensible condition. So really, anything less than a complete horror show would be a pleasant surprise. This bike isn’t awful, but it kinda needs an engine transplant. What should you swap in?

In The Shadows Of Giants: 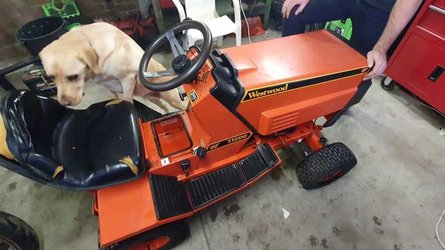 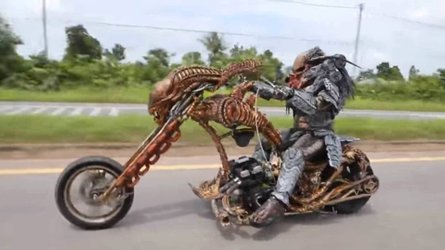 I’ll save you some time. The most glaringly obvious answer is clearly a 212cc, 6.5 horsepower Harbor Freight Predator lawnmower engine. It comes straight off the shelf at your favorite purveyor of cheap parts, tools, and that unique lightheadedness you can only get from the fumes as soon as you walk in the door. I mean, that’s $120 well spent, amirite?

That’s exactly what the guys from SRK Cycles did with their $2,200 bargain auction find, and boy, did it deliver. You want loud pipes? As observed here, this bike is even louder and vibier than ever before. As observed twice by different people throughout this video, it leaks oil like a champ to mark its territory when parked. Not only that, but it can manage a top speed of around 53 miles per hour, so it’s totally ready for highway cruising!

I mean, I admit that it’s probably not the first thing you’d expect when someone says something about a ‘Harley lawnmower.’ Still, sometimes the greatest joys in life come in completely unexpected forms. The great part is, if you want to do a swap like this, you don’t even need to be near Nashville to go buy yourself this Predator. Got some good weekend plans? You do … now.