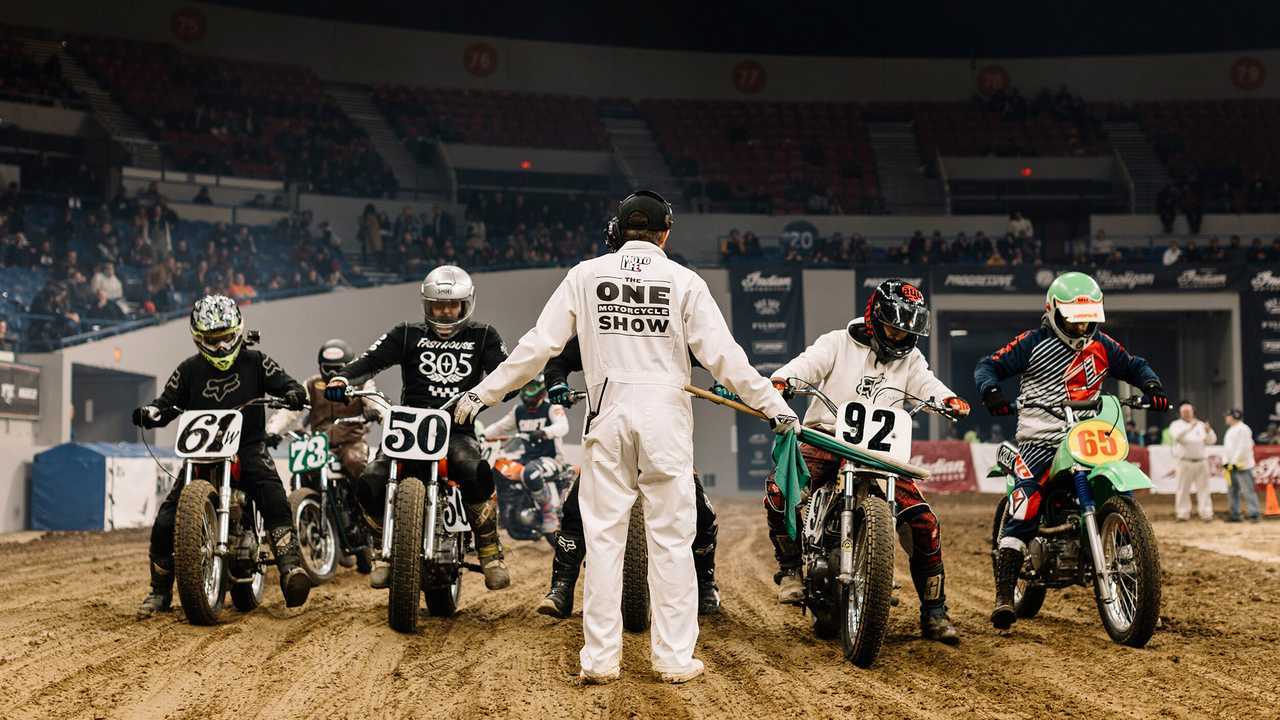 The One Photo Show.

In its 11th year, Portland’s The One Moto Show has developed into something beautiful. The annual custom motorcycle show and dirt flat track racing was invented as a place for all of motorcycle culture to come hang out at one event. Everyone from chopper riders to dirt racers to moped gangs and electric bike fiends like myself are welcome. If you’re into bikes, or even if you aren’t, you’ll find something at this show that will blow your mind.

2020 Women's Motorcycle Show Beckons You To LA This February

For the first ten years, the show had a grungy underground feel to it, with the static display motorcycle show taking place in an old concrete industrial building—with no insulation and terribly inadequate heating from tube kerosene blast heaters—and the dirt flat track racing happening at a fairgrounds almost an hour drive away. For 2020 the whole shooting match moved into the Veterans Memorial Coliseum, right smack in the middle of everything.

I overheard at least a dozen people mention that the show had lost some of its counter-culture punk rock feel. And while true, putting everything under one roof is the path that The One Moto Show really needed to move in order to make it feel like a proper cohesive weekend of two-wheeled shenanigans. Attendance for both the custom motorcycle show—in the basement—and Saturday night’s flat track racing—in the arena—showed a marked increase in attendance. It was flat out packed, and for good reason. It’s a hell of a party.

On Friday night I walked into the basement of the event center to see a field of hundreds of custom and vintage motorcycles on display. I could barely spend two seconds looking at one thing before something ten yards away would catch my eye and I’d be off to see what amazing thing I’d spotted.

The vintage restorations were just as exquisitely done as the incredible variety of custom bikes. Big old American bikes were dotted around from the teens, twenties, and thirties, interspersed among brand new electric conversions, home-brew weirdos, and big-dollar chopper rides with pristine chrome and enough metal flake in the paint to make a bass boat blush.

Also on the floor were a few of the bikes that would be raced in Saturday night’s dirt track showdown. The juxtaposition between these hard-ridden dirt machines and the freshly-finished show-only pieces was a big part of what makes this show great. Throw in a few salt-flat top-speed machines, and some other daily riders and you’ve got the gist of the show.

It was interesting to see the shift in trends from 2019 to this year, as there were significantly more electric motorcycle customs entered in the show this year. I think I recall two or three from last year, including the Blatant Moto Alta Redshift custom flat tracker—which was back this year to compete in the flat track dirt races! The basement show this year, however, had fifteen or twenty electrics.

Oh, and did I mention the incredible atmosphere of this show includes live music, great food, lots of beer, and See See coffee in case you need a pick-me-up? Yeah, it’s got everything you need in a weekend of two-wheeled fun. And if you feel like braving the February PNW weather—it’s worth it—there are some great riding roads not too far away!

So let’s raise a toast to The One Moto Show for being the something-for-everyone motorcycle show that really brings the community together. Winter is long, but this show always serves as a big boost to my own personal two-wheeled enthusiasm which lasts at least until the spring thaw when I can put boots to pegs.

Well done to the whole crew. What a great time.