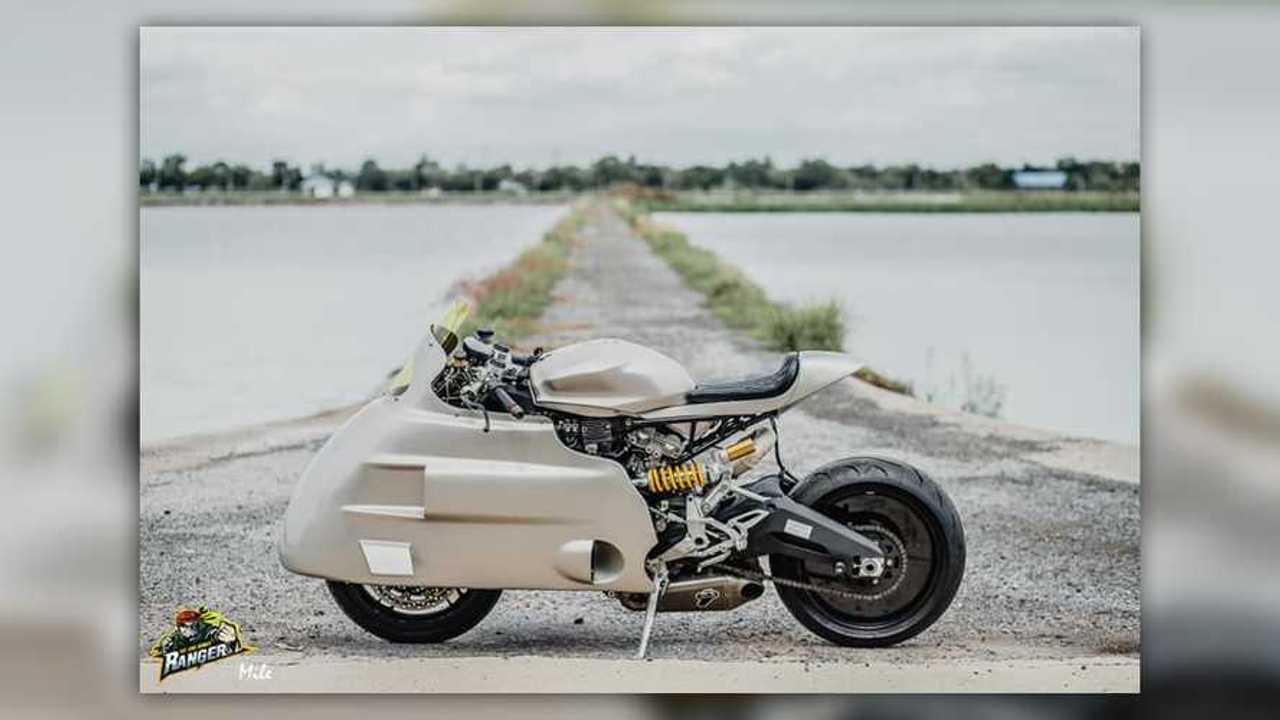 A Panigale fit for a spaceman.

The Ducati Panigale 899 isn’t exactly known for being a bike that people chop up and customize. Oh, most Panigale riders do little things like swapping out the exhaust or the mirrors, but nobody is crazy enough to just go hog-wild on the beauty from Bologna. Straight out of the factory gates the bike is an absolute stunner. So when you start talking about tearing off the body work and building your own, people are going to get understandably nervous. Ranger Korat from Thailand did just that, however, and built this brain-busting sci-fi beauty.

The Panigale 899 is the 1199's baby brother. While it is a little smaller, and a little more affordable, it still has 131 horsepower and will run the quarter mile in less than ten and a half seconds. So, “baby brother” is a relative term. It’s also packed full of all the gadgets and gizmos that will hopefully stop you from turning yourself into a long smear on the pavement.

The custom fairing is the focal point of the entire build, and is just a gorgeous piece of design. It has massive intake scoops on each side, and vents towards the rear. The highlight, of course, is the pair of little winglets at the bottom. I don’t even care if they’re effective. They’d make me feel like a fighter pilot every time. A yellow Perspex screen finishes it off and really pulls the vintage theme together.

Out back, the designer fabricated a new tail section that might be even more dainty than the factory Ducati piece. The curves of it echo classic cafe racer vibes, but with a bit more flair and panache. This isn’t a track weapon anymore, it’s an alternate universe transplant.

A Termignoni exhaust, complete with exhaust wrap, injects some gritty industrialness into what is otherwise a very flashy bike. The black wheel covers obscure the rear brakes and wheel spokes and mimic the look of old school steel wheels, reinforcing that old school industrial look.

I just can’t get over how out of this world the whole machine looks, and would never guess that there’s a race-bred Ducati underneath it all.