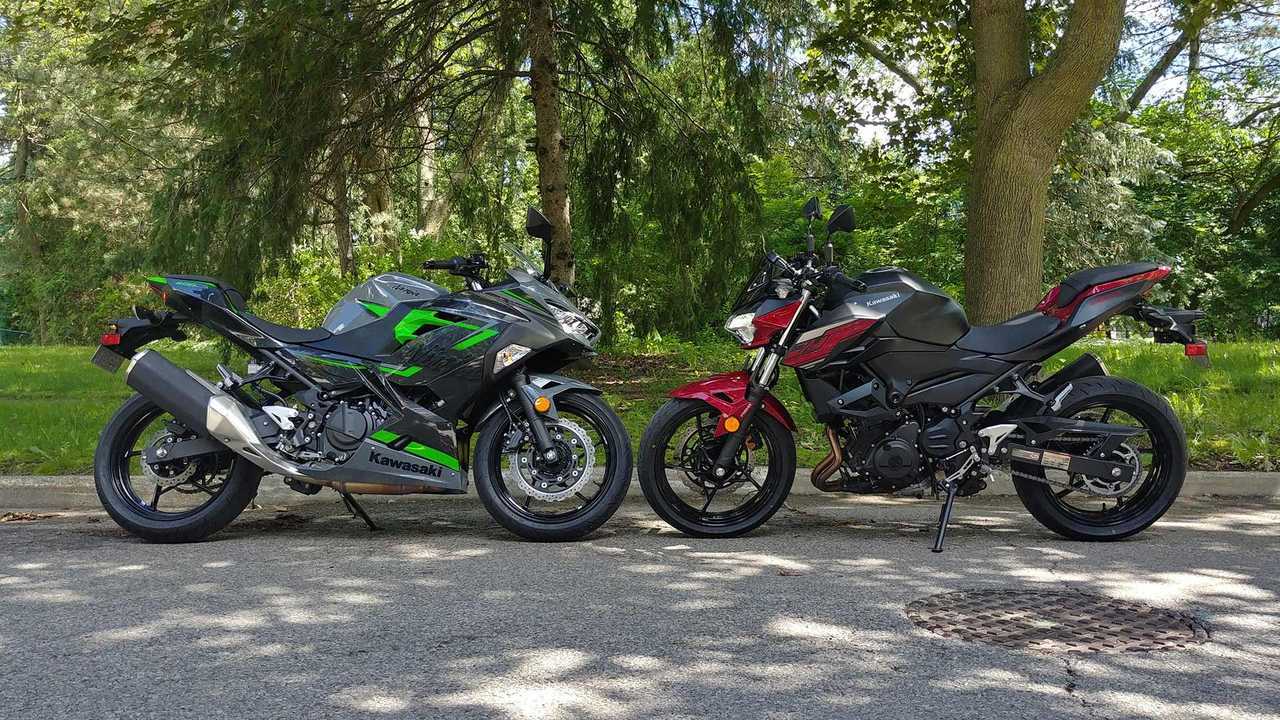 A Kawasaki demo day shows just how effectively it can work when it's done right.

Platform sharing is the name of the game these days. The fewer platforms and drivetrains a company can get away with making for its full lineup of motorcycles, the less expensive they are to produce, the more they sell, and the more they profit. Kate and I spent the last couple of days riding more examples of Kawasaki's offerings than we can count at a local demo event, and I am honestly blown away by how well Kawi is playing this game.

All Shapes And Sizes:

Take the Z900, for example. That was the first bike I rode. It's a good large naked sportbike. It performs extremely well but lacks the bodywork and ultimate performance of a Ninja. Then I hopped on the Z900RS. It looks almost exactly like the old Universal Japanese Motorcycles of the 1980s I spent much of my early riding career on. The ergonomics are much more comfortable and less performance-oriented than the Z900, as befitting the type of bike it is. The funny thing is that under its retro looks, it's still virtually the same naked sportbike. Though much more comfortable than the Z900, it feels just as quick and handles like a modern motorcycle rather than the 1970s UJM it resembles. It's a comfortable retro-styled bike with the heart of a sportbike.

Even mechanically identical models like the Z400 and Ninja 400 have their own unique look and feel, as Sabrina and Sophia discovered. I won't rehash what they said here, but I will add that despite me not being a sportbike kind of guy, I genuinely enjoyed the Ninja 400. Maybe that's because during sedate riding, it didn't feel like a sportbike. It was small, light, surprisingly comfortable, and super predictable. Bring the revs past 7,000, though, and I found myself wondering whether it was really just a 400, as well as it accelerated. It's a sportbike a new rider can definitely grow into that won't buck them off while they're getting used to riding for the first time.

Kawasaki's widespread sharing doesn't always work, though. I rode both the Versys 650 and the Vulcan S. They both share the same 650 parallel twin. This works in the Versys 650 (which, I should note, claims no off-road performance creds whatsoever anymore, despite its adventure bike design). When I rode the Vulcan, though, I was surprised to find the only thing about it that resembled a cruiser was the feet-forward riding position. I just spent a few days riding an Indian Springfield at Sturgis. I spent a week on and surrounded by "real" cruisers. The Vulcan felt like a Z650 with a long wheelbase and nothing like a true cruiser. This could be a good thing if you want the cruiser style with traditional Japanese performance characteristics. If you're looking for the traditional experience of an American cruiser, though, you'll be sadly disappointed. Personally, I like the Vulcan for what it is, but it's absolutely no competitor to Harley or Indian when it comes to the so-called "real bikes."

While nobody's perfect, my experience at the Kawasaki demo ride showed me just how well the widespread engine and platform sharing works when it's done right. I know that Kawasaki is far from the only company doing this, but after experiencing six bikes in four hours, it's the example that sticks out in my mind.

For the record, the one I'd own would be the Z900RS. The nostalgic design plus modern performance are a winning combination for me.